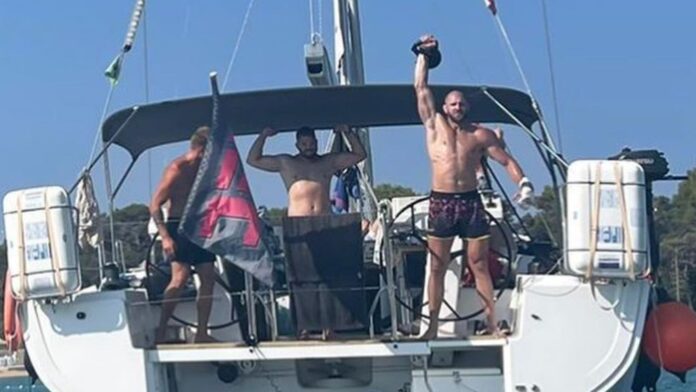 Recently crowned UFC light heavyweight champion Jiri Prochazka will spend the summer on vacation in Croatia. Just like many of his compatriots, the Czech fighter has chosen the Adriatic sea and Croatian coast as his destination.

In mid-June, he won his belt against Glover Teixeira after only three fights in the world’s most popular MMA organization. He followed Volkan Ozdemir, Dominick Reyes, and finally Glover Teixeira and after his great success, he was welcomed as a god in his native land.

Now he has decided to take a little rest, as he has no match arranged yet, although he announced on social networks that he would like to face the last opponent he fought, Teixeira, in the ring.

Namely, Jiri has a very refined taste when it comes to yachts. He chose a yacht that is one of the best yachts in the category with a lot of additional equipment and things related to various things to have fun at sea.

We did not get an answer to the question, of with whom Jiri travels since it is a business secret, but from Jiri’s Instagram profile we can see that Jiri does not travel alone but in the company of two friends.

What we managed to find out is that Jiri is staying in Croatia for two weeks and that he will spend one week in the northern part of the Adriatic and the other in the southern part. It is known so far that he was in Novalja and visited Zrće. He enjoys not only the Adriatic sea but also the mountains

We found out from Jiri’s manager that he will spend the second week in Split. It’s the second largest city in Croatia and one of the main tourist destinations.  where he announced that Jiri will also visit the Jiu Jitsu academy in Split, Infinity BJJ Split, and spend the rest of the week on a yacht on the islands.

If you ask us, there is certainly no better combination than yachting and Jiu-Jitsu combined.

Although Jiri once emphasized that he does not do Jiu-Jitsu but only ground and pound, we learn from the media that Jiri regularly trains Brazilian Jiu-Jitsu as part of his regular preparations.

For the next two weeks, he will be on his annual training, but it is not known if he will spend the entire period in Croatia, it is known so far that he was in Novalja and visited Zrće. He enjoyed not only our sea, but also the mountains, and he spends time with his family and friends in beautiful Croatia.

Why did Jiri choose Croatia for his yachting vacation?

Well, it’s not a secret that Croatia is a leading yachting country in the Mediterranean and is known for its stunning coastline, clear waters, and friendly atmosphere. The country has over 1,000 islands, many of which are uninhabited, making it a perfect destination for those looking to explore. There are also plenty of sheltered coves and bays to anchor in, making it a safe and enjoyable place to sail.

Croatia is a great destination for both experienced sailors and those new to the sport. The country’s extensive coastline and numerous islands offer something for everyone, and there are plenty of charter companies that can provide you with everything you need to enjoy a sailing holiday in Croatia. So whether you’re looking for an adventurous sailing trip or a relaxing break in the sun, Croatia is the perfect destination.

As Jiri already visited Zrće which is known for its summer parties it’s pretty likely he’ll continue partying in Split and the islands near Split like Brac and Hvar where parties are happening 24/7 in the summertime.