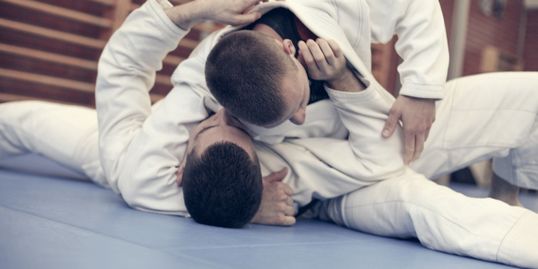 I will never ever forget my first Judo training session, Nor the first few weeks of training, for that matter. A huge reason for that is just one single, painful and annoying position. My nightmares are due to the fact I was on the receiving end of it. Later on, of course, knowing how powerful it can be, I became quite proficient at it. So normally, when Brazilian Jiu-Jitsu entered the frame, I thought I had a secret weapon. It turns out the position doesn’t really do well unless you go for a few simple, yet crucial modification. In Judo, the position is called Kesa Gatame. the subject of today’s article, though, is the BJJ scarf hold.

There are plenty of old-school grappling techniques that somehow found their way into BJJ. Especially when BJJ was on the rise, before a unified rule set and all that, people were experimenting constantly. Since BJJ still had no clear outline, the Gracies took everything in, from Judo to catch wrestling, as long as it worked. For a while there, BJJ went into a slight stagnation period, in terms of its openness towards moves from other grappling martial arts. Lately, though, Jiu-Jitsu is back on the evolution fast track. A huge factor here is the will to experiment with moves and/or positions coming from other arts. Things that did not work as well before might be killer techinques in modern Jiu-Jitsu. Like the BJJ scarf hold, for example.

Getting someone in a scarf hold is as instinctive as it can get. Well, not exactly in a BJJ scarf hold pers say, but still. Even children when they get in a scrape often go for a sort of a headlock that ultimately ends up in what we know as the playground scarf hold. There’s something about controlling the head of another person that guides us instinctively to look for it even under distress. So why not use such a natural instinct to our advantage? Especially when we’re already in a sport that involves controlling the head, neck and every other body part of another resisting person. The scar hold is a very useful position to use in BJJ. While it has no practical merit whatsoever as a takedown move (despite success on the playground), it does offer control and submission options suitable for all levels.

The Scarf Hold AKA Kesa Gatame

Let’s look at the basic Judo version of the BJJ scarf hold. The original Kesa Gatame position is, in essence, a side control variation. The goal is to use one arm to wrap the opponent’s head from the far side. The arm should fo as deep as possible around the neck, so that it comes out on the other side. The goal here is to have rotational control over the head, while also picking the head up. This bends the spine, making it almost impossible to move. As if this isn’t enough, pulling on the head of your opponent additionally bends the neck to the side, making the position extremely uncomfortable.

The goal of the other arm is to control the near arm of the opponent. This is a key thing to remember if you want any success with the BJJ scarf hold. In particular, you need to keep the opponent’s elbow off the ground at all times. A C-grip on the back of the triceps, along with a closed elbow is more than enough to keep their arm trapped for good.

Your body should be facing the opponent, your ribs on the side of their ribcage. the hips should be low on the mats, with the bottom leg extended forward and the other one back. The further out your legs are, the heavier you’ll be.

Finally,  your head needs to be down low, right next to the opponent’s head. Aim to place your forehead on their near side shoulder, grinding the side of the face if need be.

Looking form ore information on the traiditonal Judo style Kesa Gatame? Check out the “The Judo Academy” DVD by Jimmy Pedro and Travis Stevens! Master it and nobody is going to escape your scarf hold ever again!

Controlling From the Scarf Hold

In terms of Judo, the Kesa game offers such complete control, that unless you know very specific escapes there’s no way out. This was exactly why I was so frustrated as a Judo beginner. The coach had me trying to escape Kesa Gatame fro close to a month before showing me a way out. The next couple of months were all about keeping the position and controlling an opponent.

The trouble with the Judo version is that in Judo, you can win by pinning an opponent for a short period of time. In BJJ, an opponent is going to find a way out eventually, or you’ll be penalized for stalling. Plus, there are a few more escapes than the standard Judo one. All this means that controlling the BJJ scarf hold is a dynamic effort, rather than a static one.

Since the scarf hold is a variation of side control, it doesn’t land you any points on its own but works perfectly to stabilize a pass, which brings 3 points. So keeping someone there is good for a while until you tire them out and make them uncomfortable. Ultimately, you’ll have to either transition or submit them. For control purposes, look to place the palm of the hand you have wrapped around the opponent’s head on the inner thigh of your bottom leg. This will torque the head even more and allow you to adjust your hips for transitioning without losing position.

Also, be wary of the positioning fo your legs. You’ll need to keep your back leg active and very low to the ground because a simple hook can open up a path to your back.

The first and easiest submission is one from Judo. The one thing you can attack without sacrificing any of the control you have is the trapped arm. Since you already have control of the elbow and a good grip, hitting an armbar, is extremely easy. Simply extend their arm, using your bottom leg as a fulcrum. To finish, you can put your foot and press down, or use your leg to hook and pull back for a brutal and fast finish.

Another really easy thing to get from the BJJ scarf hold is an arm triangle, Once again, the position is nearly set, as you have the arm around the head. You also have great control over the opposite side arm, requiring just a slight setup. Often times opponents make it easier by pushing on your head. All you need to do is brush their arms past and drop your head down to lock the choke in. From there, you go belly down and finish your arm triangle.

The final submission is a slightly unusual, yet brutally effective one. It is a catch wrestling move that Josh Barnett used to submit Dean Lister at Metamoris. The chest choke is similar to an arm triangle, up to a point, After you get their arm to their neck, instead of dropping down you push with your hips and lift their head even further. The goal is to use your ribs to put pressure on their chest while pulling via an S-grip with your arms.

Improve Back Control With The Body Triangle