Martial arts are the backbone of people that are in the military or law enforcement. Or at least they should be. Sadly, nowadays, the image of the overweight police officer is much easier to connect to law enforcement that an in-shape grappler in uniform. While body weight has nothing to do with the ability to grapple, it does point to one’s character. Overall good health and good physical shape are absolutely mandatory for those that have chosen to protect and serve. Jiu-Jitsu for law enforcement is another must, arguably even more important than the former two. It has the ability to keep officers safe, allow them to control multiple different situations and even brings about health and fitness benefits. So why is this ultimate tool not thaught to the eery single person that puts the uniform on?

Jiu-Jitsu saved my life. This is a common statement we hear and read almost daily. However, very often this statement is taken well out of line. While I respect everyone’s story and how BJJ has positively influenced it, the phrase is not just a metaphorical one. In fact, for some people, it is as literal as it gets. There are countless examples of why Jiu-Jitsu for law enforcement should become something officers simply have to do on a regular basis. Multiple testimonies of people that have embraced the Gentle Art privately, show how useful it can be in difficult situations on the job. Brazilian Jiu-Jitsu can literally save lives and law enforcement members have the right to use the best tools at their disposal!

Grappling is considered by many to be the ultimate martial art. While there’s no such martial art out there, grappling martial arts certainly have an everyday application. As corny as it may sound, most fights really do end up on the ground. Take into account that the very reason BJJ was created was self-defense, and the case for grows even stronger. Furthermore, the art doesn’t have any particular strength requirements. It is also based on control, with various options of turning the intensity up or down. Grappling also gets people into shape while getting them ready to defend themselves and others. You can see why training Jiu-Jitsu for law enforcement members seems like a good idea. Let’s elaborate on that.

Law enforcement officers are a community that gets exposed to physical and psychological stress on a daily basis. Throw in the air of uncertainty about what they’re walking into during each call and you have the definition of a difficult job. This is why law enforcement members receive (or should) very specific and efficient training. But is the training they go through enough?

Brazilian Jiu-Jitsu for law enforcement officers is one option to supplement regular training. It offers many different aspects of hand to hand combat, all of which are highly important for law enforcement. First and foremost, the formal training they receive is short and specific as it may be, definitely not enough (excluding elite units). Secondly, law enforcement officers are bound by law and rules when they enter violent altercations. The ability to methodically apply more intensity to their reactions is not available via non-grappling martial arts.

There is also the size/gender issue. While not taking anything away from women, or elderly people, size and strength really do make a difference. Going up against a 250 lbs grown man in an altered state of consciousness is a hard ask of anyone. Now imagine that a 120 lbs woman or an officer nearing retirement have to restrain such a person. Even worse, imagine the person is armed. It is a recipe for disaster and all those scenarios that officers go through in training rarely play off the same in real life.

Jiu-Jitsu for law enforcement brings a host of benefits that can make officers safer, calmer and better at executing their duties.

Obviously, a huge aspect of restraining someone is controlling. There are multiple videos out there that show how har controlling an unwilling person can be, even if an officer has a backup. Furthermore, there are people resisting arrest that do not merit the use of more power, like tasers or striking. This is where Jiu-Jitsu for law enforcement comes in. Subduing a suspect is not going to be easy, but it is going to be much faster and more efficient with a solid BJJ background. 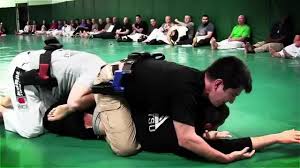 Another example of control is holding someone down until backup arrives. Obviously, the moment an altercation hits the ground, BJJ reigns supreme. If you know how to handle yourself on the ground, you’ll have no trouble keeping even a much larger person at bay. It may be until you get handcuffs on, or waiting for backup. It may even be in order to prevent them from accessing a weapon. Whatever the case, BJJ is the best tool you can use.

Very importantly, the control Jiu-jitsu offers is a dynamic one. It means you can transition between points of control, always begin a step ahead of the opponent.

People often deem Jiu-Jitsu to be ineffective as a self-defense art. The reason for this is the perception of people. The image of BJJ today is that of sports Jiu-jitsu, laden with rules and formats. However, a simple look back at the roots of BJJ clearly shows that the art works. Another testament to the efficacy of Jiu-Jitsu is, of course, MMA, both the early days and now.

For law enforcement purposes, the most important thing is staying safe. Instead of going into an exchange of strikes, BJJ allows officers to counter strikes with grappling. This both keeps them safe and provides them with the upper hand. Knowing how to counter a strike and close the distance so that you gain control over an opponent and prevent further strikes is something everyone in BJJ learns. Why shouldn’t our officers know it too?

Forma a fitness standpoint Jiu-Jitsu for law enforcement is a full package. Simply going through a good warmup and a series of drills is enough to maintain a good overall shape. Add to that rolling and you have the perfect way of both training practical self-defense and getting in top shape. 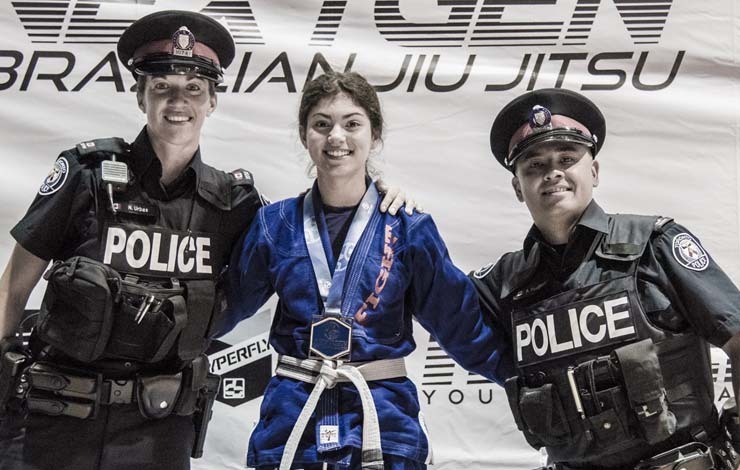 Psychologically speaking, BJJ helps people learn how to react calmly under stress. The unpredictability of the art places people under pressure in every roll, making them comfortable in discomfort. This means the decisions they make under pressure are not a rash one, but deliberate and precise.

Spending so much time rolling with people also sharpens instincts and reaction time. it is one thing to train Krav maga during your entry course, but a whole different thing to roll every other day. The more time you spend sparring, the better your response time is going to be, especially when things escalate quickly and unexpectedly.

A very helpful resource to supplement your Jiu-Jitsu training is Jay Wadsworth’s DVD “Police Self Defense Tactics For The Street”. It offers a grappling based way of dealing with common law enforcement situations as well as with unexpected ones.