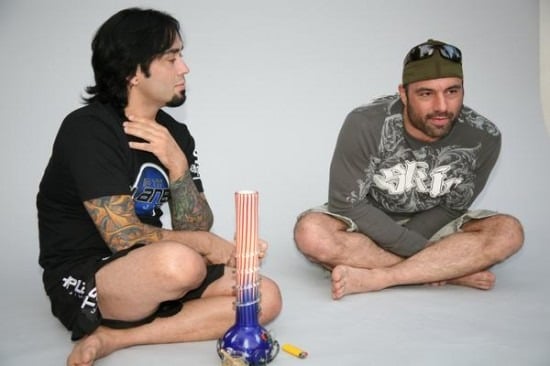 Imagine going to a BJJ tournament high. now imagine that you can actually get high right then and there, mat-side. Furthermore, imagine if the prize for winning the tournament was a pound of weed. Up until a few years ago, many people only dared dream of such an event. In today’s world though it is now a reality. The “High Rollerz” BJJ Gi Tournament offers winners of each division a pound of weed. It seems redundant to debate the subject of smoking in today’s society, but somehow, the BJJ community remains firmly divided on the subject. Weed and Jiu-jitsu are either the perfect combination or two things that don’t mix. It all depends on who you ask. Unless you’re rational about it and simply look at the evidence which is exactly what we’re going to do today.

Grappling martial arts are tough and complicated arts in nature. Brazilian Jiu-Jitsu stands out even among other grappling martial arts in that context. The elaborate maze of ground fighting that is the focus of BJJ is arguably the most creative martial arts platform out there. In BJJ, you can literally do whatever you want. Most of the things you do intuitively will only get you tapped, but you’ll still learn valuable lessons. So, it is very normal that such a creative endeavor gets connected with marijuana. Weed and Jiu-Jitsu seem like a match made in heaven. and they probably are. The whole problem with it is perception, nothing more. Of course, there are positive and negative effects of smoking weed but today we’ll focus on positive effects related to BJJ training and weed usage.

Today, weed has been proven to have a host of benefits on the human body. Weed’s effects on both the mind and body active been thoroughly researched now. It’s nothing scary or unknown anymore, and it’s definitely not just for couch potatoes. It is not the devil’s spawn either, nor is it going to make you eat children and defecate demons. It’s just another vegetable, and just like other vegetables, it comes with specific benefits of consumption. So, weed and jiu-jitsu, do they work or not? let’s settle the debate!

Weed And Jiu-Jitsu: The Perception Issue

As I mentioned previously, the main trouble with weed and Jiu-jitsu is perception. How can people involved in a sport also be involved with drugs? It goes against everything we’ve been taught. yes, it does, but that’s because we’ve been taught wrong. It’s all about perception and some rooted beliefs that make no sense. And I have the perfect example to make things clear.

The relationship of weed and Jiu-Jitsu is much like one of the leg locks and BJJ. Or, at least it was. Leg locks were deemed to be ineffective, cheap moves that people used as shortcuts. Why and how this came to be is not the subject today and everyone knows the history. The point is, it turned out after years of avoidance, that leg locks are actually one of the best weapons in BJJ. Despite all abundant evidence on their effectiveness, the Jiu-jitsu community still remains highly divided on the subject. Weed and jiu-Jitsu are the same.

And, just like with leg locks, weed has it’s pioneers in the grappling world too. Nobody is more vocal about it than 10th Planet Jiu-Jitsu founder Eddie Bravo. So, no wonder that he was the referee at that High Rollerz tournament I mentioned. A video of the tournament went viral after BJJ standout Jeff Glover and his opponent of the night shared a joint right before stepping on the mats to grapple. Referee Eddie Bravo did not part take, but probably only because he was already high.

Your Mind On Weed

Let’s get into the actual effects of weed. Since BJJ is not one of those sports where your mind can go wandering off, let’s look at the mind-marijuana relationship first.

When we’re rolling in BJJ if there’s one thing that we need it is the focus. There’s no space for any thoughts not related to grappling on the mats. And weed sharpens that focus like nothing else. It helps your mind reduce all clutter and just work on the issues each and every roll presents right there, at the moment. Furthermore, it opens up new avenues of problem-solving, which, in Jiu-Jitsu, is only a good thing. Most people that enjoy weed and Jiu-Jitsu find their rolls much more productive and creative when they roll high. Also, it helps reduce anxiety and nerves, which also play a major role during rolling or competition.

Another thing weed and Jiu-Jitsu have in common is flow. Being high and rolling are tightly related to the flow state. Weed helps your mind get into that “flow zone where your rolls are seamless and just keep on going. It is Jiu-Jitsu at it’s finest and weed is a great way to find your flow.

The physiological effects of weed on athletes are now nothing mysterious. There is much research, both completed and ongoing on the subject, that sheds light on something that was once a mystery. The healing properties of weed are now a common knowledge and people use them throughout the world. As marijuana gets legal, it’s medicinal properties come to the forefront.

In terms of benefits for grapplers, one huge thing that people use it for is recovery. Weed greatly reduces inflammation and soothes muscles, allowing for faster recovery between training sessions. Since we all know that grappling is the thing that’s addictive, we’re all looking to be back on the mats as soon as possible after finishing the class. Weed helps our muscles relax and fight inflammation so that we can go and roll again.

Another positive aspect of combining weed and Jiu-Jitsu is tissue oxygenation. Weed allow more oxygen to get to our tissues, making them able to work at a higher rate. For the effect of increased tissue oxygenation, you need to have weed in your system while you roll.

Get high, pick up the Brandon McCaghren “Rubber Guard: The Meathook” DVD and go deep into the quintessential 10th Planet position. Then, get high again, and go practice the techniques from this DVD on the mats!