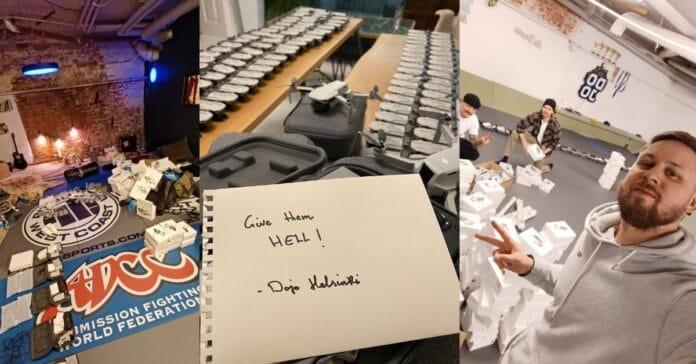 Along with a few of his students and friends, Henri Lindroos organized an impressive feat in just two days – they acquired delivered 140 drones to aid the Ukrainian military, spending 50.000 Euros and personally delivering the drones. Henri Lindroos is a BJJ black belt from Helsinki, Finland. We got to talk to Henri, in order to find out exactly how the BJJ community from Helsinki came to the idea and rapid realization of this project.

Contents hide
The Idea
How did the idea of providing drones to help the Ukrainian military come up?
The Realisation
What are some of the major obstacles that had to be overcome in executing this amazing feat in just a few hours?
The Impact
How are the drones going to help the Ukraine forces?
The Folks Behind The Project
So, who are the people representing the Helsinki BJJ community that realized this brave project?
What’s Next For The DOJO Helsinki BJJ Community?
Any other upcoming projects of a similar nature? If so, what are ways in which people can help?

How did the idea of providing drones to help the Ukrainian military come up?

“The idea came from one of the students in the gym, Andres Brotherus. He had just returned from Poland, after helping with a delivery of a van full of Kevlar vests for the Ukrainian military troops.”

Already looking to do more, Andres came about a list of things that the Ukrainian military has an urgent need of. Among the items listed were about 20 drones. Given that he already had the contacts that arranged the Kevlar vests pick up and delivery to the front lines, he decide to procure the drones…and then some.

Instead of the 20 drones requested, Henri and Andres with the help of two more friends and fellow BJJ practitioners, Valtteri and Tomi actually bought 140 drones.

What are some of the major obstacles that had to be overcome in executing this amazing feat in just a few hours?

The initial contact about the entire project came when Andres contacted Henri at 23:30 on Tuesday night. They found an online site that was ready to accommodate their order and was also ready to deliver the drones immediately. The company that provided the drones charged them 50.000 euros, which is actually the price they paid for the drones (the regular price would’ve been over 80.000 euros). In fact, it was the largest overnight order ever provided by said IT firm, one of the bigger ones in Finland.

Once the drones arrived at the 24/7 kiosk, Henri and his girlfriend transported them on several trips to the BJJ gym Henri runs, which is nearby the kiosk. In the gym, they unpacked the drones and started to charge the batteries, so they are ready to use immediately. Moreover, they wanted to re-pack the drones into smaller packages, easier to carry for delivery.

The issue was that they couldn’t use regular cargo delivery routes, because time was of the essence, Instead, they opted to do the delivery themselves, using a commercial flight to go from Helsinki to Warsaw, Poland.

By the way, while we talked about the entire ordeal, Henri jokingly mentioned that he is “sorry for the mess left at the gym during the process of charging and packing the drones, but know the BJJ community won’t mind“.

After researching how the rules and regulations in terms of how many batteries per person are allowed on carry-ons, they figured that they could only take less than half the drones with them. They opted to check in the drones instead, utilizing the help of friends that lived near in order to obtain enough luggage bags to fit all 140 drones.

This is where the hard part came in – traveling on a commercial flight with 140 drones in checked-in luggage without alerting customs.

The first issue happened during check-in, with one of the bags exceeding the weight limit. The guys had to repack it, trying to be as casual, yet secretive about it. After all, the packages were as shady as they come.

The second part was the real issue – will customs flag the huge amount of battery-powered drones in the bags? Henri along with Andres and Tommy boarded the flight 40 minutes before takeoff, hoping for the best. They did reach out to a contact that is highly placed with airport security, and they did not officially acknowledge they would help.

Basically, they had no idea if the drones were on the same flight as them until they got to the luggage claim at the Warsaw airport. “Luckily, all the bags and drones got through, and it was easy to send them to the front lines via local contacts from there”. 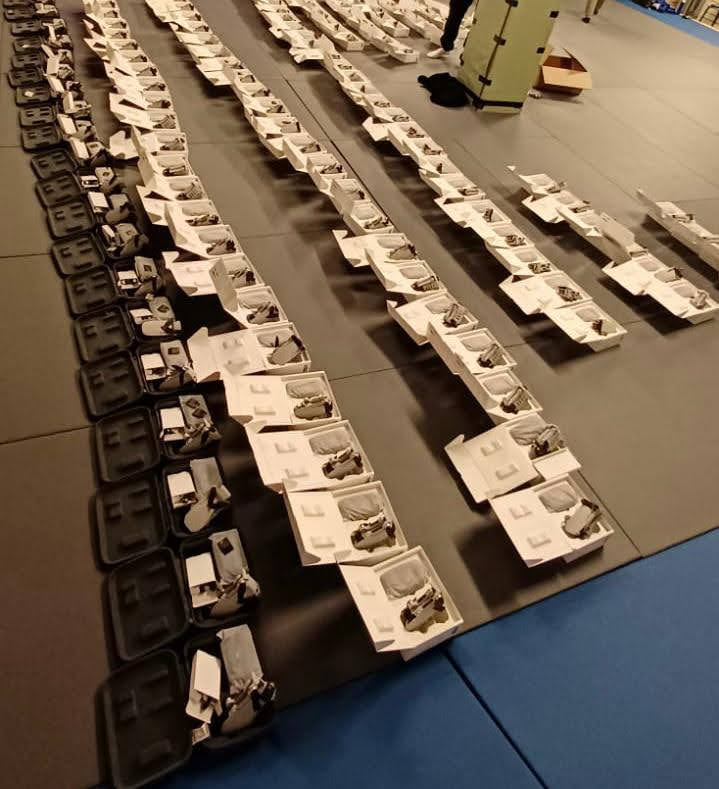 How are the drones going to help the Ukraine forces?

Despite being a big part of the BJJ community in Helsinki through his academy, Henri is also in the Finnish military. When asked about the role the drones would have he explained that “the Ukrainian military forces have to patrol huge areas while only having small units at their disposal. Drones will massively help with patrolling the suburban areas, providing crucial intelligence against the Russian troop movement.”

Moreover, the drones will be of great use in urban settings as well. Delivering the drones fully charged and in a much higher number than originally requested by the military forces is going to immensely help with reconnaissance and information gathering.

The Folks Behind The Project

So, who are the people representing the Helsinki BJJ community that realized this brave project?

Andres Brotherus is the man who came up with the original idea of providing drones to the Ukrainian military. He also founded the project himself. Andres is a white belt who trains regularly and takes lots of private lessons with Henri.

Valtteri Koskimaki is also a white belt in Henri’s academy, who generally loves to help out with stuff like this project.

Tommy Keinanen completes the Helsinki quartet of charitable grapplers. A blue belt in the academy, Tommy traveled with Henri and Andres to help deliver the drones. 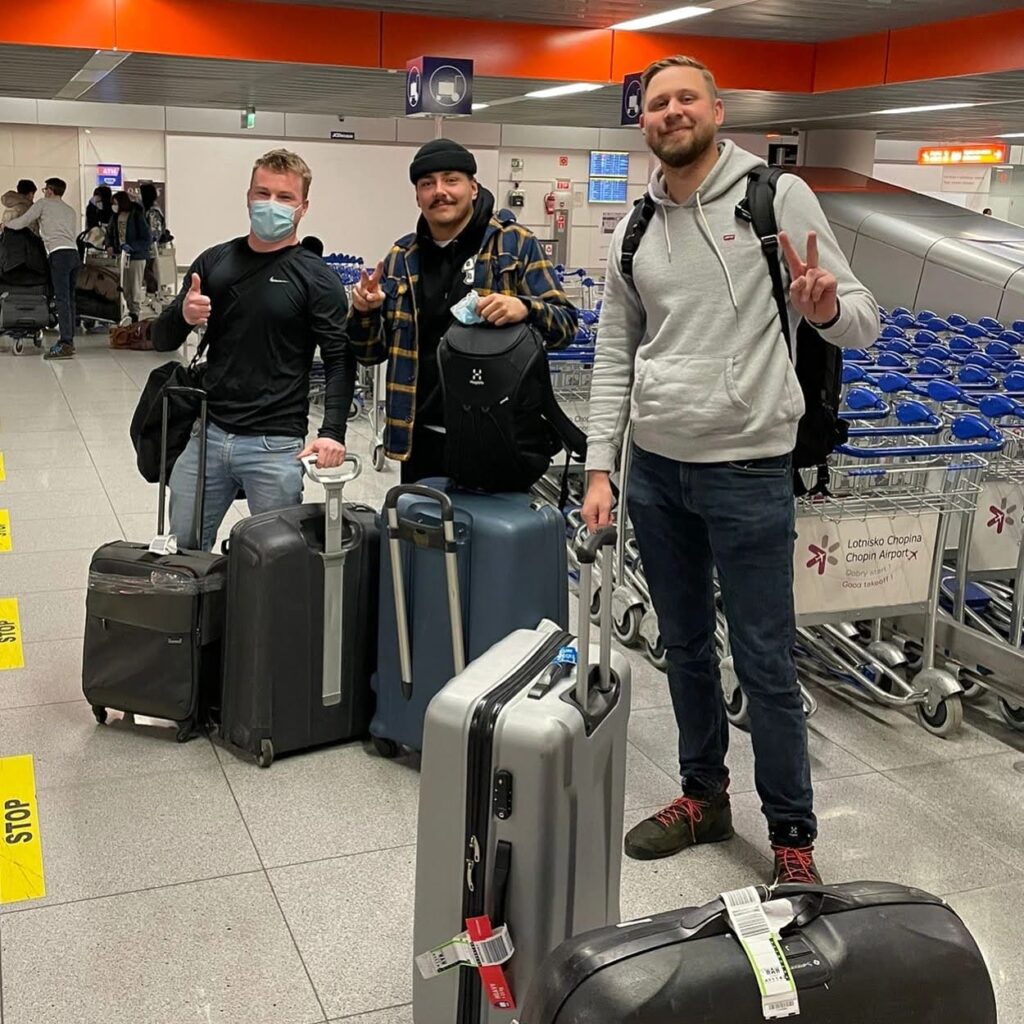 What’s Next For The DOJO Helsinki BJJ Community?

Any other upcoming projects of a similar nature? If so, what are ways in which people can help?

The BJJ community from Helsinki si not done supporting the troops in need on the ground in Ukraine. While this project might have happened quickly and in a somewhat impromptu fashion, they are far from done.

Two days after completing the purchase and delivery of the drones, they already have 20 generators ready to go to Poland. Once again, the company providing the generators only decided to charge the absolute minimum price, helping the Ukrainian cause in their own way.

While Andres did put up the money to purchase the drones himself, “he managed to get more than what he contributed back in about 15 minutes while on the plane“, thanks to support from the community. This money goes towards the next project, and anyone interested can pitch in. Just follow the link below!