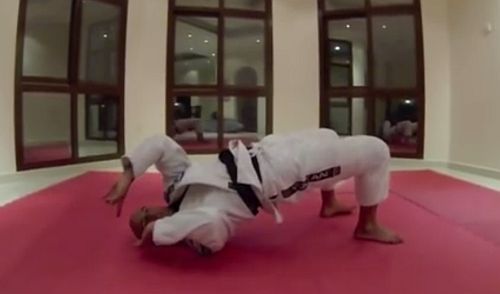 Okay guys, let’s do some bridges. This is something you hear at every BJJ class around the world, with no exceptions. It may be as part of the warm-up, as a part of a drill, the technique being shown or even shouted in rolling. In fact, you could argue that yelling bridge or “Upa” at any time will help someone achieve something positive. Jokes aside, the BJJ bridge is a more than just a fundamental move when it comes to grappling. However, it is astonishing how many people take it for granted and do bridges wrong. It is about time we clear up the BJJ bridge in terms of its aim, execution and some outside-the-box thinking.

It is not just Brazilian Jiu-Jitsu that relies heavily on bridging. Every grappling martial art out there, and of course, by extension MMA, centers their defensive game around the bridge to some extent. The movement is a wrestling staple, it can save your neck in BJJ, it can help you counter in Sambo, etc. However, in every grappling art, the bridge is done slightly differently, as a result of rules and the goals of the sport. That means that while the wrestling bridge can help you in Jiu-Jitsu, the subtle nuances of the BJJ bridge make it a far better option.

Contents hide
The Wrestling Bridge
Deconstructing The BJJ Bridge
What About The Hip Escape?
Closing Arguments

Let’s start with the original bridge, at least when it comes to grappling. After all, wrestling is arguably the oldest form of grappling. Let’s start with the goal of the bridge in wrestling. The best way to win a wrestling match is to throw someone down and pin them. Of course, surviving means you have to avoid the match-ending pin, which translates to both your shoulder blade being pinned to the mats. The wrestling bridge is the answer here, which is precisely why wrestlers bridge using their head and neck.

Neck bridging is highly effective in this context. Going for a BJJ bridge in this situation would only mean you’re helping your opponent pin you. Going on the top of the head, though, better known as neck bridging, will provide you with a post that keeps your shoulders of the ground. It does take specific training and conditioning, but the neck bridge can make all the difference. In a wrestling match. In Jiu-Jitsu, it may just get you into more trouble than it is worth.

When doing a wrestling neck bridge, the key thing to remember is safety. If you haven’t done hundreds of reps of it without a partner, do not try and do it in a roll. The wresting bridge hs its uses in BJJ in a sporadic fashion. It can provide a pivot point for transitioning between positions, but still, it is not something I’d encourage you to do on a regular basis. For this bridge, wresters use their legs to arch their bodies upwards, with only the top of the head and toes touching the ground. Often times helping with their arms they can keep the shoulder blades of the mats even if the hips turn to a side or come close to the ground. It is the perfect “hack” at least when it comes to wrestling rules.

When it comes to the BJJ bridge, we do things differently to wrestlers. In most cases, the BJJ bridge is used to escape the mount position, so I’ll use this position to explain the movement. However, the bridge will help you out of, or into lots of Jiu-Jitsu positions. The goal of the BJJ bridge is to get you out of a bottom position, like the mount, where you have an opponent attacking your while they’re on top of you. This means you don’t’ really have time to spend and your bridging needs to be inch-perfect if want to really escape from everyone’s pressure.

One thing people usually get wrong in BJJ is the power source for their bridge. Funny enough, nobody told me this and I discovered it while doing Yoga, out of all things. Next time you do a bridge, simply do it by taking your hips up, BJJ-style. What did you use as a power source? Most likely your hips, maybe your glutes. Now do it again, but focus on using your hamstrings as your main power source. The difference in power output is unbelievable. 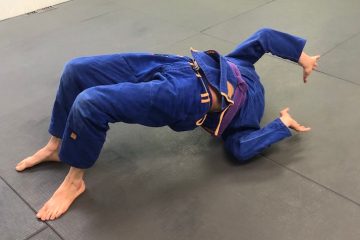 The second piece of the BJJ bridge puzzle is direction. Going straight up with your hips has no point in Jiu-Jitsu. That is why we usually take our bridges over our shoulders to the side. Direction has everything to do with escaping, particularly from the mount. I’ll share a breakthrough concept on escaping mount in the future. For now, just know that you need to move your head out of the way, and go slightly to your side every time you bridge. And this is important not just when doing mount escapes, but every time you do a BJJ bridge.

A final point to remember during execution is connection. I’ll make it simple – unless your pelvis isn’t connected to the opponent’s pelvis in the mount, don’t even try to ridge. Take all the slack out before you activate your hamstrings and hit the correct direction. That’s when a bridge will work for you every time.

What About The Hip Escape?

What about it? Well, let’s think long and hard (or just short and superficial) about the role of the hip escape in Jiu-Jitsu. Is it more important, just as important, or less important than the BJJ bridge? I’ll answer that in a moment. However, if you come to think about it, escaping your hips is the one thing every defensive BJJ movement has in common. From there on, if you take a look at the BJJ bridge,  you’ll notice that the end goal is the same – escape your hip from underneath your opponent. In fact, you might argue that the bridge is nothing more than a hip escape done with your hips higher off the ground.

Think about the bridge as a hip escape. It is out there, it breaks the usual ways of thinking about the bridge, I know. But that is exactly what makes it so powerful and effective. The fact that we use a direction to “push” our bridge into, means that our hips get to move back in the opposite direction. In other words, the next time you do a BJJ bridge, don’t push past your most powerful point. Instead, the moment you reach the peak of the bridge, pull your butt (i.e. your hips) a bit back. The results of this “elevated hip escape” will leave you speechless.

In short, everything in BJJ is about the hips. Even a bridge. Next time you need to bridge, think about being close to your opponent, using your hamstrings for power, and going in the right direction. Throw in the concept of escaping your hips away when you’re at the peak of the motion and you have a foolproof way of bridging. Now transfer all this knowledge to any other position that requires you to bridge.

The BJJ bridge is simple. However, it is not as simple as lifting your hips off the mats and trying to rotate your body.that’s just a simple way of giving away submission or your back, at least when in mount. On the other hand, understanding why you do the bridge, and how to do it will yield much better results. Throw in a nonconventional way of thinking in there and you’re’ all set to bridge yourself out of anything.