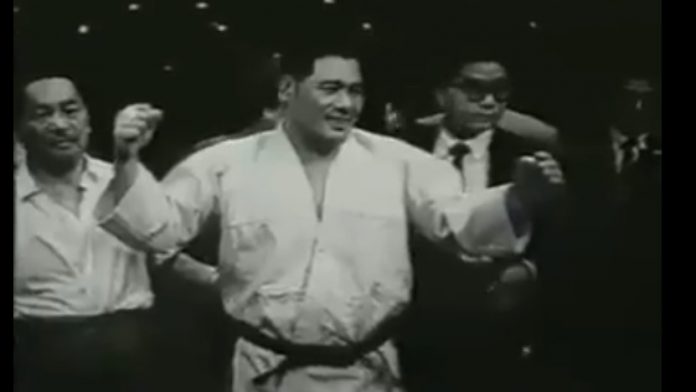 On October 23, 1951, Hélio Gracie faced Masahiko Kimura who outweighed him by nearly 80 lbs. It was the first time that a jiu-jitsu world championship match would be held outside of Japan.

In a video below Rener talks us through his grandfather’s famous match with Kimura.

Kimura said! Listen Helio, You’re good but not good enough to fight me! Instead, I’m gonna have you fight number 2 Japanese Jiu-Jitsu Fighter a guy named Kato and Kato will beat you just as easy as I would!

Grand Master Helio Gracie fought Kato and after 6 minutes choked Kato out.
So when Kato went unconscious the Japanese Champ had no choice but to accept a challenge from Helio.

After the fight, Kimura went to Gracie Academy and invited Helio to teach Jiu-Jitsu in the imperial academy in Japan, but after a consideration, Helio Declined it.” 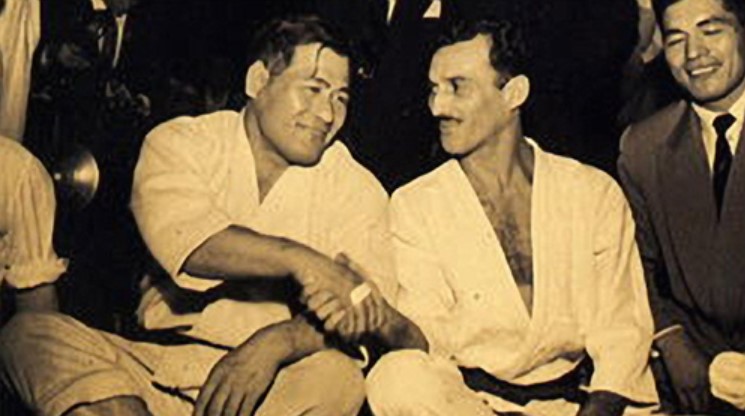 Masahiko Kimura was a Japanese judoka and professional wrestler who is widely considered one of the greatest judokas of all time. In Japan, he is known for the controversial match he had with Rikidōzan.

Here is Kimura’s review of the “Kimura vs Helio” event and the stuff we didn’t know or we knew little about.

“20,000 people came to see the bout including President of Brazil. Helio was 180cm [5’11”] and 80 kg [176#]. When I entered the stadium, I found a coffin. I asked what it was. I was told, “This is for Kimura. Helio brought this in.” It was so funny that I almost burst into laughter. As I approached the ring, raw eggs were thrown at me. The gong rang. Helio grabbed me by both lapels and attacked me with O-soto-gari and Kouchi-Gari. But they did not move me at all. Now it’s my turn. I blew him away up in the air by O-Uchi-gari, Harai-Goshi, Uchimata, Ippon-seoi. At about 10 minute mark, I threw him by O-soto-gari. I intended to cause a concussion. But since the mat was so soft that it did not have much impact on him. While continuing to throw him, I was thinking of a finishing method. I threw him by O-Soto-gari again. As soon as Helio fell, I pinned him by Kuzure-kami-Shiho-gatame. I held still for 2 or 3 minutes and then tried to smother him by belly. Helio shook his head trying to breathe. He could not take it any longer and tried to push up my body extending his left arm. That moment, I grabbed his left wrist with my right hand and twisted up his arm. I applied Udegarami. I thought he would surrender immediately. But Helio would not tap the mat. I had no choice but keep on twisting the arm. The stadium became quiet. The bone of his arm was coming close to the breaking point. Finally, the sound of bone breaking echoed throughout the stadium. Helio still did not surrender. His left arm was already powerless. Under this rule, I had no choice but twist the arm again. There was plenty of time left. I twisted the left arm again. Another bone was broken. Helio still did not tap. When I tried to twist the arm once more, a white towel was thrown in. I won by TKO. My hand was raised high. Japanese Brazilians rushed into the ring and tossed me up in the air. On the other hand, Helio let his left arm hang and looked very sad withstanding the pain.”