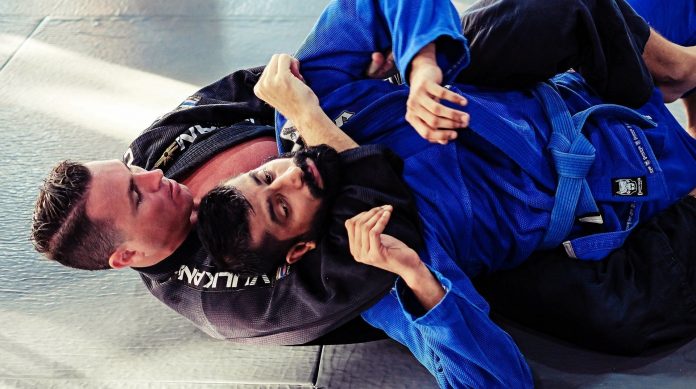 Contents hide
The ultimate attacking position in BJJ is back control. However, most people are so focused on just one attack from the back that they very often fail with it. The reason is that it is easy to defend against a single attack when you know what’s coming. with our back attacks system, you’ll keep your opponents in the dark while you’re hunting for submissions.
Back Attacks System
Choking
More Choking
Arm Locks From The Back

The ultimate attacking position in BJJ is back control. However, most people are so focused on just one attack from the back that they very often fail with it. The reason is that it is easy to defend against a single attack when you know what’s coming. with our back attacks system, you’ll keep your opponents in the dark while you’re hunting for submissions.

Attacking an opponent while having complete control over them and being absolutely safe at the same time. This is the essence of Brazilian Jiu-Jitsu. However, not many positions within the art allow for all of these conditions to be fulfilled. The back mount though, or back control is one that ticks all the boxes. In fact, it is such a powerful position that virtually anyone prefers to attack from it. In terms of back attacks, there are plenty of various opportunities available. For some reason though, people seem dead set on going for a choke from there. Even then, people seem to favor either a lapel choke or a rear naked choke, but rarely like to combine techniques. For me, this is truly baffling, as the position offers so many attacking options that you can connect together.

Back attacks do not need to be one-dimensional and direct. In fact, they mustn’t be, if your goal is to submit high-level opponents. In fact, chaining together back attacks is one of the first submission chains you should look to develop! To that extent, we bring you the best attacking options as well as how to think about integrating them into a system. Remember that a system means that you do not only go forward with attacks. You also have the opportunity to circle back to any of the previous back attacks, thus keeping your opponent guessing all the time.

Regardless if our training goals are geared toward Brazilian Jiu-Jitsu competition, an MMA fight, or just rolling, you need to really master the back position. That said, the position is one of control and points, but it is also perfect for submissions. WHi8le you might get away with back takes and control only in BJJ matches, for MMA you need something else. Submission victories are teh cherry on the cake anyhow, so why not make sure you have as many back attacks as you can?

The back position is not a complicated one to get into or hold onto. Essentially, you want to turn into a tight backpack on your opponent. To do so you need hip connection (hooks) and torso connection (seatbelt). Once you have the control, you can hold on for a while. That way you’re letting your opponent know who’s in the driving seat. Also, you can gauge their reactions so you know which of our back attacks to use first. From there on, controlling without attacking is meaningless – it just allows you, opponent, to focus on escaping instead of defending.

So what can you think about once you’re in back mount? Self-defense, or MMA-wise, you can think about striking. However, putting the opponent to sleep is teh number one option. Unfortunately, a fellow grappler knows what’s coming and you’ll likely run into strong defense. What happens in BJJ, though, is that defending just open up different avenues of back attacks. Even more so, simultaneous attacks are going to leave every opponent confused, while allowing you to choose the finish.

Let’s explore all the possible avenues of submitting someone from the back. After all, there are som any more opportunities than just a collar or rear naked choke.

OF course, going for the rear naked choke from the back is the quintessential BJJ move. You sneak an arm through under the neck and look for that figure four. Once you’re in you can put the opponent to sleep at your choosing. In most instances, though, you’ll get a tap before a nap.

Another awesome option to go for area collar chokes. Whenever you’re training in the Gi, once in back control you have a powerful weapon at your disposal. the GI collar removes the need for threading an arm in, as it is already on the opponent’s neck. All you need to do is choose one of the many choke variations and finish at will. The bow and arrow is the preferred choice here, although there are a few more variations that might come in handy.

The problem with this back attacks is that people rarely think about linking them together. Provided you have a good grip fighting strategy it is always advisable to go for the RNC. The idea is that even if you can’t get deep enough, you’re still going to be able to grab a collar. the thing is that while you were digging for the RNC you’ve already reached more than enough depth for a very tight collar choke. Of course, you can always abandon the collar choke in favor of an RNC as well. You could even try to hit an RNC on the opposite side of a collar choke attempt.

This is where things start to get interesting. Why just focus on choking someone with your arms, when you can also use your legs. By the way, the legs are way more powerful than the arms, so you’ll be able to submit even opponents much stronger than you.

Whenever you are controlling your opponent’s back, you can think about triangle chokes in addition to your basic chokes. Setting it up is easy, especially when an opponent is trying to escape. The basic escape is for the opponent to bridge up until their head touches the mat. This is going to allow you to place both your feet on one side of their hip. For the triangle to work, this has to be the side of the seatbelt control that is over the neck. Once that’s done, simply raise your foot on that side toward the opponent chest, and grab it with your opposite arm. Lock on the triangle and you’re all set.

Doing this attack off an RNC or collar choke is your best bet. The advantage is that you can either get a triangle or an armlock variation from the position. On top of that, transitioning back to fullback control is also very easy. These are the back and forth back attacks we referred to earlier.

Arm Locks From The Back

Let’s say you’re having a really difficult time getting a choke. Whenever your opponent defends choke attempts from the back, they open up their elbows. Battling for grips flares their elbows outwards, providing you with a different avenue of attacks. Although you could go for both arms, the easiest one to get is the arm on the underhook side of the seatbelt. Simply switch the other arm from one shoulder over the other and lock in a Kimura grip. The bottom arm is already in place from the seatbelt control.

Now, finishing with a kimura from here is highly unlikely. Going for an armbar, however, is a tried and tested tactic. From the Kimura grip position you have, all it takes is to swing one leg over the opponent’s head and you’re in an armbar position. What’s even better is that you can, again, return to fullback control from the armbar position if you need to.

Finally, think about connecting everything. Go for an RNC, then a collar choke. If it al fails, get to the triangle from the back. If things don’t work out, go for the armbar. Or better yet, return to back control and go for a Kimura grip and then an armbar. The back attacks combinations are really endless.

If you’re feeling particularly in the mood for submission though, you could always go for a twister or the truck position off back control. These are unorthodox attacks that are effective nonetheless. the thing is, the Twister is illegal and the calf slicer from the truck is only legal past brown belt. You could still train them, though.