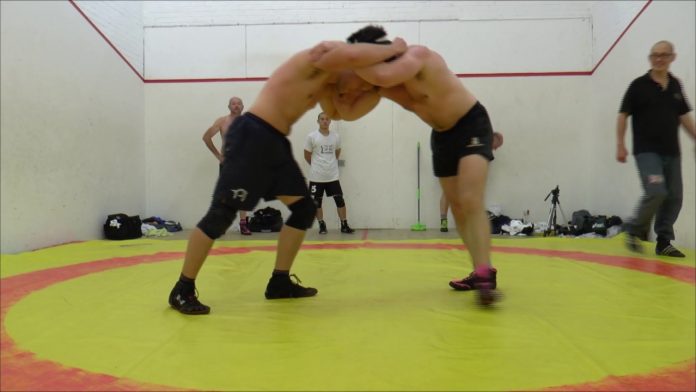 Modern Jiu Jitsu is an art made up of many modalities. The competition scene nowadays is as diverse as is the origin of Brazilian Jiu Jitsu. From traditional Gi competitions, through submission wrestling style tournaments like the ADCC, to the sub-only No-Gi events, the scene has grown immensely. Many of these styles represent the root arts of Jiu Jitsu in their own unique way.

With all these options available all around, people have the choice to specialist in a certain area of competition. Not long ago the options were much more scarce. Up until a decade or so ago, the IBJJF tournaments were the only Gi outlet for aspiring competitors. The No-Gi enthusiast had it even tougher, with the only submission grappling tournament ADCC taking place every couple of years.

Both the origins and the competition scene of Gi Jiu Jitsu have been covered high and wide. So, today we’re going to focus on the submission wrestling part of BJJ.

A closer look at Submission Wrestling

Submission wrestling (or submission grappling) is the art of grappling that focuses on clinch and ground fighting, while looking to finish by way of a submission hold. One main characteristic of this style is the lack of traditional clothing, or Gi. Originally, submission grappling was done with just shorts on, similar to today’s MMA fights. At the present time, fighting apparel generally includes a rashguard and/or spats.

Rooted in the art of wrestling, submission grappling includes clinch fighting, throws and takedowns, pins and submission holds. Brazilian Jiu Jitsu has played a big role in the development of the ground and finishing aspects of submission wrestling, while wrestling’s input is in the area of clinching, takedowns and pins.

Historically, submission wrestling traces back to both Japan and Greece. The ancient Olympic discipline of Pankration was the first combat sport to utilize the use of choke holds and joint locks in competitive means. On the other side of the world, the Japanese samurai relied heavily on submissions for victory on the battlefield. Their grappling style later gave birth to Judo as we know it today, which later influenced the formation of today’s BJJ.  Most countries in the world have their own form of submission wrestling. It is known as Sambo in Russia, wrestling in the USA, Malla-yuddha in India, Pankration in Greece, etc. 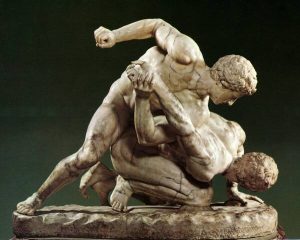 The styles of submission grappling

The sport of submission wrestling brings together various other styles of wrestling based arts. Folk wrestling, Greco-Roman wrestling, BJJ and Sambo are just a few of the regular contributors. Submission grappling is also the precursor for the development of some styles of grappling often utilized in modern times.

No-Gi BJJ is growing into the favorite way to compete for many new athletes involved in grappling. It represents the core spirit of what submission wrestling is all about. All the successful No-Gi tournaments, especially the submission-only ones, owe their success to submission grappling. Notables like the Danaher Death Squad  members have certainly done it justice in recent times, embodying the principles of submission wrestling. While always going for a submission, they demonstrate great clinch work, incredible takedown game and immense pressure from dominating positions (pins).

Catch wrestling, on the other hand, is a style which emerged in Britain in the 1800’s. It represented a mix of local wrestling styles and gained popularity mainly through the performances of catch wrestlers art carnivals. It has led to the formation of other styles in its own, most notably Shooto and Combat Submission Wrestling. The older standouts of the style are Frank Gotch and Ed Lewis, followed by the unique and formidable Josh Barnett.

The Brazilian representative of submission wrestling is the Luta Livre. An interesting mix of Judo and Catch Wrestling. It is a very aggressive and fiery style, befitting the culture it originates from. Luta livre means “freestyle fighting” and focuses heavily on submission holds. Founded by Euclydes Hatem, Luta Livre berd formidable fighters the likes of Marco Ruas and Renato Sobral. Most noteworthy, Luta Livre was the fiercest rival of Brazilian Jiu Jitsu in Brazil.

There are certain aspect of submission grappling that make it different from traditional BJJ. While these have become less and less apparent as BJJ evolves, but are worth a mention none the less. Leglocks and front headlocks attacks have always been a staple of submission wrestling opposed to BJJ’s preference of triangle and back chokes and armlocks. In addition, the lack of Gi allows for more scramble like situations and a bigger chance of escaping submissions. The submission holds arsenal is also considerably larger, due to the fact that all kinds of submission holds are allowed without restrictions.  Furthermore, the ruleset of submission wrestling focuses a lot more on rewarding fishes and actual dominant positions, as opposed to advantages.