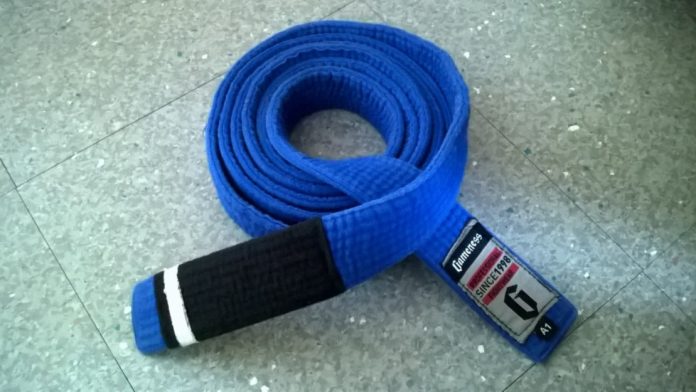 I’m not ready for my blue belt promotion is something that BJJ practitioners often thinks. There are many reasons why they think so but, few of the most common are: I can’t tap blue belts or some white belts dominates me. Well, it’s not about the roll. It’s not about who taps who. There is much more involved in it.

Your instructor just promotes you in front of everyone into a blue belt but you have a feeling you don’t deserve it. Well in 99.9% that’s not the case. You deserve it if your instructor thinks so.

At the end of a day you should trust your instructors judgement and assessment of your skills. While there are many reasons why you’re promoted that you obviously don’t see or you don’t understand, you shouldn’t question your instructor.

Saulo Riberio wrote an article on this subject.

“If you worry about the time and speed of your promotions, you lose yourself. Remember, before you are a blue, purple, or brown belt, you want to feel like one. You must feel that your skills are there. You cannot fool yourself. Attaining a belt is just proof that your teacher is connected with you. You will know when you deserve it. My role as a instructor is to be there and say “Its time.” But you should already realize this on your own.”

“Jiu Jitsu Is not math, and promotion is not based on attendance or calendar dates. A regimented promotion schedule based on dates or attendance is the worst way to gauge development. Jiu Jitsu is more complex than this.”

“There is no sense in chasing a belt and getting it as fast as possible. Often, people do not see that black belt will be their longest belt. Remember, it doesn’t matter if you get it in four years or fifteen. Either way, you will have the rest of your life with a black belt around your waist. Building the belt is what matters.“

In this video below Prof. Jeremy Arel talks about feelings of inadequacy about belt rank.

“This is a common occurrence in our sport and one that is often discounted by instructors upon promotion but with little explanation of why it’s not an issue.”

“There was another 8 minutes before this portion of the video but I edited it down to what I believe was the most important content. Previous to this clip, I talk about my trip to Brazil being a powerful experience because it gave me perspective and a frame of reference, specifically with the black belt rank.”

“As I continue to grow technically ,my understanding of the rank structure changes regularly as well. This is my current thinkings and concepts about promotion as a whole.”

Shortcuts and Directions for the Fastest Progress in Jiu Jitsu