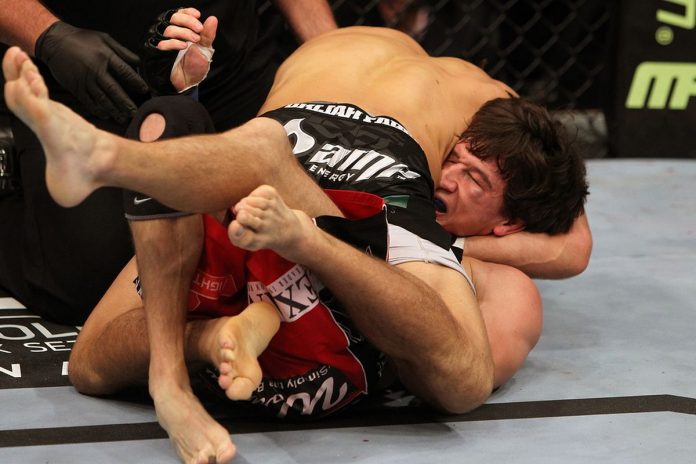 Guillotine chokes are not just another submission in Brazilian Jiu-Jitsu. Across all grappling martial arts, guillotine chokes have a role to play. Very often, they’re among the highest percentage submissions people have at their disposal. In modern days, the guillotine is having somewhat of a revival. Not that guillotine chokes ere ever gone, but nowadays, they seem to be everywhere. This, inevitably, leads to experimentation and the creation of different new variations. The one defining factor of a guillotine’s effectiveness is in one tiny crucial detail – the grips.

The reason people going for guillotine chokes is their versatility. Unlike many other BJJ submissions, guillotine chokes literally work from everywhere. Successful guillotine setups are available from the guard, from the mount, from both top and bottom half guard, from standing. The list goes on and on. Even better, guillotine mechanics are fairly simple, with just a few key details to focus on.

AS far as variations of the choke itself go, people usually recognize a couple of main ones. Those are the arm-in guillotine and the classic guillotine. these two are the base from which all other guillotine chokes stem, regardless of positioning. Both these variations, though, require different grips to truly work at a high level.

Without getting into the specifics of guillotine chokes we’ll only go over some key finishing details. the first is the position you’re doing a guillotine from. Usually, it is the guard, but it can also be any of several top positions. Wherever you are, you need to remember that your hips need to be over the opponent’s hips.

The next key thing is head position. The head of your opponent has to remain bent forward at all times. This holds for any position. Usually, it is your armpit or your chest that helps you put pressure on the back of the head. What prevents the opponent from extracting their head is the almighty chin strap This is when you cradle their chin in the palm of one hand.

Also very important, you need to have control over the posture. From top positions, this is not hard, as the floor is a great aid. From bottom positions, though, you’ll need to have a leg over the opponent’s back. When you do this, make sure you keep it as high towards their head as possible. Remember to also have your toes pointing forward, like a ballerina’s foot.

The final tip is to avoid going for a squeeze and a pull when finishing guillotine chokes. The key is to compress the space where their head is, not extend it.  In order to achieve this, you need to look to touch the elbow of the arm that you have around their neck to your knee on the same side.

All that covered, it’s time to focus more attention on how you grip your hands. The first thing we need to clear up is that all the high percentage grips do not require any particular athletic capabilities. No need for crazy flexibility or insane amounts of strength. what you actually achieve with the grips are different angles and very precise pressure. Plus, you make sure the opponent can’t escape your grasp.

There’s something beautiful about grips that work just as well in both Gi and No-Gi Jiu-Jitsu. Guillotine chokes work is more often associated with No-Gi, but they can work with the Gi as well. It is all in the grips. The only thing you need to know is when to use grips that work better in an Arm In Guillotine, opposed to a regular one. As you’ll see later on, this is not hard at all.

The BJJ guru of modern times, John Danaher has everything you need to know about guillotines. All his information is neatly packed into about 10 hours of incredible instructions. All of these guillotine chokes and grip variations and many more are in the “Enter The System: Front Headlocks” DVD instructional by the one and only John Danaher.

The ball and socket grip is the most basic guillotine chokes grip. It is the one people used to use for both the arm-in and regular guillotine. While it still is a good option for both, there have been certain changes that make it way more effective now.

For the ball in socket grip, we’ll use an arm-in guillotine example, from the guard. As with all guillotine chokes, one arm needs to go over the had and under the neck of an opponent. For the ball-in-socket grip, this means having your forearm under the neck. The arm needs to go as far towards the other side as possible and the palm should be in a fist. The other arm needs to cover the back of the fisted palm, fingers pointing downwards. Your fingers should grip the bottom of that palm.

Finishing guillotine chokes with this grip requires you to keep the choking arm high on your chest at all times. Apart from that, finishing mechanics are the same. You need the leg over, an arm in, and you need to crunch to the side before you add squeezing.

The pretzel grip is one of those innovations that completely change a submission. Namely, it is a “hack” for the arm-in guillotine that is simply impossible to escape from. As far as drawbacks go, there’s only one – you can’t use it with a regular guillotine.

For the pretzel grip, you need the classic arm-in guillotine position. From there, you’ll need to keep an open palm on the choking hand in this instance. The other arm, that goes around the opponent’s arm, is going to grip a palm to palm grip with the choking arm. This is where the “pretzel” comes into play. Instead of gripping with your thumbs near each other, you need to grip with the fingers of the non-choking arm pointing downwards. This places the thumbs on two opposite sides of the grip.

While this grip might seem uncomfortable and strange at the beginning it is a great one for guillotine chokes. It allows you to keep the choke ultra-tight. It also allows you to squeeze with your back instead of your arms, making it a much more powerful submission. All basic finishing mechanics still apply.

The 10 finger grip is not really a tight grip when you first think about it. However, if you place your arm precisely, it is a perfect grip for finishing a no-arm guillotine. Just like with the “pretzel” grip, the only drawback is it only works with one variation. This time though, it is the classic guillotine variation.

For the 10 finger guillotine, the only adjustment you need is sneaking the chin strap a bit deeper. The goal is to have the knuckles of your choking hand peek from the other side. This places the root of your thumb straight into the opponent’s necks. causing a very painful choke. Your other hand is simply going to go over the choking hand, finger in the opposite direction. The final finishing trick is to rotate your choking arm thumb towards yourself so that you dig the choke in.

the high elbow guillotine is arguably the most famous of all guillotine chokes, at least at present. The trouble with it is, only a handful of people can actually do it right. And it is all down to how you grip your hands.

The high elbow guillotine grip is actually a modification of the ball-in-socket grip. It works best with the classic guillotine but can work with an arm-in as well. the goal is to place a ball-in-socket grip but keep the palm of the choking arm open. You’ll need to use your non-choking arm to pull the choking arm as deep as humanly possible. The main goal is to place the back of the non-choking hand on the opponent’s shoulder. This will result in your elbow pointing high towards the ceiling.

having the elbow in such a position might be easy for yogis, but normal people will struggle. To avoid flexibility as a requirement, remember to place your head towards the opposite side shoulder. This will get your arm straight into position. It is so powerful that you’ll rarely even need to squeeze.