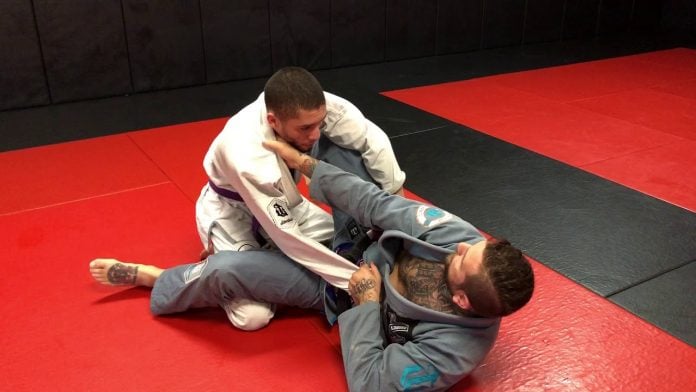 The very first thing I was ever shown in Brazilian Jiu-Jitsu was the scissor sweep. Of course, that was after I spent several minutes into a blue belt’s guard, trying to figure out what’s going on. When I ended up on the ground, it was one of those moments that make you wonder whether anything you’ve ever known is really true. The BJJ scissor sweep can have that effect. It is usually among the first sweeps anyone learns, and it does tend to work at all levels, but only if you have access to all the details. Moreover, it can be a nightmare to defend, which is where sneaky counters come in to play.

The point of a sweep in Jiu-Jitsu is really simple – get on top. It is the one most reliable thing you can do from the bottom, given how difficult it is to pull off a submission form bottom against a skilled opponent. The BJJ scissor sweep usually gets forgotten for a few years by most, somewhere between blue and brown belt level. When it resurfaces, though, people realize it is a great tool to have in your arsenal, particularly for the modern Jiu-Jitsu game. So, why not stick with it all throughout your BJJ journey and make it one of your most dangerous weapons?

The First Sweep You Learn

The BJJ scissor sweep is easy to understand for people (at least they think it is when they first see it) and it gets the job done quickly. There’s no moving the opponent, or using pendulums to try and gain momentum to end up on top.  With the BJJ scissor sweep, it is all about mechanics, pressure, and hip movement.

The reason people use this sweep is that it works, especially at lower belt levels. Considering that most people show two variations off the bat (sweeping or pushing with your bottom leg), people get two sweeps for the price of one, sort to speak. The problem is that hat sweep is so popular, that the moment you start moving your hips people easily recognize it. When they do, one of two things will happen, and they determine the success you’ll have. Those directions are either improving posture and blocking your sweep early on or failing to react all together.

The good thing about these reactions is that they’re predictable. This is exactly what makes the scissor sweep work at the highest levels of the sport. When you do the sweep correctly, you only leave a couple of options for your opponent. The thing is, one of these options doesn’t’ work well for you – when they posture up and dig in. This is when you need to have a few sneaky variations up your sleeve to make sure you get the outcome you want, regardless of the reaction. That is how black belts make it work and seem easy.

How do you execute a BJJ scissor sweep? For the most basic version, you need a grip on the collar (cross grip) and a grip on the same side sleeve to begin with. The starting position is the closed guard, although you can attack with the sweep from open guards or even half guard in certain circumstances. Next up, you have to open the guard in order to turn your hips sideways, so that you’re facing the side you have the grips on. From there, you sneak a knee shield in, and place the bottom leg on the mats, right next to the opponent’s leg. Push on the opponent’s belly a bit and use your grips to pull them forward. The moment their head comes near yours, a scissoring motion with your legs is all it takes.

This moment of pulling the opponent forward is where the battle of the BJ scissor sweep takes place. If the opponent can dig in and shift all their weight back with a rigid posture, you can’t pull them. That means no sweep. Unless you know a variation.

The moment you feel an opponent digging in, it means they become much less mobile. This provides you with options for finishing the scissor sweep. A great and unexpected variation is to use the knee shield to rally push into their belly while crunching up. The grips and opponent’s base and posture will make scrunching upwards easy for you. The goal is to make a technical stand-up while keeping the knee on the belly at all times. This is the most crucial part of this BJJ scissor sweep variation – keeping pressure with the knee.

The position seems complicated but it works and is easy to get to. You can actually sweep in different directions from there, but the easiest route is grabbing the far side knee and pushing the opponent to their side so that they roll over their shin. There’s no way to prevent it since their posture is what gets them in trouble. If they collapse it, you actually get the back, which is much worse for them.

The Heel Hook That Beats The Scissor Sweep

What do you do if you’re on the receiving end of the BJJ Scissor sweep? Well, first of all, you need to understand what the real threat of a sweep is. It is not when your butt or back touch the mats. It is also not when an opponent stands up. What counts is when they achieve both of these that the sweep works. In other words, don’t fear going down on your back, or an opponent standing up. Usually, they can rarely achieve both.

That means that if you “let them” push you to the ground, you have a moment in time where you can act before they get up to actually finish the sweep. This is where leg locks come into play. From the get-go, you have a perfect finishing opportunity because of the placement of the knee shield leg across your chest/belly. This exposes a heel immediately, and all you need to do is get your hips to the ground. That’s where your opponent will help you with their sweep attempt.

The first key thing to remember is not letting them stand up, or they complete a sweep. So, focus on going into an Ashi Garami to control their hips. You can simply throw a leg over, or sneak one in and then throw a leg over their knee shield leg. Whatever the case, their heel should be on the top side of your body. I’d suggest finishing with an outside heel hook, but a toe hold is also an option/. As is going deep[er into the Ashi Garami game, towards the Game Over AKA Sambo Knot position.

The BJJ Scissor sweep is a very useful thing to have in your arsenal. It also has plenty of variations to allow you to switch things up and be unpredictable. But that only works up to a point. As the person sweeping, you need to have momentum, timing, and cunningness your side. Otherwise, you might just find yourself deep into a heel hook that you can’t escape.