Being a beginner sucks!!! No matter which aspect of life it is, starting something new gets people out of their comfort zones. When it comes down to martial arts, BJJ tends to be on top of the pile regarding difficult new beginnings. In fact, Jiu Jitsu can be tough on experienced practitioners on a regular basis, let alone new students. The white belt period in BJJ is considered to be nothing short of sadistic. Well, that is the point of view of new white belts, in general. However, one can see why they might feel that way.

The first couple of months are the biggest hurdle of anyone’s Jiu Jitsu journey. The feeling of a new white belt is that of jumping into a pool of sharks and alligators. They might not feel like that while signing up, but after the first couple of classes, it’s all they can think about. Let’s be honest, those first couple of months are not a pleasant experience unless you’re a bit masochistic. However, this period is crucial for anyone seriously thinking about training BJJ. Only after surviving this “initiation period” can one be considered as a Jiu Jitsu student. You can also check 25 main reasons why you don’t progress as much as you could HERE.

First and foremost, the early days of a white belt are about survival. By survival, I don’t mean the surviving class, because most won’t. A white belt should focus on mental survival, i.e. that of their ego. As we know full well, BJJ successfully deflates egos, but this process takes time. Not being able to squash the ego is one of the main reasons some people give up very early. A realistic goal for a white belt in their first months of training is to find a way to survive mentally. In a physical sense, a good goal in the survival category is not getting injured. 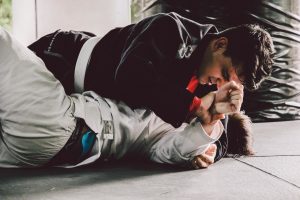 As a white belt survives the early onslaught and settles in its time for their goals to shift a little bit. Survival is still going to be in the focus, but not as hard. Once a white belt manages to get through a roll with a blue or purple belt without tapping, they often start to think ahead. It is not unusual for a white belt to focus on getting promoted to blue. After all, it is the most desired promotion in BJJ. This, however, is not the correct way to set goals. Thinking about the next belt is never a good idea, but that holds especially true at white belt. A beginner should focus on learning the fundamental technical aspects of the art. They won’t get promoted without them, so they might as well choose the right goal. The method is fairly easy – just keep showing up.

Finally, after a certain amount of time spent at white belt, a student might want to compete. A very important goal for a white belt is to learn the rules of competition. Knowing the rules allows a student to focus on the correct technical areas.

As previously mentioned, the mindset of a white belt plays a huge role in their development. Nobody expects white belts, especially new ones, to feel comfortable and relaxed. Actually, regardless of experience, it is quite rare for a white belt to be relaxed during rolling. A very helpful way of thinking about BJJ for beginners is to focus less on panic movements and more on getting comfortable. Obviously, it’s never comfortable when a brown belt is in full mount. It can, nonetheless, become less uncomfortable if you’re not struggling spastically. So, white belts should look to get comfortable in bad positions. Just make sure you keep breathing and you’ll be able to think more clearly.

This leads us to the next important mental aspect for a white belt – acceptance. No matter which belt, a BJJ [practitioner is going to get tapped. Beginners might as well accept that they’re going to tap repeatedly and more than any other belt. Apart from the long-standing joke that white belts are food for the blue belts, they’re going to tap to more experienced white belts as well. Accept that this is a big part of learning Jiu-Jitsu and tap early and often.

A Word On Technique

BJJ is overwhelmingly rich with techniques and moves. Nobody expects a white belt to know them all, but instructors do expect students to look for them while rolling. A white belt attempting berimbolos or jumping guard passes never ends well. Instead of all the YouTube craziness, white belts should keep it simple. Listen to the instructor, learn the fundamental techniques and attempt to apply them in sparring. Leave the fancy stuff for later and focus on how you move your body. In a technical sense, it’s not as much about moves, as it is about movement patterns. A white belt should be a master of bridging, hip escaping and the technical stand-up, to name a few.

Having a good grasp on the basic movements is going to do wonders for white belts in rolling. Since white belts mostly look to survive, if they utilize the advice from this article, they’re going to do so much more effectively. Let’s look at a white belt who is comfortable being a beginner, who keeps a cool mind in bad positions and who attempts to get out via technical movements. That white belt is on the correct path for advancement in BJJ and won’t go unnoticed by the instructors.

Stop Thinking About Techniques As A BJJ White Belt

Black Belt Chokes Out White and leaves him Unconscious