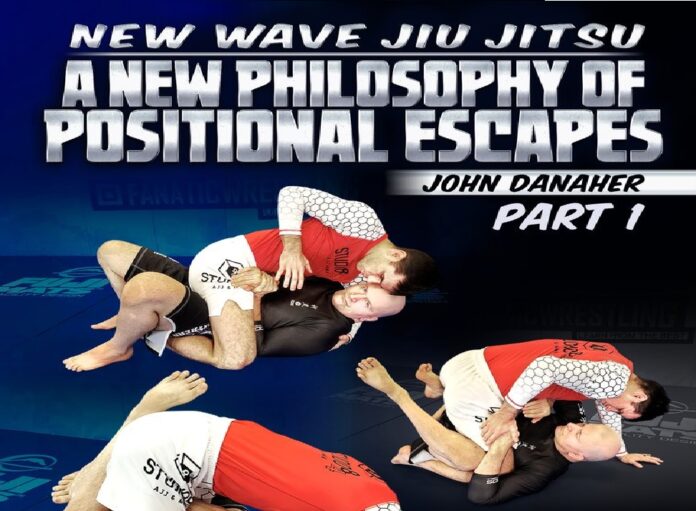 After the initial No-Gi six-part “Enter the System” series focusing on submissions, the life-changing 8-part Gi bundle “Go Further Faster” and the innovative “Feet To Floor” takedown series with 4 DVD sets, it is time for something new from the one and only John Danaher. This time around, he focuses on a subject he briefly touched upon in his first Gi DVD – escapes. Check out our BJJ DVD Review of John Danaher’s latest DVD “New Wave Jiu-Jitsu: Positional Escapes”.

Getting out of tight spots has always been a problem in BJJ, given that the nature of the sport has one person on the attack and the other on the defense during most of the exchanges. SO far, there haven’t been many people that have tried to actually systematize escapees and defensive BJJ, though. In fact, apart from Priit Mihkelson, there hasn’t been anyone that has gone down that road. That has left a pretty big gap to be filled, and it is now the evil BJJ mastermind himself, John Danaher that is stepping up to fill it with the “New Wave Jiu-Jitsu: Positional Escapes” DVD. Knowing him, we’re in for yet another multi-part collection though!

The BJJ world is full of different instructional DVDs. The one thing they have in common, though, is that the majority of them focus on attacking. Whether it is sweeps, submissions, passes, takedowns, transitions, holding top positions, or whatever else is left, most BJJ DVDs out there focus on offense. GI or No-Gi, offense takes huge precedent over defense, at least when it comes to approaching things methodically and systematically.

The thing is that we now have an abundance of open guards, lapel guards, Berimbolos, and other spinning attacks,. leg locks and pressure passes. What we lack are ways in which we can get out of the tight spots that BJJ inevitably puts us in on a regular basis. With the modern Jiu-Jitsu game in mind, simply learning escapes from positions on their own, without connecting everything together and understanding what is going on is like trying to learn Latin- it may sound cool, but it is essentially a dead language.

Escapes are the next big thing in modern Jiu-Jitsu. Why? It is simple – they have not received the attention they deserve and as a result, the BJJ world is overly saturated with offensive techniques and tactics. That translates to a new wave of escape-oriented DVDs as the Houdini era of BJJ evolution is upon us. Filling the void means that there should be a shift of attention towards the defensive side of BJJ, which is exactly what this latest John Danaher DVD offers.  “New Wave Jiu-Jitsu: Positional Escapes” is an instructional that is long overdue. We have for you the first-ever in-depth BJJ DVD review of this brand new instructional that we certainly hope si going to be a full series.

This new John Danaher DVD instructional is once again an 8-part set, running in excess of 10 hours. Moreover, Danaher is going back to No-Gi in this one, after issuing two series of DVDs (Feet To Floor and Go Further Faster) that were exclusively Gi-oriented. As usual, the organization and level of teaching are as high as you can expect from any BJJ DVD. In fact, the way the instructional is structured all but guarantees that Danaher will expand upon wit with further installments of the New Wave Jiu-Jitsu series.

The “Positional Escapes” DVD focuses precisely on that – getting out of the major bad positions in Jiu-Jitsu. As you will see from our BJJ DVD review, Danaher covers all that major positions from a defensive standpoint – mount, back, side control, knee on belly, body triangle, and how to play the turtle position. Even more so, Danaher shares some key philosophies and concepts that tie everything together and are the reason why the entire system works. Read on for the details!

As expected, this BJJ DVD review kicks off with a look into the introduction to the entire Danaher philosophy of escapes. Before he shares his thoughts on escapes, however, Danaher covers pins and how they work, so that people can understand the escapes he demonstrates.

Speaking of escapes he goes over the traditional escapes approach first, before delivering his verdict on it and sharing his own philosophy. He has an entire gameplan based on satisficing (a decision-making strategy that aims for a satisfactory or adequate result) vs. looking to maximize results. Going over the five main pins of BJJ concludes this part of the instructional, and announces what you can expect to see in the volumes that follow.

The mount position is one where you will end up during most rolls and matches. As such, it can be a really difficult one to get out of, especially against skilled opponents. Danaher’s philosophy on escaping mount has to do with kipping rather than the simple bridge and roll. In fact, he has different kipping directions and motions, all with the goal of getting you out quickly and efficiently.

He also covers the elbow escapes a as solid mount defense option. This volume of “New Wave Jiu-Jitsu: Positional Escapes” will teach you all about the inside and outside variations of the elbow escape.

Arguably the worst position to escape in BJJ is the back or rear mount. Danaher systematizes it perfectly by offering a sequence of events: hand fighting first, and head fighting second. What he basically says is that you should address the danger of chokes first, and then look to sneak out from the bottom up, with the head being the key factor in successful rear mount escapes.

A very important aspect of back escapes is dealing with the rear body triangle. Danaher allocates half of this volume to cover this particular subject. He shares his theory of the four triangles, before introducing a fifth and then uses them to formulate the perfect escape plan. With this, our BJJ DVD review of this Danaher instructional wraps up getting out of the two worst positions in BJJ: the mount and the rear mount.

4. Knee On Belly And Side Pin Escapes

Another position that is really painful to be stuck in is knee on belly. It is very closely associated with side control, or side pins as Danaher calls it. He shares a simple two-part strategy of dealing with knee n bell,y depending on the direction that is available to you.

Half of this volume of “New Wave Jiu-Jitsu: Positional Escapes” addresses the problem of side pin escapes. In fact, this is where John covers the mechanics of the side pin and addresses the central problem in the form of the crossface. He goes on to explain how frames work and how to set up elbow escapes as he covers all the side pin variations you’re likely to encounter.

As mentioned, side pin escapes make up almost half of this BJJ DVD Review, as Danaher really goes deep into them. the reason for this si that there are lots of variations of side pins that are used very frequently. that makes escaping quite the chore unless you can systematize things.

This portion of the DVD covers the mechanics and uses of the elbow escape, reverse shrimping, and who to integrate kipping in side pin escapes. The real gem follows, with the innovative concept of the clamp in regard to dealing with side pins. An escape into leg locks announces an interesting section that covers high leg and knee escapes to deal with most side pins.

The third and final volume that covers side pins takes a look at several interesting escape patterns that include the ankle trap, triceps post, and the sneaky back door escape (my personal favorite).

What is arguably the chapter that most people will find extremely useful is the on north-south escapes. Danaher acknowledges the uniqueness of the position and offers several ways out in this portion of the “New Wave Jiu-Jitsu: Positional Escapes” DVD instructional.

The mother of all defensive positions in BJJ has to be the turtle. It is basically a safe spot where you can hang out, as long as you know how to proceed to safety once you get there. In that sense, Danaher talks a lot about dealing with the tight waist as the crucial problem that turtle players face.

He goes into the basic motions of turtle escapes, like shoulder rolls, body locks and seat belt escapes, and some wrestling classics like the peak out. There are even offensive options in the form of a Sumi Gaeshi variation. This portion of the DVD concludes with a general hand fighting principle from the turtle that is probably y the most important thing to learn from this volume.

8. Putting It All Together

Wrapping up our BJJ DVD Review of Danaher’s “New Wave Jiu-Jitsu: Positional Escapes” is a summary of everything that was laid out so far. Here you will learn all about the principles behind the system, which include the first frame, the role of Kuzushi, what is inside control, the primary entry principle, and the concept of the sixth step. A hugely important chapter is the one on defensive responsibilities, which is basically the starting position of the entire system.

Any John Danaher DVD instructional has a lot to offer. This one, though, is different. It covers an aspect of BJJ that is as obscure as leg locks once were, even though everyone thinks they understand defensive BJJ and escapes. As you can see from our detailed BJJ DVD review, “New Wave Jiu-Jitsu: Positional Escapes” is different not just from any other DVD out there, but also from Danaher’s previous instructionals too. It is more than well worth checking out.