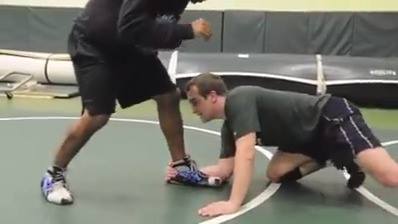 What is the one thing that BJ folks get the most slack for? Takedowns. To paraphrase what Chris Haueter famously said “the guard has a seductive and rewarding nature”. Going to guard from standing is a safe and lazy way of taking a fight to the ground. It could be argued that a guard pull is also technically a takedown, and I’m on board that particular train of thought. However, the fact remains that we all need to build a takedown game for ourselves. The one thing to consider, though, is looking at “lazy”, low risk but still highly effective takedowns that won’t require Olympic level conditioning in order to perform. The low single for BJJ fits this bill perfectly.

When we’re rolling or competing in BJJ, we usually aim to take the route of least resistance. If we could be lazy about it in the process then that’s a welcome bonus. The nature of BJJ is such that it is more of a chess match than athletic endeavor at times. It is why we love it so much. That said, on the feet, things are slightly different. There’s much more movement in more different planes of motion than on the ground. Moreover, things tend to happen fast and are usually the complete opposite of BJJ exchange on the ground. There are plenty of interesting options to add to your takedown game that can help you mitigate this, but I do think the low single for BJJ is the best possible low risk-high reward takedown option.

Contents hide
Building A Versatile Takedown Game For BJJ
What Is A Low Single Leg Takedown?
The Low Single For BJJ
Conclusion

When you think of takedowns for BJJ, what’s the first thing that comes to your mind? If you’re thinking of double and single legs, or front headlocks or UchiMatas than you’re on the right track. All of them work and they’ll be great for your takedown game. You just need to dedicate a few years to each of them. And that right there is the truth nobody likes to hear.

In Brazilian Jiu-Jitsu, on the ground, we have all the time in the world to get used to stuff. Moreover, you can focus on doing one thing over and over again from different spots and rally get the hang of it fast. Takedowns are a whole different can of worms. Three are things like distance, timing, level change, grip tactics that you need to drill over and over again, since it is much more about feel and movement that thinking and setting traps, like on the ground.

Speaking of levels, BJJ folks usually see only two levels for executing a takedown. One is standing high, where most Jud throws and the occasional front headlock linger. The other is shooting for a double / single-leg takedown, a Kata Guruma, or anything of the sort. However, we rarely focus on what we can do at a third level, and that’s the ankle level. And I’m not talking about foot sweeps.

The five steps to any takedown (I’ve talked about this before) are stance, motion, level change, penetration, and finishing. These are true for every takedown you need to perform from standing and that includes the low single for BJJ. However, with the low single, you pretty much go from stance and motion to finish, with penetration and level change being so close together that you can’t even tell the ma apart. That translates to a fast takedown, with a low-risk setup and a high percentage of success.

What Is A Low Single Leg Takedown?

The low single is actually one of the most utilized takedowns in wrestling. What exactly is a low single? Well, as the name suggests, it is a single leg takedown, just done with grips lower on the leg than usual. And, given that the usual is knee level, the grips are quite lower in the case of the low single – ankle level. Think ankle pick and you’ll get an idea of where the arms (or at least one of them) need to be. While it may seem like this is a position that extremely easy to get out of or counter, it just isn’t the case. This deceptively tame takedown is actually one of the most dangerous attacks you can use.

In terms of stance and motion wrestlers spend years perfecting those, so I’m just going to skip over them for now. We use different ones in BJJ anyway. The goal with the low single is to get down on all fours. In fact, the lower your shoulders are to the ground, the better. Think turtle position. At the same time you have the one biggest aim of a low single – grab behind the heel. We’ll go more into the specifics of possible grips in the next section. The second “make it or break it” moment after the grip is placing your shoulder on the shin of the opponent, with an ear near the inside of their knee. And yes, the head has to go to the inside if you’re to have any chance of taking people down.

Let’s stop at this point in the takedown for a little while. If you are in a turtle-like position, with a grip on someone’s heel and your shoulder on the shin, you pretty much have control over that leg. The one thing that’s different toa double or single leg is the absence of defensive options – sprawls won’t work. The fact that you’re’ controlling the heel means the leg can’t go back. Moreover, an opponent can’t get it out upwards, or spin around to get out. IN each of these cases, all you need is a bit of a forward push and perhaps a twist to the side and they’ll go right down.

When it comes to building a takedown game around the low single for BJJ, this is all the wrestling information about the takedown you’ll ever need.

The Low Single For BJJ

So, how do you make the low single for BJJ work for you? Easy – you start learning it from the position you’re already good at. In the case of Jiu-Jitsu, that would be the ground. More precisely, guard. Any guard. The goal is to figure out where the arm grips and how to control the leg with your shoulder/head. The turtle is a great spot to start from as well. IN fact, the first few times you go for a slow single in BJJ, it should be a sweep rather than a takedown.  I told you it is a versatile move.

When it comes to actually set it up as a takedown, the same motions you do for a double leg will suffice. Think of a penetration step that has the goal of actually only getting you near the lead leg. This is exactly why you’ll succeed- there’s no need to get both legs. The lead leg is all you want and you do want to go low, which is often where opponents try and push you when you grab a hold of their ankle.

Holding on to the leg can be improved in two ways. First, focus on having the fingers of your gripping arm around the heel ads deep and as low possible. You want your pinky finger to be touching the mats. Next, use the forearm to cover the outside part of the top of the foot. This makes it impossible to remove the leg form the position.

For a finish, you can just push. Or, you could try and get a grip on the other heel as well, this time from the inside. Alternatively, you can also go for a double leg if you cut the corner and for the opponent to turn. You might even end up with a back take if they try to twist in order to get the leg out. The options are endless and you can get to all of them from a position that is extremely easy to obtain in the first place. The low single for BJJ is the perfect move to start building a takedown game around. The best part is that it doesn’t matter how much experience you have – the move works for everyone.

Ifyou’reoneofthose highly athletic folks that can explode into a power double faster than the blink of an eye, then you don’t need my advice on building a takedown game. However, that athleticism won’t last forever, so even you might think about having a backup. For all the rest of us “mortal” grapplers out there, the low single for BJJ is one of the slickest and laziest takedowns you can learn. In fact, if wrestlers didn’t already have this one I bet we would’ve come up with it in Jiu-Jitsu.