The one source of arguably the most BJJ memes out there is definitely takedowns. Brazilian Jiu-Jitsu folks, particularly those that love the modern game, are in dire need of some good old takedown training. Pulling guard is fun and effective and might even be considered a takedown. However, it is only one aspect of getting the fight to the ground. Yes, learning takedowns is hard and not all people can do all of them. Or so you think. There is a simple formula out there that’ll allow you to learn and master literally any Jiu-Jitsu takedown you choose. It is not a shortcut, though and it will require lots of training. However, it will allow you to constantly add to your standing game and become a well-rounded grappler.

I have to confess, even though I have a solid Judo background, I’m amongst the people who don’t particularly enjoy training takedowns. Well, at least I was, until la short while ago. Completely by chance, I came about an old wrestling methodology of training takedowns that completely changed my take on takedown training. Apply it to any Jiu-Jitsu takedown there is, and you’ll see that the method is foolproof. The secret is in the simplicity of the method. What you’ll learn today is how to spend the most time training the most important part of a takedown, rather than focusing on the most useless one.

Getting To The Ground

The point of training Brazilian Jiu-Jitsu is to engage in very elaborate ground fighting. That’s what makes it fun and addictive for the most part. However, once you have to start standing, in training or competition, people usually seem like they just wandered through the door. The issue is not helped at all by the fact that guard pulling is Jiu-Jitsu’s only original takedown.

The fact of the matter is that BJJ people either suck at takedowns or are good at only one or two of them. OF course, there are exceptions to the rule, but this still holds true for the vast majority. That said, this is not a bad strategy. It will definitely get you thought blue and most likely, purple belt. However, once you hit advanced levels, the combination of pulling guard and your one “go-to“ takedown is not enough. And, learning a new takedown from scratch at this level can be a real hassle.

Let’s face it, Brazilian Jiu-Jitsu is a lazy sport at its core. It is one of the reasons so many people like it. First of all, you’re training in a relaxed atmosphere with friendly faces. Next, you spend the majority of the time on the ground. Finally, you can choose to go as hard or as easy as you like. All of this makes BJJ Grapplers pretty complacent compared to wrestlers or Judokas, for example. Still instead of figuring out that you actually need takedowns after years of training (like I did) why not focus on actually learning a bunch of them early on? It is not about which Jiu-jitsu takedown you’ll use. It’s about understanding how to train and have as many of them at your disposal at all times.

The Five Phases Of A Jiu-Jitsu Takedown

When it comes to the phases of a takedown, there are essentially 5 main ones. If you go through each and every one of them, you’ll end up with a perfect takedown every time. Conversely, if you rush any of them, or skip any of them, your takedown attempt is certain to fall apart. It is as easy as following a five-step process. The only catch is that you need to spend a lot of time training each and every phase of a takedown in order to really polish it. But that’s no different than training any other BJJ technique, is it? Moreover, the same principle of phases, and more importantly, hope to train them, is applicable to just about every other aspect of BJJ.

The first thing that is a condition for any Jiu-Jitsu takedown to work is a stance. You need to understand how you need to stand in order to maximize your chances of executing all the subsequent phases. This is also the easiest portion of a takedown, as stance work is simple and requires little time to master. Just make sure you factor in same and opposite side stances and head and arm position.

Here is where things get specific. You never see two grapplers standstill opposite one another at a competition, do you?  No, people are always circling each other, getting closer or further, and trying to open up angles for their takedowns. This is all called motion. And, if you take a look at wrestlers and Judokas you’ll notice that all of their motion is highly specific. Namely, different motion patterns elicit different reactions, opening different takedowns. That means if you know how to stand and move in a specific stance, you’re maximizing your chances of getting a specific throw or takedown.

This is another aspect of takedown training that’s not particularly complicated. However, it is also one that many people miss in the heat of battle. Tell someone to train a double leg takedown, and they’ll carry out each step perfectly. Have them do it in position sparing and the one thing that’ll obviously be missing is any sort of level change. In essence, it is really simple If you do not get low, you won’t be able to get to the legs.

This is one of the most technical aspects of training takedowns. Once you get in a good position and at the correct level, you need to actually get to the legs. It doesn’t matter which Jiu-Jitsu takedowns you go for, you have to get close to the opponent in order to set it up. This is where penetration comes to the mix. I could even go as far as claiming that this is the most important phase of any takedown. It is all about distance and connection here nod you need to spend a lot of time training this phase.

Finally, the cherry on the cake. In this case, it is how you finish a takedown. Let’s stick to our double leg example. Once you penetrate, you should end up in a prime position to finish. If you’re highly technical, explosiveness and inertia won’t really factor into how successful you are with your takedown. Contrary to popular belief, this is actually the phase that requires the most attention because this is where you’ll run into the most resistance. To make things simple, your finishing should be absolutely perfect if you hope to develop killer takedowns. And you’ll really need to put in time drilling this.

Now that the phases are out of the way, let’s take a look at how people usually learn takedowns. Regardless if they know the phases or not, the standard way of learning usually has you starting with the stance (phase 1) and going through all the way to phase 5. If you take time to use this method and spend time in every phase, building on the previous one, you’ll see a clear flaw.

Let’s say you spend a certain amount of time or reps training your stance. You then do the same with phase 2 – motion. However, as we said, you build each phase on the previous one., that means you’ve now done double the work on the stance. Going forward, you ultimately end up with just one set of time or reps on the last phase, which is the most important one, and 5 sets on the first one, which is the least important one. You see the problem here, right?

Let’s now think in reverse. Imagine starting takedown training from phase 5. Now, all you need to do is get your training partner to the ground. Next, you start from phase 4 – penetration. Now you’re training penetration in addition to finishing. Then you start to level change, penetrate and then finish. As you get to training stance and motion, you already have a ton of reps in the most important area – actually finishing a Jiu-Jitsu takedown.

Whatever your preferences are in terms of takedowns, the fact is you have to work on them. And, just like in any other area of BJJ, having only one great Jiu-Jitsu takedowns is a recipe for disaster. The method I outlined above is a foolproof way of succeeding in learning any takedown or throw you choose. It is guaranteed to help you raise your standing game very quickly and efficiently. Give it a try! 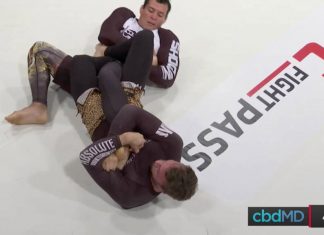 BJJ World - May 12, 2020 0
Leg locks don’t work! I guess the build-up to the Submission Underground 13 was the last time that this phrase really managed to hold...