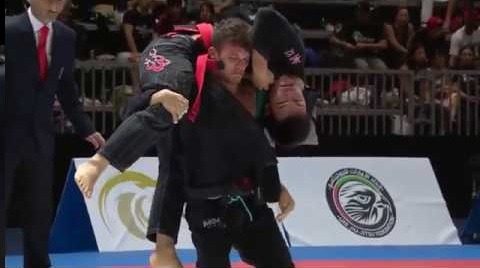 The loop choke could just be the sneakiest choke in all of Jiu-Jitsu. Well, not all of it, since you can’t really pull it off without a Gi. However, when a Gi is in the game, you can pretty much hit a loop choke from anywhere. I love using it in combination with guillotine chokes in order to be able to move an opponent from top or bottom into positions I like. In fact, the loop choke shares many similarities with the guillotine choke. One such example is that you can do a standing loop choke to finish opponents quickly and in a devastating fashion. And it may just be even more effective than standing guillotines.

Getting Familiar With The Loop Choke

The standing loop choke is a bit different than the one done on the ground, but it shares the same principles. Conversely, all the little tip s and trick for a regular loop choke apply, so we’ll take a look at the basic version before we take things to the feet.

The loop choke is basically a guillotine choke done with a grip on the opponent’s collar, rather than any guillotine grip variation. You can look at it as a cheat choke when it comes to attacking a guillotine with the Gi. Many times the guillotine won’t work because the Gi is in the way of the grip. Well, instead of moaning about it, if you decide to use Gi that is “in the way” you’ll get one of the easiest chokes in Jiu-Jitsu.

For the loop choke finish, you want to have an arm over like for guillotine, and grab the opposite side collar with four fingers on the inside. That’s where the similarities with a guillotine end, though. There’s no way to finish a loop choke by squeezing. Instead, you focus on head placement and arm position. Let me elaborate.

The first loop choke “hack” you need to know is that you shouldn’t place the head deep inside your armpit. Only the crown of the opponent’s head should touch your armpit. This makes it impossible for them to use neck strength, or pop their head, out due to the configuration of the choke.

For the finish itself, you place your free arm with the forearm across the back of the opponent’s neck. This is where I’ll share another major game-changing detail – don’t go deep. There’s no need to try and thread your arm deep into your armpit. Having your palm inside your elbow is more than enough to finish the choke. In fact, it makes the choke even tighter, as opposed to having someone’s head deep in your armpit, and the free arm deep inside your own elbow crease.

Getting to the standing lop choke is very similar to how you get to a front headlock position without a Gi. In fact, you still need a snap down, but you’re going to do it with a grip on the collar rather than a collar tie. The goal is to thread the head in the armpit of the arm that has the grip on the collar. The difference with the standing loop choke is that you don’t’ go for the same arm configuration, but rather shoot to grab the leg of an opponent with the free arm. Think of doing a Kata Guruma, AKA the Fireman’s Carry throw. A simple pull there will get you taps more often than not. Finishing, however, looks and feels way better when you actually roll the opponent over your shoulders, down to the ground, and you finish facing upwards.

Another variation of his choke is starting it on the ground, but finishing standing, with the opponent across your shoulders. You can get to the loop choke grip from pretty much anywhere, top or bottom. Once you do, you can try and finish the basic way, with the arm across the back of the head. Alternately, you can look to thread under (especially if you’re doing it form a bottom position) and grab the leg. Similarly to before this will have most people tapping out,.However, if they don’t you can always slowly go to your knees and even stand up completely. Just remember that in these situations opponents tend to go to sleep before they can tap.

Escape early or escape late. That’s the mantra of escapes that you should follow if you want to successfully wiggle out of stuff in BJJ. In the case of the loop choke, there aren’t many late defenses, especially if the person is doing a standing loop choke which tends to get tighter and tighter with every step. Early defenses, however, work and will frustrate a loop choke hunter, at least for a while.

The earliest thing you can do and should be doing anyway is focusing on posture. Many times when people focus on grip breaks they forget about the rest of their body, including their posture. Grips are the perfect way to take your attention to other things, and you should wise up to it. It is way more important to keep a good posture than it is to break the grip. Remember, if people can’t snap you down, they won’t’ be able to get either a guillotine ora loop choke.

That said, in certain situations, you’ll find yourself in the loop. The one thing that makes the choke practical and quick is also a flaw to an extent. If you can time it right, you can actually use the fact that they’re gripping your collar against them. Namely, instead of trying to fight the grip outright, when you’re in the loop, simply undo your Gi from your belt, This will allow the collar to slide across your neck, and the opponent’s grip will actually pull the Gi creating space, rather than choking you. Sneaky, but it can work if you time it right.

Standing submissions are extremely fun and feel like a million buck when you hit them in competition. Apart from some wrist locking options, though I’d say the standing loop choke is your best bet of hitting a standing submission. Granted, you’ll end up on the ground more times than not, but it still counts as a standing submission if you set it up from the feet. Plus, you can always use the loo0p choke position to set up a host of takedowns, from the Kata Guruma toa simpler ankle picks, that you can still turn into loop choke finishes. So many possibilities….