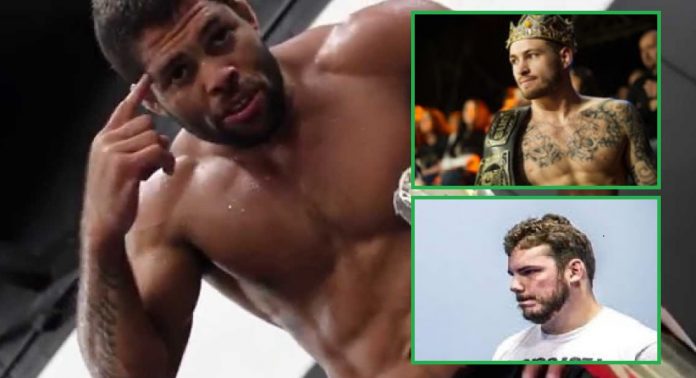 A week ago Gordon Ryan challenged Andre Galvao to a grappling match of any mainstream rules offering $50k of his own money:

“I will put up 50k of my own money. I’ll beat you in any mainstream no gi rules match. Notime/EBI/ADCC/IBJJF. You choose, we all know who wears the crown.” – wrote Gordon Ryan on Galvao’s Instagram profile. 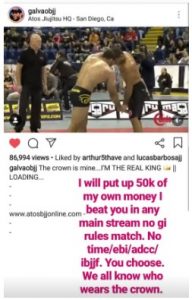 It didn’t take much for Andre Galvao to respond putting himself above Gordon Ryan in Jiu-Jitsu mentioning his main achievements and titles saying he’s worth well more than $50k.

“Us? 50k? Come on. I’m worth more than 1 million dollars in this game.
Just like I said in my last post. Your actions speaks louder than your words. And here are my actions: 5X ADCC, 5x IBJJF…
I’m not gonna waste my time writing all other titles here and all I’ve done for the sport.
I’m tested & approved Gi or No Gi.
I’m forged like gold.”

Soon after that Gordon Ryan responded to Andre Galvao with a reasonable answer about prices and the “real worth” of any athlete. Gordon also didn’t forget to mention that in the case of popularity he’s well above Galvao. While it’s hard to disagree with Gordon’s claim it’s also hard to deny everything that Galvao did for Jiu-Jitsu and all the titles he won in his career.

“In Order for you to be worth a million, people have to want to watch you. But You’re just another generic guy. Not even talking shit. That’s just facts.
If anyone is worth a million it’s me. I bring more eyes to events than you ever will.
Like I said. We can either put up money to bet or someone will pay us to compete. That is in case you want the match.
You’re the “king” of ADCC aren’t you? I’m sure someone could pay you enough money to come back and do a 20 minute ADCC match with me.
That is if you accept. Or you can just sit here behind the phone and talk about how you’re worth a million dollars. When in reality that’s just a safety blanker knowing nobody will ever pay you that much because the numbers don’t add up. When you’re ready to actually compete under “your kingdoms ADCC rules” I’ll be sitting here waiting to bring eyes to watch like I always do.” – replied Gordon Ryan to Galvao’s post about his worth

Everyone will agree that Gordon Ryan is currently one of the top competitors in Jiu-Jitsu and grappling today. The “problem” is that he doesn’t have any problems saying that to anyone and he’s not afraid of challenging anyone and putting himself on the line. Problem maybe lies in the fact that not everyone is willing to act like Gordon do and accept challenges. People like Andre galvao maybe wants to enoy their legacy without anyone ruining a second of it and Ryan is just trying to provoke anyone and win against anyone and it seems like he won’t stop with challenges any time soon.
But who can blame him? This type of behavior is actually the way Jiu-Jitsu became popular right?

According to all this, it seems like something weird is going on. Either Andre Galvao really wants that much money or he’s avoiding Gordon Ryan?

No matter of what’s the truth about it Gordon Ryan keeps making fun of Galvao on social media posting meme’s about his offer and Galvao’s “avoiding” of him. 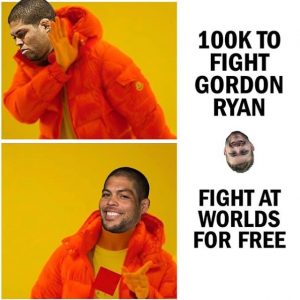 We just talked to Josh Leduc,(https://www.facebook.com/josh.leduc1) the promoter of Sapateiro and the Gambler’s Invitational because Leduc is willing to pay $300 000 to the winner of the fight between Gordon Ryan and Andre Galvao.
Leduc sent an offer to ATOS HQ via mail but he received an answer from Angelica Galvao, Andre’s wife, speaking on behalf of Andre Galvao that they can negotiate everything when the price is around $1 million.

-Josh Leduc: Is 300k enough for a match with Gordon

-Angelica Galvao: Hi Josh Thanks for your email. We can definitely negotiate when it is around $1M.

-Josh Leduc: You do realize Demetrious Johnson made this to fight in the UFC?

-Angelica Galvao: Yes I do, he was also sold to OneFC. I don’t like to compare Andre to any other fighter, greater or not. This match has no benefit or prestige to be added in his career since he has accomplished all major titles there it. The only up side is the entertainment. With that being said, the compensation must be worthy.

Leduc’s opinion is that Andre Galvao doesn’t want this match to happen and this is his way to avoid the match with Gordon Ryan.

“I would hold the match in a facility that sells 100 seats at $300 a piece and streams it on PPV. Galvao doesn’t want the match — that’s why the steep price. I’ve got to say, professional grappling has grown leaps and bounds in the last four years. I’m very glad to be a small part of it, and even though some demands are outrageous, it helps to grow this sport in the form of monetary compensation.” – Said Leduc to BJJ World 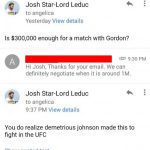 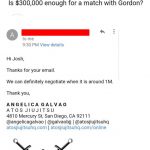 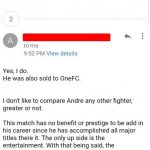 It’s getting even more interesting as Gordon Ryan is simply not stopping. Gordon proposed a new challenge to Galvao saying that they’ll donate all the money from PPV to charity to help children or build a school in Galvao’s hometown.

“Ok, @galvaobjj. I understand it is your belief that beating me won’t add to your legacy. I strongly disagree but that is just my opinion. I also understand you don’t need the money to fight me because you’re a “millionaire” so the money does not matter to you. So since the money doesn’t matter to you here is my proposal. We have a match and we charge viewers for a PPV. ALL of the money will be donated to a charity of your choosing or better yet maybe to help build a school or children’s hospital in São Sebastião, your hometown. Think about all the people we could entertain, but more importantly the people we could help. This match should happen for this greater cause. Help me help children less fortunate. You’re a man of god… what would Jesus do?”

It’s going to be interesting to see what Galvao will say on this.