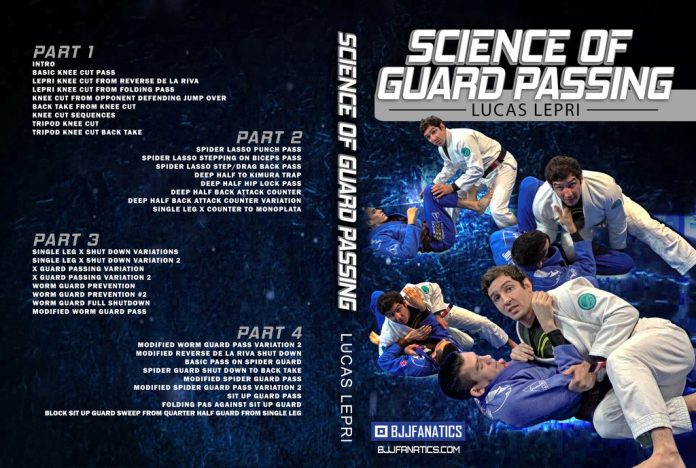 A Lucas Lepri DVD is something most of us grapplers that like collecting DVDs own. The guy is a true grappling wizard and one of the leading guard passers of today. Being able to pass the guard at such a high level in today’s world of fancy guards and leg locks is truly an art. And, there are only a few people that are more versed in it that Lucas Lepri. Plus, there’s an added bonus to learning guard passing from Lepri – he is one of the lighter guys that know how to put unreal pressure on opponents’. That’s exactly the guy you want teaching you all about pressure from the top. His “Science Of Guard Passing” DVD is a real masterpiece and an instruction you simply have to own if you’re a modern-day BJJ competitor.

The thing that makes this Lucas Lepri DVD stand out is the fact that it is brand new and aimed at passing all modern-day guards. it employs both fundamental and innovative original concepts of passing virtually any guard. Be advised that this is a Gi instructional, which is one of two guard passing instructionals That should be the first on your 2019 shopping list. Gordon Ryan’s No-Gi guard passing system is about to land any day now, and this Lucas Lepri DVD is its Gi counterpart. After all, it is a multiple-time world champion and one of the best competitors of today demonstrating his bread and butter stuff. A brilliant way to start the year and ensure you’re able to pass any guard, including those of proficient leg lockers.

Why is the topic of guard passing so important in the world of modern Jiu-Jitsu? The answer is simple. During the early 2000s, BJJ guards truly reached new heights. As that happened, guard passing started lagging behind a bit. Then, in the past 7-8 years, lapel guards became a real nuisance for people training in the Gi. Moreover, No-Gi’s version of lapel guards turned out to be leg locks, mostly done from bottom positions. This, in turn, forced guard passing to start evolving in order to catch up. And it did in a fantastic way.

Modern guard passing, like you, ‘ll see in the Science Of Guard Passing Lucas Lepri DVD, is a lot different than old school passing. It addresses the modern-day problems of the BJJ bottom game. If you can’t deal with leg lock attacks, and the hundreds of lapel guard variations, you’ll soon become frustrated. Modern-day guard passing ensures you have systems to beat any guard. Plus, you can be certain it works, because Lepri is yet to encounter someone whose guard he cannot pass in competition.

There’s also another aspect of modern-day guard passing – attacking. Today, guard passing isn’t only about getting to side control. There are plenty of competitions that do not award points, meaning you need something more substantial out of your passes. Now, you need to have attacks ready straight off your passes, or even better, transitional attacks. This may include leg locks, chokes, or simply bypassing side control to the back or mount. The modern-day passing game is a fast-paced, pressure-based one that requires foolproof techniques in order to work against everyone. This Lucas Lepri DVD delivers precisely that, and then some!

Writing about who Lucas Lepri seems redundant, but I’ll do it anyway. He is so well known, that you’re free to skip this section and keep reading the article below. For those of you not knowing why you need a Lucas Lepri DVD, especially the “Science of guard Passing” let me acquaint you with Lepri’s work.

First of all, anyone with over 100 wins at a black belt deserves respect. Competitors with an experience like that, certainly have a lot to teach others, even fellow black belts. Lepri has not only over 100 victories but also has submission wins in more than half of them. In contrast, he only has 25 losses so far in his career, only  2 of which are via submission.

Lepri is a grappler with a Carlson Gracie lineage. He got his black belt from Elan Santiago in 2006. In his first world championship at a black belt, he managed to become a world champion with apparent ease. Originally Lepri was involved in all sorts of sports, before discovering BJJ on Brazilian TV. In 2000 he began training with Elan Santiago. At first, they were BTT, then affiliates of Terrere, and finally they switched to Alliance. After only 6 years of training, Lucas got the black belt and started terrorizing the lightweight division. Now, the 6 times Gi and 3 times No-Gi world champion run his own academy in Charlotte, NC.

One of the best things about this Lucas Lepri DVD is that he spares no details on the basic ideas behind his favorite moves. He is one of the scariest guard passers in the game. This is all due to his unique approach to passing the guard. People in BJJ tend to develop one of two passing styles. they either choose to attack with pressure passes and stay close or go for speed passes from a relative distance. What’s rare to see is someone that has a passing system that incorporates both. Lucas Lepri is one of the rare grapplers that have that style and is effective with it at the highest level of the sport. 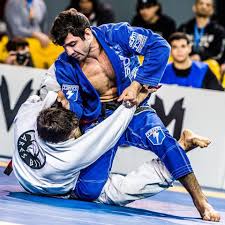 The first thing Lepri does is figure out what he’s up against. He doesn’t just go for a pass, not before he knows what the guard he’s up against is all about. Then, he finds the best way to shut down the guard and all possible attacks before passing it. The “Science of Guard Passing” Lucas Lepri DVD is the only instructional where you’ll find detailed instructions on passing any guard with Lepri’s concepts. he’ll help you transform your passing game by offering you a new perspective on how passing works. Plus, he’s no stranger to submissions as a result of his guard passing efforts. A modern-day passer, by all accounts.

The “Science Of Guard passing” Lucas Lepri DVD is a 4 part DVD set that is meticulous in every sense of the word. The contents are divided into very logical sections, and there’s a clear progression throughout the volumes. The first one is more of an introduction and something that even beginners can use. As the DVDs progress, Lepri goes deeper into the art of passing, offering concepts that even black belts will find effective.

In terms of quality, you get flawless camera work and impeccable sound. The DVD has information on just about every guard you might encounter, and how to deal with them. Keep in mind that this is a Gi DVD, although many of the things are just as applicable in the No-Gi. There are about a dozen chapters in each volume, with subjects clearly separate from each other. After presenting all the information on a subject, Lepri offers ways in which you can integrate it with previous ones, All in all, you get a complete modern-day guard passing system.

The first volume in the “Science Of Guard passing” Lucas Lepri DVD is all about core concepts. it starts with an introduction by Lucas to his philosophy of passing. After that, he gives a very insightful explanation as to what the knee cut pass is actually about. From there, he goes on to share his ways of applying it. He offers direct passing options, like his knee cut against the reverse De la Riva, as well as combo options, like folding pass into a knee cut.

True to his aggressive style, Lepri offers direct back takes from the knee cut, as well as complete sequences. The Tripod knee cut is a very practical concept, that also has different variations available. All in all, this volume is the best knee cut instructional ever recorded! And Lepri is just getting started!

Modern-day guards often get people to go under you in order to easily offset the balance from a safe spot. The spider guard is one such example and in particular the spider lasso. It works from a distance and is a Gi only guard that’s really tough to pass against a skillful opponent. Lepri’s take on it is to punch. Well, not literally, but use what he calls a punch pass. And it works like a charm!

After a few spider lasso guard passes, Lepri takes on another very difficult guard – the deep half. Here, Lucas spends a bit more time, given the complexity of the position. The hip lock pass offers is nothing short of astonishing. He also clears up common mistakes with the Kimura trap system for people caught in the deep half. The best thing about this part of the Lucas Lepri DVD ist hat he provides you with the secret to nullify all deep half attacks, and in particular back takes.

Things start to get very interesting as the “Science Of Guard passing” Lucas Lepri DVD progresses. The third volume brings some of the most important pass concepts for any modern-day grappler. First up is the dreaded Single leg X guard, the gateway to countless leg locks. In true Lepri style, Lucas covers how to shut it down and even get a submission 9Monoplata) straight away. From the SIngle leg X, he moves on to the X guard, with a couple of unstoppable passing variations.

Some of the most important passes for Gi players are those of intricate lapel guards like the Worm guard. Not only are these guards extremely hard to pass but they also cut circulation to your leg if you stay in them too long. Lepri makes sure you now have plentiful options of shutting the worm guard down and passing it with ease. As with every high-percentage defense, it starts with prevention, then goes into making the guard ineffective, and finally, you get passing options. Tried and tested, works without a glitch!

Finally, Lucas Lepri goes into real guard passing art with the final volume of this amazing instructional. It all starts with a few modifications to the worm guard pass Lucas demonstrated earlier. Then, he goes on to address some of the most common guards you’ll run into at tournaments. however, his take on passing them is anything but orthodox.

The spider guard, reverse De La Riva, sit up guard and quarter guard are just some of the things covered in this volume. Lepri spends the most time on the spider guard, offering direct back takes to skip over any possibility for your opponent recovering from the pass. Lot’s of shutdowns and passing techniques conclude a truly amazing Lucas Lepri DVD that’s the perfect way to kick off 2019! Highly recommended!