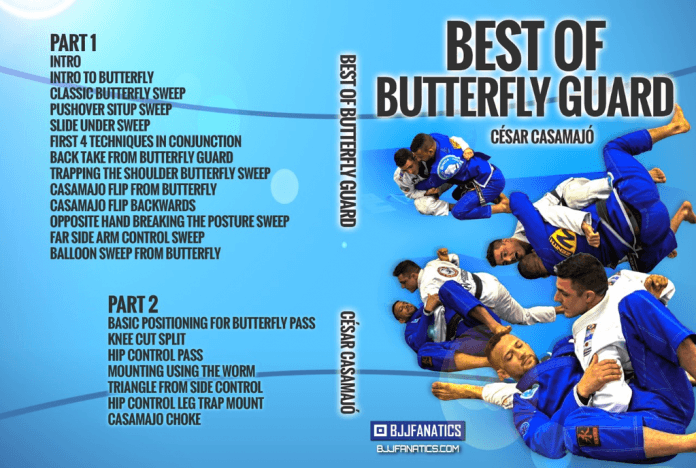 If you ask any of the top level No-Gi competitors of today what the best guard is, you’ll get the answer “butterfly guard” more often than not. While some people look down on it as a means of butt scooting, it is, by all means, a really efficient position. Some people are so proficient at it that they take it to a completely new level. One of them is Cesar Casamajo,  a BJJ black belt that doesn’t care if he’s going Gi or No-Gi. He is one of the people that really know all the nooks and crannies of the butterfly guard. In fact, he has so much info on it, he had to condense it into a “Best Of Butterfly Guard” Cesar Casamajo DVD.

The first time you discover butterfly guard, you start thinking that it is the holy grail. Later on, it becomes something that only used to work at lower levels. For most people, it takes a really advanced level until they reactivate the butterfly again. Of course, the second time around, it is a whole different ball game. Well, the “Best Of Butterfly Guard” Cesar Casamajo DVD can help you skip the phase where you think the butterfly guard doesn’t work. It is a great resource to help you figure out one of the best BJJ guards very early, giving you a huge edge over everyone.

The Story Of The Butterfly Guard

The butterfly guard is actually considered a classic guard, somewhere along the lines of the closed guard. It is based on using hooks to control the opponent, which is a simple and very old grappling concept. Historically speaking, the butterfly guard was a part of many grappling arts, including Judo, catch wrestling and even Sambo. Sergio “Bolão” Souza was the man that built a legacy on the butterfly guard in the early ’80s. Jean Jacques Machado, Renzo Gracie, Nino Schembri, and others took it even further in the ’90s. Later, Terere and Marcelo Garcia made even further advancements, before ultimately it turned into the headquarters position fro launching leg lock attacks in modern grappling.

The butterfly guard is crazy effective given that it provides an easy defensive position, mobile control via hooks and an easy rout under the opponent’s center of gravity. The fact that it works just as well against standing and kneeling opponents, as well as from a supine and seated position also makes it very versatile. The positioning is easy but the mechanics are anything but. it takes someone with years of experience and knowledge to really help you get the hang of the butterfly guard. Someone like Cesar Casamajo.

Whenever I get my hands on a BJJ DVD instructional that has 4 or more parts I’m both stoked and a little bit anxious. Jiu-Jitsu is a complicated sport and it requires a lot of explanation in order to understand specific aspects of it. However, the best approach is to explain everything step by step in a simple manner. the more complicated an explanation, the more questions arise. This Cesar Casamajo DVD is truly a “Best Of” edition.

The instructional dumbs down the butterfly guard as much as possible. At the same time, it follows a progressive pattern, taking things from fundamentals all the way to advanced. The instructional doesn’t have 10 volumes that try and focus on every possible way in which you can twist your toes during hooking. Instead, everything is covered in two volumes, each containing about a dozen or so chapters. The chapters are not too long but do cover everything you could think of. The subjects of both volumes change, with the first covering butterfly guard attacks, and the second ways of passing the butterfly guard.

Cesar Casamajo himself is an awesome teacher. He really takes care of things in a quick and precise manner. The Brazilian is a black belt under Aldo Caveirinha and a multiple times IBJJF champion. He was particularly feared as a brown belt, with everyone literally running away from his butterfly guard. Cesar represents the “Caveirinha Jiu-Jitsu Family” team and is an active competitor still.

The “Best Of Butterfly Guard” Cesar Casamajo DVD starts off with an introduction. Cesar introduces himself first, and then his butterfly guard history and approach. Of course, the “classic” BJJ sweep made famous by “Bolão” is the first out of the gate. Cesar likes to modify it a bit though. Not only that, but he made it equally as effective for both Gi and No-Gi with the same grips.

Speaking of sweeps, there are a lot of them in this volume. After the classic one, Cesar covers the pushover and slide under weeps. This way, he allows you to sweep in three different directions using only slight adjustments in your position. the best thing about it is that he shows you how to connect all three of them in an unstoppable sequence.

Before continuing with even more sweeps, Casamajo takes a brief detour. Namely, he demonstrates a back that that is as slick as it is basic. At the highest levels, it is basics that win fights. With this notion in mind, Cesar covers things simply but without leaving anything out.

Finally, he goes back to sweeps, covering a multitude of them in the chapters that follow. A real special is the “Casamajo flip” that’s a very cool sweep variation specific to Cesar. The shoudler trap sweep is also an awesome one that’s sure to get lots of opponents on their backs.

The second portion of the instructional changes tunes completely. It takes a butterfly guard expert to be able to pass the butterfly guard of high-level grapplers. Since Casamajo is one of the leading experts in the field, he also has a sick passing game. Here, he demonstrates how he likes to disrupt and dismantle the butterfly guard when on top.

It all starts with some basics. However, instead of offering crazy ways of getting past the guard, Cesar starts you off slow – with positioning. He likes to use a great concept by having the same starting position for different passes. As expected, the knee cut pass features first, given the position of the guard. The common issue with this pass is the entry, which Cesar’s positioning completely takes care of.

the hip control pass is another real gem by Cesar. In fact, you can use this one as a concept on passing plenty of other guards as well. Which brings us to some signature Cesar moves. There’s a literal way of “worming” yourself into the mount along with a “trap mount” variation. Casamajo finishes with some submission options. these include a triangle choke from side control, straight off passing and a signature Casamajo choke.

The  “best Of Butterfly Guard” Cesar Casamajo DVD is one of the staples of butterfly guard instructionals. While it may not get the recognition it should, it certainly makes up for it with quality. The way the instructional is structured makes it one of the best BJJ DVDs ever released. Moreover, it won’t leave beginners scratching their head, lost in hours upon hours of material. A straight to the point BJJ DVD – something we don’t see that often nowadays.