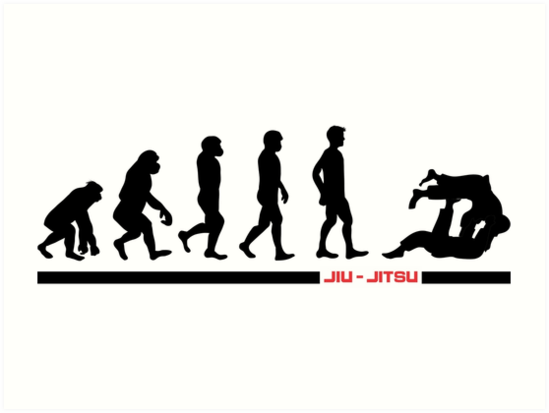 The one thing that sets BJJ apart from other martial arts is not the ability to fight off the back, or the thousands of funky techniques that nobody has thought of. It is the fact that Jiu-Jitsu keeps evolving constantly that really maks it special. Well, that and rolling, because, rolling is just too much fun, particularly now that we’re stuck at home with this Covid-19 virus thing. That said, we now have enough time to read up on Jiu-Jitsu history, so here’s a different bit of history to what you may be used to – the story of BJJ evolution.

It may be hard to grasp at the moment, but you can contribute to the evolution of Brazilian Jiu-Jitsu regardless fo which belt level you are at. I’ve had white belts in the gym figure out submission grips and tiny passing details by accident. As small of a ripple as that might be in the ocean of Jiu-Jitsu, it is still significant. That’s precisely why I let every new student know from the very first moment that they can, and should contribute to the BJJ evolution. As far as higher belts go, innovation is what drives us forward, so share what you discover and make sure you keep a track of it.

Contents hide
The BJJ Evolution So Far: A Better Story Then Darwin’s
Gracie Jiu-Jitsu
BJJ For MMA
Speed And Spinning: The Rise Of Sports Jiu-Jitsu In The Gi
The No-Gi Submission Only
Professional Grappling And A Glimpse Into Future Jiu-JItsu
Conclusion

The BJJ Evolution So Far: A Better Story Then Darwin’s

The way Brazilian Jiu-Jitsu came to be is a story that couldn’t be put together by a movie director. A Japanese star Judoka and fighter, trained by the founder of Judo himself and forged through plenty of catch wrestling and NHB matches across the world, ends up in Brazil. There a scrawny kid takes up his lessons, and eventually, teaches an even scrawnier brother of his what he learned. This brother then keeps modifying everything that has already been modified and adjusted an ends up with a system so effective, that the brothers issued an open challenge for anyone to come and test them out.

However, the best part is that it doesn’t stop there. The Gracies might be a difficult family to reckon with, and they certainly did some things questionably. However, oen of their best decisions is to allow and even encourage people to further develop Jiu-Jitsu. Imagine how boring it would’ve been if BJJ was still the same as when Helio And Carlos did it. Instead, we’re a part fo this crazy thing that keeps growing every day and encompasses our entire lives.

The BJJ evolution is not an easy thing to track, to be honest. It all depends on how we look at it. For the purposes of this article, I went really broadly, organizing things in periods. Consider each of these evolutionary periods of grappling to be akin to evolutionary periods of our species, for example. So we’re talking from neanderthal to modern human, and not about fine nuances like figuring out fire, or organizing into different social systems. 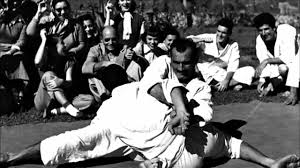 Let there be light. The organization of battlefield Ju-Jitsu into a more sports-like Judo by Jigoro Kano in Japan is our Big Bang of the BJJ evolution. So Gracie Jiu-Jitsu, the Helio Gracie version is the first step in our BJJ evolution. This was the practical Jiu-Jitsu, so to speak. Everything was about self-defense, there was no-nonsense, and the closed guard was the main position to play from, as nobody knew how to fight off the back.

Of course, even then, Jiu-Jitsu was evolving, and other key positions we use today, from the half guard to back control were refined and developed during these early days. However, the mount and guard determined the top positions to head to, and lapel work was down to a minimum.

After BJJ spread out of Brazil, and Rorion and the brilliant idea of taking Gracie challenge to a whole new level by creating the UFC, an entirely new subspecies of BJJ evolved – Mixed Martial Arts. It all happened because of BJJ though, and suddenly everyone wanted to know what this crazy new grappling style is. That brought about a new spur in BJ evolution – BJJ for MMA.

As people started training, BJJ got a lot more technical, as people tried to break everything down and understand things. At the same time, they attempted to mix it up with boxing and kickboxing, and even some wrestling. This is when the takedown game in Jiu-Jitsu developed even more, along with the strong positional game. Holding positions in a way that and you safe, but could open up strikes or submissions became the theme. Once again, a lot of work went into the closed guard and making it a fortress nobody can penetrate. However, the opposite happened – guard passing became a thing.

Speed And Spinning: The Rise Of Sports Jiu-Jitsu In The Gi

When Jiu-Jitsu unglued itself from MMA it went in the direction of becoming a sport. Starting out as a fighting system, then an art within the art of MMA, now BJJ emerged as its own sport. This is the period of Gi BJJ evolution and the emergence of some of the world’s greatest competitors. This is when the likes of Roger Gracie, Jacare Souza, and co. really put BJJ on the map of martial arts. 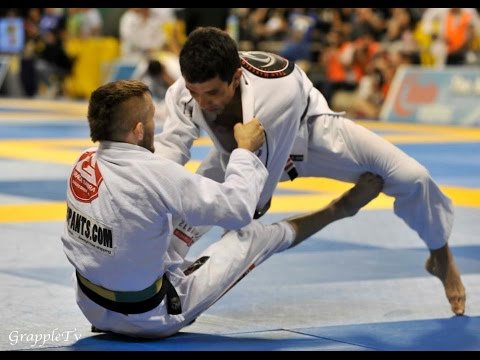 Following in their footsteps, a new generation of grapplers brought about a completely new form of BJJ. The Mendes brothers and the Miyaos started spinning like Ninja Turtle, creating the berimbolo and all the different guards and crazy stuffed that ended up being born from that. At the same time, people excelling at the top game, like Rodolfo Vieira, The Ribeiro brothers and Lovato started discovering crazy and exciting ways to pass guards, taking this whole craziness that is Jiu-Jitsu to a completely different level.

The No-Gi Submission Only

Given the rise of Gi Jiu-Jitsu, it was just a question of time when someone would dedicate more time to No-gi BJJ. To be fair, No-Gi BJJ came into focus when MMA first got to the shape it still has today. back then, following closely behind Gi sports Jiu-Jitsu was No-Gi, in the form of ADCC. This was, and still is the ultimate test of grappling, as close to an Olympic event that the sport has. Names like Marcelo Garcia, Dean Lister, and Andre Galvao took the spotlight.

Moreover, others took the No-Gi BJJ evolution into a completely new and exciting direction. Eddie Bravo is famous for having a world-wide empire under the 10th Planet Jiu-Jitsu banner that works exclusively without the Gi. His innovations in both technical terms and competition formats are what brought about yet another paradigm shift in Jiu-Jitsu: the rise of the submission-only No-Gi grappling scene and professional grappling.

Professional Grappling And A Glimpse Into Future Jiu-JItsu

Sub only events led to the emergence of a completely new breed of grapplers. Of course, John Danaher and his Death Squad spring into mind first. They took the leg lock game to a whole new level, showing the world that BJJ is far from its’ final shape, whatever that might be.

At the same time, professional grappling finally took off. Gordon Ryan might be on the top of the food chain, able to buy a million-dollar house after a few years of pro grappling. however, others that do it as a profession are not too worse off, and it is taking stride all across the world.

Finally, as far as the future of Jiu-Jitsu is concerned, I’d say things are going to et only more and more interesting. The conceptual understanding of BJJ is at an all-time high, meaning the craziness that stems from it is going to be a whole new level of crazy. Plus, with all the BJJ camps and cruises and stuff people have a worldwide platform of exchanging experiences.

Oh, and there are now BJJ DVD’s available to learn from. Like, lots and lots of BJJ DVDs.

The BJJ evolution is a fascinating thing to look into. I certainly hope that in future articles I’ll break down each of these most important periods into all the main things that marked them, and took our art forward. Until such a time, remember that everyone’s contribution is important and that you can change where eBJJ evolves next.