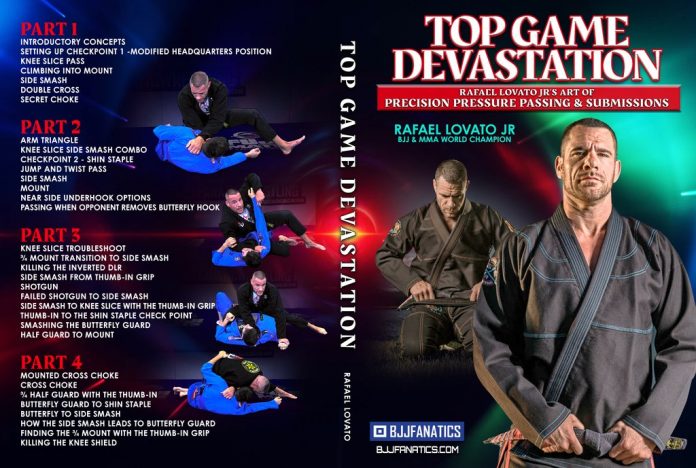 Finally! If there’s a one instructional BJJ folks have been waiting for it is this one! To be honest, people who enjoy a pressure oriented top game, in particular, were probably pulling their hair out waiting for this DVD to finally drop. And drop it did. Let’s face it even people that are not into pressure passing are going to get a Rafael Lovato Jr DVD. Especially after all his crazy methodical MMA success in Bellator, and recently in grappling super fights. Not to mention the fact that it’s been years since we’ve seen something new from Lovato. Today, up for review, it’s Lovato’s brand new “Top Game Devastation” BJJ DVD instructional.

Rafael Lovato Jr is one grappler that is a joy to watch. Whether you’re seeing him compete in BJJ or MMA, or you’re at a seminar or looking at one of his DVDs, you’re certainly in for some great entertainment. Lovato is one of those old-school guys that’s notorious for his pressure game, particularly in the passing department. However, in the “Top Game Devastation” DVD he is also completely up to date with all the new stuff going on in Jiu-Jitsu. In other words, this brand new Rafael Lovato Jr DVD is the perfect blend of old-school pressure from the top and some modern Jiu-jitsu craziness. One for the future, for sure.

At this point in time, it is probably needless to talk about who Lovato is or what he’s achieved. I mean, even people that might not have followed his grappling career know of his MMA exploits. Speaking of which, he has the perfect MMA career so far, with no defeats and 10 victories 6 of which by submission. And all his efforts are now crowned with the Bellator middleweight belt, that’s nobody has still even come close to taking from him.

BJJ-wise, Rafael Lovato Jr is a black belt under Carlos Machado. He has been a black belt for a while now, since 2004 when he was 21. Despite being a Machado black belt, he also spent a long time working with the Ribeiro brothers, which is easily identifiable in his game. Moreover, he has cemented his legacy in the history books by being the first non-Brazilian to win the CBJJ Brazilian Championship twice, the second time conquering the absolute division as well. In addition, he also has a Gi and No-Gi world title each, plus a few masters World titles.

However, that’s hardly the reason people look up to him. Lovato has one of the most well-rounded games in the entire sport of JIu-JItsu. He is extremely well versed from just about anywhere and has a very strong submission game to top it all off. HispreviousDVDs are goldmines of information and have helped many grapplers in their journeys, I included. However, the “Top Game Devastation” Rafael Lovato Jr DVD is something entirely different. This is a modern instructional with extra old school pressure gravy to take it to a level of its own.

In your BJJ training so far, you’ve probably encountered the phrase “Lovato-style passing”, or “Lovato-style pressure”. There’s a huge reason why certain huge aspects of the BJJ game carry Lovato’s style. It is not only that he is notorious for beating everyone with it, from Eduardo Telles Through Cyborg all the way to his most recent one over Ritchie ‘Boogeyman’ Martinez. He is also one of the first people to actually lay his entire systems out in digital format, allowing others to do the same.

While nobody has even come close to Lovato himself his game is certainly a big part of many grapplers worldwide. For example, he is a pioneer of the headquarters position concept. In simple terms, it is a safe spot where you can hang out against many guards before you decide to start passing the legs. Moreover, his in-depth approach to pressure from the top was something nobody really explained on a DVD before. To this day, his concepts are a big part of academy curriculums around the world. And still, somehow the latest Rafael Lovato Jr DVD “Top Game Devastation” managed to trump them all. You’ll see, just stick with the review.

From the very first moment, this DVD kept me really interested. I already knew the teaching style of Lovato, having based my own passing game on some of his previous instructionals. With him, you get a methodical teacher that likes to provide concepts organized in bundles, so that you have more than one tool for just about any situation. This latest Rafael Lovato Jr DVD is the same. However, whereas I thought that it can’t really get better, Lovato proved me wrong. Despite having one of the most notorious pressure games around, along with the Ribeiro brothers, Lovato proved that there’s even more pressure to be found. Plus, he really wins at the most difficult thing when it comes to pressure passing – explaining how to be heavy.

The “Top Game Devastation” instructional is suitable for all levels of practitioners. While ti is a Gi instructional, featuring lots of specific grips, most of the concepts are transferrable to No-Gi, and/or even MMA. The instructional is structured in four volumes, each covering things in a very organized manner. What you need to understand that while there’s lots of pressure passing in it, this is not a pressure passing DVD. Instead, it is an instructional on pressure from every top position that’s available in Jiu-Jitsu. AS such, Lovato does like to use the knee slice to set things up. You can expect a lot of new details on stuff like arm triangle and collar choke, as well as a crucial mount, side control, and passing details.

The first volume of this Rafael Lovato Jr DVD starts with a throwback to his earlier pressure passing systems. In other words, the Headquarters position makes a comeback, much to my personal pleasure. That said, This time around it is a modified version of the position, or better said an updated one. It leads into the Knee Slice Pass yet again, and yet again, Lovato finds a way to make it tighter. However, he does not go much deeper than the basic knee lice. Rather, he shows us how to slide into mount next without releasing an ounce of pressure.

Speaking of pressure, there’s a very long chapter on the side smash. It just so happens, this is my favorite one out of this entire first volume of the “Top Game Devastation” DVD. It is followed by two submissions in the form of the double cross and the secret choke. The official description of this instructional says” art of precision pressure passing and submissions.” Well, these are just two of those “artful” submissions. What I really liked is that Lovato keeps it down to pure fundamentals, but explains them completely, turning them into really advanced attacks.

The reason why the first couple of volumes in this DVD are titled by chapters is down to Lovato’s style. He likes to set up positions that provide you with safety when you roll. IN this case, they are checkpoints that he is aiming to reach in order to establish his immense pressure game from the top. The first checkpoint was the already well-known Headquarters position, albeit modernized. The second checkpoint is the shin staple. As simple as this move is, for some reason, nobody is using it much. And it is effective, even against much bigger, stronger and higher-level opponents.

It is worth mentioning that prior to checkpoint number two, there are a few more cool submissions in this part of the “Top Game Devastation DVD”. One is an arm triangle and the other a knee slice with immense pressure that makes it even worse. Following up on the shin staple is a very cool pass that leads, once again, to the side smash. I’m loving this position more and more as I’m going through this Rafael Lovato Jr DVD. Wrapping up is a great portion on the mount, along with some advanced bypassing notions vs. the butterfly guard.

III – Troubleshooting And The Thumb-In

We are at part three of the “Top Game Devastation” instructional and it is time to look at some troubleshooting. Keeping true to his methodology, Lovato circles aback to help us understand the knee slice even better. Moreover, he starts exploring some position many do not really associate with top pressure often. In this case, it is key information on dealing with the three-quarter mount, for example. The ever-present side smash features again, this time introducing the thumb-in shotgun to make ti that more uncomfortable.

What I loved the most is the option to always return back towards checkpoint one or two from the side smash. The Thumb-In grip is the reason for this and it is a great way to improve your game with the simplest of moves. Not to mention all the shotgun armbars you can find along the way. Finally, Lovato moves to demonstrate his system on passing the most dangerous modern guard of all – the butterfly guard. However, in this volume, all we get is a tease on the subject. Volume four is where all the real action is.

Volume four of this Rafael Lovato Jr DVD starts with one of the top moves you can do in Gi Jiu-Jitsu straight off the bat – the cross collar choke from the mount. While you might argue that Roger Gracie has the best one yet, wait till you see how Lovato does it. You get several variations here, just to make sure you get a tap while feeling like a brick house on top of your opponent.

That said, remember all the butterfly guard passing I mentioned earlier? This is where Lovato really gets into it. And still, what you get is what you already know – shin staples, side smashing, and knee slices. All that’s new is how to get them when the bottom person is in the butterfly guard. And to be honest, it is not all that difficult, once you have clear directions. The final chapter is also a simple one but a real game-changer. It is all about killing the knee shield, and it’s done in the simplest way I’ve seen so far. That’s coming from me, and I’ve trying to take apart knee shields for years now.

Let’s wrap this Rafael Lovato Jr DVD up. “Top Game Devastation” is the ultimate guide to an old school fundamental pressure game designed to kill off modern BJJ. It is the best description of what you get in this crazy instructional. This is not one for those that like to Berimbolo around or fly over opponents. However, it is perfect for all levels, and even both Gi and No-GI. One thing you need to have is patience because Lovato takes things really slow and easy. In return, though, he provides detailed explanations that you’ll never be in doubt about any subject he covers ever again. That’s the case with me, at the very least.