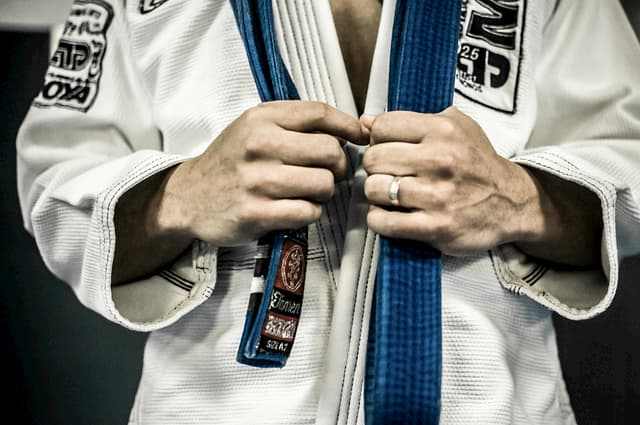 It doesn’t matter how many training partners you have, but rather, what belt they are. Okay, this is not really true, but belt color does matter a lot. In fact, the more training partners you have at a certain belt color, the faster and better you’ll learn Jiu-Jitsu. And not, that belt color is not black. Contrary to popular belief, getting killed constantly does not make you better. As it turns out, most often it makes the person doing the killing better. While suffering is not jsut important, but absolutely necessary, in order to learn Jiu-Jitsu, you need to actually test stuff out. That’s why BJJ blue belts are for.

First and foremost, this article is not intended to disrespect BJJ blue belts. And even if some feel like that after reading it, after getting their purple belt they will most certainly see things differently. That said, the blue belt is 100% the most important BJJ belt. It is by far the most desired one, as nobody likes to be a beginner. Yes, people do covet the blue belt much more than they do the black. However, the blue belt also holds a hidden role as well – it is the one belt that allows all the higher-ranked students to actually learn and understand Jiu-Jitsu. In other words, if you’re anything from purple above, spend a considerable amount of time rolling with blue belts. If you want to get better, of course.

BJJ Blue Belts Are Not Food – Or Are they?

As a blue belt, I took this statement personally, particularly when higher belts chewed me up and spit me out jsut so they could do it again. It wasn’t that I was suffering, that was (and still is) a welcome part of figuring Jiu-0Jitsu out. However, the statement was a bit annoying, at least to me. Until such a time, I got my purple belt.

Quite soon after promotion, I found my self referring to blue belts as food along with a great purple belt friend of mine. Suddenly, the joke didn’t seem so bad. However, it was only then that I realized it was nothing more than a joke. So yeah, purple belts deserve respect, as does anyone that steps on the mats. However, they also represent a crucial step in the hierarchy of learning BJJ. It is with blue belts that all higher belts get to develop their game, look to understand BJJ and grow as grapplers.

BJJ Blue belts are also more in numbers than any other belt out there. Currently, with BJJ spread all across the world, blue belts make up most of the people that train. That means you’re more likely to run into blue belt training partners anyway, particularly if you’re a purple belt or above. And that’s perfectly ok because you want most of your live rolling done exactly with them. In fact, you should spend at least 80% of your time rolling with BJJ blue belts.

Why Higher Ranked Students Should Roll With Blue Belts Often

There is a method behind this madness. If you think you’re just going to go about and “kill” BJJ blue belts because you’re a brown belt competitor, you’re mistaken. How many times has a blue belt given you the toughest roll of the night? The reason for that is that the learning curve is the biggest with BJJ blue belts. In the two years, people spend at blue belt, they go from being slightly more than a beginner to a purple belt. And, as the saying goes, a purple belt knows all the techniques a black belt does, all that’s lacking is experience. Things start making sense now, right?

What you get with BJJ blue belts is the chance to test out everything. People at blue belt know how to move in a Jiu-Jitsu specific way, but haven’t quite mastered the nuances. This makes them perfect for testing new things, getting to understand old things better, and learning how to combine everything. Blue belts are not white belts that will give up too, and they’re probably the most tenacious and hardheaded amongst the bunch. So, like it or not, you’ll have to learn patience and that is one of the most important lessons in BJJ.

Thre’s also another great aspect to rolling with blue belts – developing an offensive game. Blue belt is when everyone discovers defenses. Not so much escaping, as ways to defend and simply survive. That means rolling with blue belts, especially those that are more experienced will require you to figure ways out past solid defenses. And none of that busting through things nonsense will work. You need cunning, technique and tactics to catch a blue belt in a submission.

This is the fun part. Rolling with blue belts might seem boring if you’re looking for a challenge like brown and black belts present. But you’ll actually learn more from the BJJ blue belts than you will from those that are on your level or higher. The key rolling strategy here is going for things that are not yet clear to you. If you’re only using your A game against blue belts, you won’t really discover progress. instead, try to go beyond your A-game and see where things lead. Blue belts will give you enough resistance to make you work, but also provide you enough space to think and decide on your next move. The perfect balance that no other blet offers.

But there is more. It is not just the offense that has to work. it is defense as well. Here’s a radical idea – let blue belts get in positions like mount, back, submissions, etc. Make them work for it, of course, but let them attack. What better way to fine-tune every escape you might be working on, than with someone that can’t quite hold you las tight as your peers do? Of course, you’ll have to deal with the fact that you’ll tap out to blue belts. However, that’s something you need to be at peace with already.

Finally, think about going for something specific. Decide you’ll catch BJJ blue belts only with one choke, or armlock or leg locks. It is how I got to learn countless details on both heel hooks and the D’arce choke. And I keep on using all the blue belts I can get my hands on to test out new stuff and figure out why some of the stuff I do, works the way it does.

That said, this doesn’t mean you should only roll with blue belts. However, do try and make the bulk of your rolling rounds be with them. There is a lot to learn from blue belts and there are a lot of them out there, so don’t be shy!

Finally, a word of encouragement fro BJJ blue belts. One day, very soon, you’re going to get to the point where you yourself need blue blets in order to grow as a grappler. That day si much closer than you think. Until such a time, though, do your due diligence as a blue belt – keep your elbows close, be unsubmittable and roll with everyone that slaps and bumps with you. Remember that in a  short while, another blue belt will do the same for you. Let’s roll!