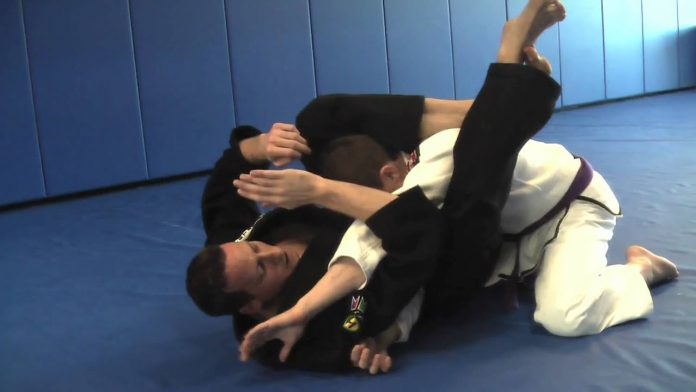 The usual order of things in BJJ is that you fight for a dominant position, acquire it, stabilize it, and go for a finish. A beyond than crude explanation, but true nonetheless. Well, sometimes, Jiu-Jitsu does not work like that. I mean, you could always look for the sequence above, as it is a proven and reliable one. But sometimes, submission options simply present themselves. Why not just take them and get a tap right there? the answer is, because most time,s those submissions aren’t really reliable. That’s correct, but, as always, there are exceptions. Like the inverted armbar for example – the most reliable and painful opportunistic submission you can get in Jiu-Jitsu.

The inverted armbar is something that mostly No-gi grapplers use, and even they go for it sparingly. The submission does seem like it is too rudimentary to work against high-level opponents. However, nothing can be further from the truth. The inverted armbar works just fine, all you need is to adjust your attitude towards it. If you think you can attack with this submission from a safe position and have all the time in the world, you’re not going to be successful. If you see it as a move that simply appears in certain moments and can work as blitz move, you’ll be much happier with the results. the inverted armbar goes completely against the “position before submission” philosophy. That is precisely why it works so well.

The Inverted armbar is the most forgotten armbar variation of them all. Apart from perhaps the hammerlock, which people do not do at all, the inverted armbar is the rarest arm attack in Jiu-Jitsu. Baffling, seeing as it is just as, if not more effective than other armlocks.

Generally, we divide armlocks into bent armlocks and straight armlocks. The bent armlocks are the Americana, Kimura, and Omoplata, along with every possible variation of them all. the straight armlock is usually restricted to the armbar, whether done from the mount or guard. The inverted armbar falls under the straight armbar category, but works, well, the other way around. The trick with it is that you do not have a safe spot to do it from, like the closed guard or mount.

The inverted armbar is a catch-wrestling style submission – catch it when and if you can. The thing is that if you know how and when you can actually bait opponents into it, rather than having to chase it around in a scramble. Think of it as a submission checkpoint.

How the Inverted Armbar Works

What exactly is the inverted armbar? In simple terms, it is a straight armbar, just done with your body on the opposite side of the arm, compared to the “standard” BJJ armbar, or Juji Gatame. It does seem a bit like an Aikido move at first, and even I wasn’t sold the first time I saw it. In fact, the first time it started working for me was a brown belt. That’s a lot of years behind where I could’ve set perfect submission traps but didn’t because of prejudice.

The inverted armbar works just like any other straight joint lock – by trapping the two joints on either side of the joint you’re actually attacking. The shoulder joint is the one you control with different parts of your body, depending on the variation. More on that later. The wrist is the end of the lever that you control with your head. You can’t let your opponent retract their arm so you use your head and your shoulder to trap the wrist. That leaves the elbow exposed for pressure.

The ways in which you exert pressure on the elbow are numerous. Usually, it is both your arms, with a Gable grip right behind the elbow, that provide breaking pressure. However, this can change between your entire forearm, and in certain cases, even your knees. The best part about the inverted armbar is that once you learn how to isolate the arm instantly, it is pretty much inescapable.

A great example is executing the inverted armbar fro the closed guard, by utilizing an overtook grip. Getting an overtook from the closed guard is not too hard. most people have trouble finishing, mostly because the elbow tends to sneak out. there’s an easy solution to that – you need the right angle first. A slight hip escape to the side of the arm you’re attacking, and inserting a knee shield between you and your opponent will do the trick. The key for the finish is t use your free arm to press the shoulder of the opponent back, and then lock a figure four grip with your arms. A simple twist of the wrists will get you a tap, let alone looking for direct elbow pressure.

The quintessential setup for both Gi and No-Gi though has to be the one from half guard. this one is the easiest, as it works off a bait. Every time someone is in top half guard they tend to look to establish a crossface and smash you. Let them. Placing a crossface means they place their arm in the perfect position for an inverted armbar. Just use your bottom arm to scoop the elbow, and proceed for the standard finish.

Another option would be to attack with the inverted armbar in transitions. Opportunities for the submission raise constantly, like for example, every time someone places an arm over your shoulder. In the modern game, people tend to do ti to avoid butterfly guard sweeps or try to float past leg lock entries. That simply means you let them down with your butterfly hooks, but trap the arm in the process. For the finish, you’ll need to angle out again, but it is not far at all.

The inverted armbar is a powerful weapon that lots of ultra high-level black belts use. Gordon Ryan and Marcelo Garcia are just a couple of examples who thrive of the move, mostly using it as a threat to set up other her moves. The beauty is in that you can use the move as a follow-up or even an alternative to most moves too. Al lit takes is for you to recognize the moments an arm is placed over your shoulder, and to figure out the grip adjustments. But you can only do that by trying, right? So what are you waiting for?