Talk about great timing! Well, for me, at least, but I doubt anyone in the grappling community is going to say no to a Gordon Ryan Passing DVD. For me, it comes at a perfect time because of a knee injury that prevents me from doing my go-to knee slice pass. So, as I’ll be revising some alternative positions, the “Systematically Attacking The Guard” Gordon Ryan DVD is hands down the top source to use. And yes, it is still being filmed as I’m writing this, but I’m no less excited about the upcoming Gordon Ryan DVD Review! After all, Gordon has passed the guard of some of the most fearsome grapplers of our generation. And he’s just getting started!

So far, the Danaher Death squad has been really active in the DVD instructionals scene. Both Gary Tonon and Eddie Cummings came out with leg lock instructionals of their own. Gordon Ryan did a strength and conditioning DVD not that long ago. And, of course, Danaher himself did a whole series of No-Gi DVDs and is now entering the realm of Gi instructionals. Now, Gordon is filming another DVD, but this time, it is all about one of the most important aspects of BJJ – guard passing. Furthermore, if all the other members of the Death Squad are anything to judge by, we’re in for a treat. Ryan is very well articulated and has immense knowledge of BJJ despite his young age. As I said, the perfect instructional at the perfect time! And we get to do a Gordon Ryan DVD review as soon as it is ready!

By now we all know who Gordon Ryan is, but let’s recap for a little. Gordon is a John Danaher black belt that’s training at Renzo Gracie’s New York City academy. He is actually a black belt under Gary Tonon, a close friend of his and DDS teammate. This also makes him a part of the Tom DeBlass lineage. On top of everything, he trains with John Danaher for hours on a daily basis, which is why he is all but unbeatable.

At only 23 years of age, Ryan is already a black belt, ADCC champion, No-Gi World champion at ultra heavyweight and absolute as well as multiple time EBI champion. The submission specialist with a record of 50 submissions in 62 wins at the black belt is exactly the guy you want demonstrating techniques in a DVD instructional. Just recently he destroyed everyone at the IBJJF No-Gi worlds, proving that he can be superior under any ruleset. And he is far from done. 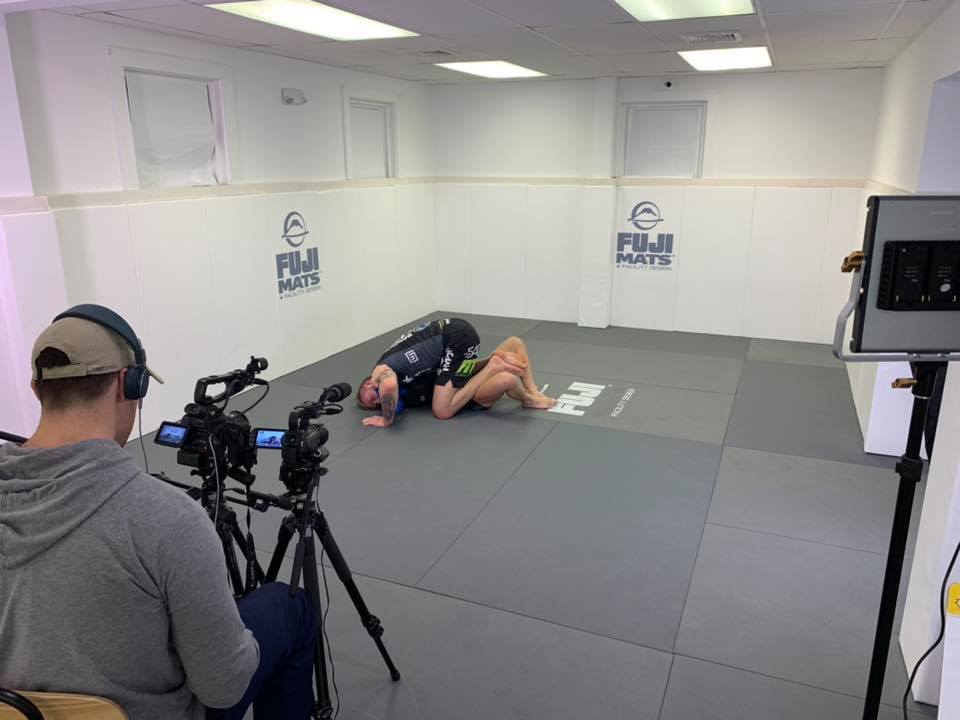 While Ryan is undisputed in the No-Gi game, he still has the Gi BJJ circuit to conquer. And he’s not one to back away from a challenge. Right after Ryan won the ADCC in 2017, he decided to start getting ready for Gi Jiu-Jitsu. Although he set 2019 as the year to prove his Gi dominance to the grappling world, he recently decided to actually transfer to MMA instead.  And, while we’re waiting for him to do what he does best, we can also learn from “The King”. After his first DVD, which is not exactly a BJJ instructional, I’m stoked about this Gordon Ryan DVD review even more than some of Danaher’s stuff!

It’s probably redundant to talk about expectations from a Gordon Ryan DVD, but still, let’s amuse ourselves. Until we get access to the material to do a Gordon Ryan DVD Review, we can speculate. With my fresh knee injury, I discovered that the knee slice will be unavailable to me for quite some time. So, when I turned to instructionals on a guard passing concept I found myself stuck. The moves that are available, like leg drags or pressure passes are clear to me, but what I am looking for is a concept-based passing system. Preferably, I’d like something that gives the option of a “position zero” to start from. 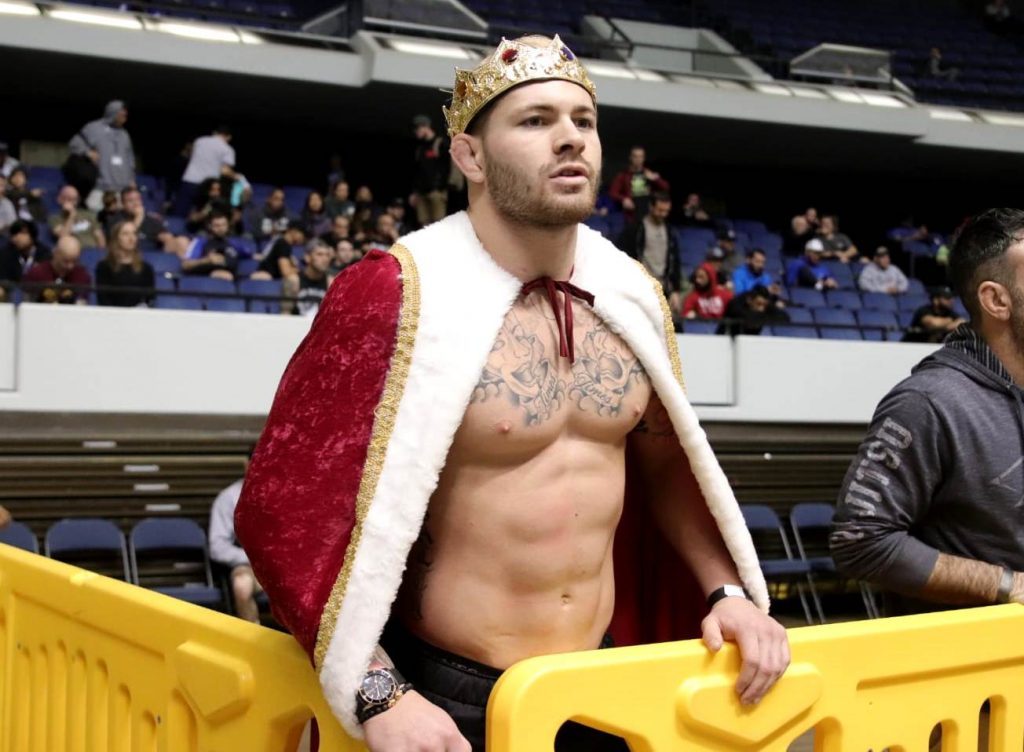 If we look at what Ryan does on a regular basis, it’s evident that this is exactly what we’ll get. While a lot of the DVD instructionals out there focus on specific passes, like Faria’s over under pressure passing style, none take into consideration multiple modalities of guard passing. Of course, Danaher is the man to put things together, but there’s nobody better than Gordon to demonstrate them. If you think about it, Gordon is like Danaher’s lab rat. He puts into practice what the evil BJJ mastermind puts together in the blue basement of RGA. In that sense, we can expect a system as complete as Ryan is well rounded at grappling!

So far we know that Ryan likes to pass mostly from standing. Yet, there are also instances of him passing from the knees, which indicates he’s comfortable everywhere. Moreover, Ryan has a specific style of passing that’s neither speed nor pressure passing specifically. If this is anything to judge by, the upcoming Gordon Ryan passing DVD is going to have it all. The expectations are an overall system that’s not based on a single guard passing approach. Plus, at over 8 hours of material, be ready for a wealth of information like never before!

So far, we know Ryan can pass the guard. We also know there’s a Gordon Ryan Passing DVD in the works, expected to come out as early as this month. Finally, we know we can expect an in-depth system running at an excess of 8 hours. That is a lot of material to go through and it is going to be groundbreaking without a doubt. make sure you watch this space as we’ll provide you with a complete Gordon Ryan DVD review as soon as it comes out and certainly before anyone else does!

As promised, we got our hands on this before it is even available for purchase. still, you’ll only have to wait a few more additional hours until you can get it for yourself! Well, only a few hours if you get the digital version, and probably a couple of days more if you order the actual DVDs. I thoroughly enjoyed every minute of this instructional while doing the Gordon Ryan DVD review, and I’m certain you will too.

In the style of his teacher and mentor, Ryan delivered an 8 volume DVD set that pretty much covers everything in regard to passing the guard. It has two parts to it, each with 4 volumes of immaculate instructions. It turns out that Ryan is just as good a teacher as he is a competitor. Taking into account his age, he’s probably going to be Jedi knight level when he gets to Danaher’s age.

In technical terms, this DVD is flawless. No issues with sound, video or content organization. Ryan uses his girlfriend and conditioning coach as his Uke. They have a great understanding of each other so there are no stops during demonstrations. Moreover, Ryan likes to explain a lot of the details. This means you get long chapters with very thorough instructions. And, you get so many passes!

The first volume of this DVD starts with an intro, pretty much as expected. Gordon goes over his (and Danaher’s) guard passing philosophy and principles. During this Gordon Ryan DVD review, we got to go back and re-listen to it many times. It is that important, so pay close attention! Gordon Ryan DVD Review

After the intro, it’s down to business, with the closed guard as the first problem of the day. The solutions Ryan offers are simple, basic and one you haven’t thought of. In order to skip repeating this, everything Ryan goes over works both in Gi and No-Gi. That aside, the real gem here is his take on defeating the Rubber guard. No more trouble when going against those ultra-flexible grapplers!

After the closed guard, Ryan moves on to passing open guards. A rolling Kimura is his solution to the seated guard before he dedicates some attention to the Reverse De La Riva. Here, he demonstrates how to kill the entire guard with very simple detail. next, he shows you how to enter Ashi Garami which results in either a pass or a leg lock. There’s also a “cure” for those that like to invert.

The final chapter of this volume is actually something the I found reoccurs a lot during the Gordon Ryan DVD review. It is the ‘split squat” concept, something that pretty much defines a lot of Ryan’s passing efforts.

The spit squats kick the second volume off, this time as a solution to the lasso guard. While the lasso isn’t a guard people play regularly in No-Gi, the principles apply to Gi as well. And it is going to be a game-changer if this guard is a sticking point for you. The split squat Ryan talks about is kind of a position zero for most of his passes. As far as dealing with open guards goes, the backstep is Ryan’s favorite route. He shows a bunch of variations, throwing in a guillotine finish of the pass for good measure.

Further, in this volume, Ryan focuses on the knee shied. He has two main modalities of passing it – a low passing system and a high one. Both work perfectly an all you need to do is recognize which to use given the circumstances. It is all covered in great detail as Ryan offers about 10 different options to pass the knee shield. The cross shoulder post is one that deserves special attention, as it completely pins your opponent. As per usual, submissions feature along with guard passes, this time of the D’arce choke variety.

When doing this Gordon Ryan DVD review, the first break I had to take was at this point. there is so much key information that you need 100% focus to just get through it once. It’s all going to be worth it, though, as stuff from this disc starts working in training right away!

In this part of the instructional, Ryan’s attention switches to passing common half guard varieties. He starts with the bodylock pass that is a big favorite at Renzo’s NYC Academy. From there, it’s over-under pass time, one of the most coveted and high-percentage passes. However, Ryan’s take on it is different from everyone, including Bernardo Faria who is notorious for it. A kneebar finish rounds of the over-under pass portion.

The final third of the volume is all about the deep half. This is one of the guards that can really frustrate people. Dealing with it is much harder than it looks unless you’re using Ryan’s system. As usual, some basic concepts are followed by a few passing options. Some are familiar, while others are unorthodox. All of them work, though, without a doubt! Passing varieties include dealing with the Z guard, underhooks and even the dreaded lockdown.

DVD 4 – A Masterclass On Killing The Half Butterfly

Halfway through the DVD, Ryan is still on the subject of half guard. The fourth volume covers one of the more modern guard variations, and certainly a difficult one to pass. It is a guard people use a lot lately, especially in conjunction with leg locks. So, Ryan gives it the respect it deserves by dedicating an entire volume to killing it off.

Going back to what I mentioned is going to reoccur during this Gordon Ryan DVD review is the utterly critical concept of the split squat. Once again, Ryan uses his split squat system to first stabilize, then neutralize and finally, pass the half-butterfly guard. Some of the caveats here include using guillotines to deal with the half-butterfly, as well as the cross shoulder post I highlighted previously.

Khabib Nurmagomedov: There are Great Differences Between Dagestan and American Wrestling