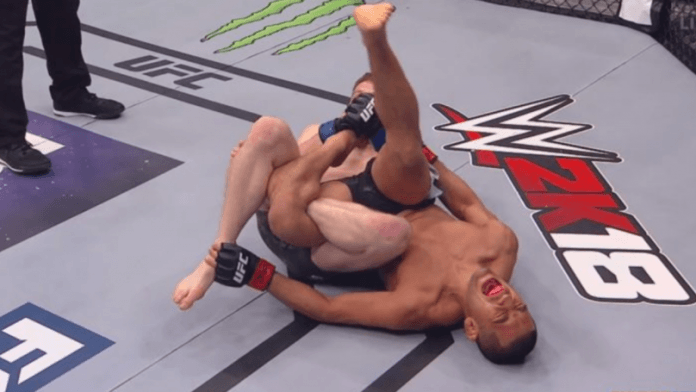 Calf Slicer submission or so-called Calf Crusher is a submission that is as underrated as it is scary! It’s a compression lock that is pressing calf muscle to a shin bone. You can see this submission in BJJ, MMA, and most Grappling Martial Arts. What’s important are the reasons to make Calf Slicer your best leg lock that people will have no idea how to defend.

The ultimate goal of the art of Brazilian Jiu-Jitsu is to cause an opponent to surrender. The best way to force someone to give in is through a submission hold. Among the many submissions in BJJ, there are some that stand out. There are different reasons for standing out. Some are incredibly effective across all competitive platforms, some are entertaining, and some are pure brutal. It is those that are both effective and painful that rule them all. Twisting neck cranks, heel hooks, Calf Slicers or usually called Calf Crushers are among the scariest submission holds in grappling martial arts.

The reason why Calf Slicer is so underrated

The reason why Calf Slicer is so underrated
One of the reasons why the Calf Slicer is so severely underrated is its legal status. Within IBJJF rules, this submission is permitted only for brown and black belts. This relative lack of exposure means it is not among the ‘everyday’ moves practiced in BJJ academies, especially in GI schools. In No-Gi schools, instructors are showing this painful finisher a bit more but always comes in second to heel hooks and ankle locks. And, if you’ve seen the EBI (15), you’ll know how effective and devastating it can be!

The Mechanism Behind The Calf Slicer

It is a compression lock that involves pressing the opponent’s calf muscle into one of the bones in your shin. As the name implies, it is very much like the biceps slicer submission, only done at the level of the knee.

The mechanism behind the calf slicer is in the leverage that you create by wedging your shin bone behind the knee of your opponent. You can also do it with the forearm instead of the shin, but it’s not as tight or powerful that way. The submission comes on by flexing the opponent’s leg to apply pressure. To clarify, flexion means pulling the foot of the opponent towards their hamstring. The pressure is mainly on the muscles surrounding the fulcrum, the precise point defined by the angle of the lever. In terms of mechanical principles, the calf slicer is a nutcracker. Squeezing it hard enough is going to cause a break at its weakest point – the joint. The damage is focused, but not limited, to the tibia or fibula, or, more likely, the muscles, ligaments, and tendons of the knee.

Slicers of any kind can cause an extreme amount of pain that you feel almost instantly. The pain feels precise as the name suggests. It can feel like a slicing or a crushing pressure to your calf. If a person tries to be tough and not tap, walking afterward is going to be challenging. And not for a short time.

How to Get To The Calf Slicer

There are many variations, entrances and ways to set them up. They are a great option to hunt for directly. However, fighters are using it more as a plan B to other leg locks. The good thing about this finisher is that you can hit it from a bunch of BJJ positions.

Let’s look at the primary points of setting a slicer up.  As opposed to most leg locks, you need to be behind your opponent for the submission to work. You can reach it from most of the Ashi Garami positions favorite today, but you cannot set it up from any one of them. You can look at it as a transitional stop between two Ashi Garami positions.

To get into the position, you need to be facing the posterior chain of your opponent’s legs. Regardless of top or bottom position, the idea is to place your shin across their calf, with your foot in between the opponent’s legs. The next significant step is to cause a bend in the knee, forcing flexion in their leg. To make sure you control your opponent, you also need to stop their hips from moving, which is where your arms come into play. Triangleing your legs are going to keep things tights. For a finish, you either push their leg toward them or pull it towards you. It all depends on where you’re attacking.

Calf Crusher is a high attack to go for if you have an opponent that is continuously able to get you into their half guard. From top half guard, you need to be able to pull your knee out just a bit. Next, you’ll need to roll over the shoulder. Keep in mind that we’re talking about the shoulder joint that is on the same side of the leg that you have behind his knee.  The roll is a Granby roll variation. From there, you’re in the truck position.

The truck is an exceptionally dynamic position from the 10th Planet system. After the roll, you can finish the Calf Slicer in different ways. One is to triangle your legs and pulls down on your opponent’s instep. Another is to press on the heel of your intertwined leg with your free leg, all that while controlling the opposite leg. For both, you need to pull down towards you to finish.

Slicer Crushing From Your Back

A very sneaky, but effective way to get to the calf slicer is from the X-guard. Once there, you need to off-balance your opponent so that you can elevate them off the ground. When you do, your foot that is on his hip is going to transition underneath the leg that is off the ground. From there, all you need to do is triangle your legs, and establish a grip around their waist. The Gable grip is the preferred option. It all ends with you raising your hips and pulling down to cause the pain and get the tap.

How to Defend and Counter Calf Slicer

Some people won’t tap to it no matter how painful it is to them. The chances are you’re not among those people, so it’s essential for you to learn how to defend it and escape from this submission.

You have to be aware of the situation when your opponent is trying to put his shin behind your knee. Especially be aware of cases when they’re connecting their legs to yours and trying to roll in the opposite direction.

While there are many positions, we’ll take one example that you’ll find yourself most of the time. It’s a Slicer from the truck position. Defense looks pretty easy, but once you try it, you’ll notice that switching angles can be a pretty hard thing to accomplish. There are few ways of changing angles when you’re caught in Calf Crusher from the truck position. Check out the video below to see an example of Truck Calf Slicer Escape, Defense, and a Counter.

Here is one example of a great application of this very painful submission in MMA. The 24-year-old UFC fighter Brett Johns submitted his opponent Joe Soto in less than 30 seconds. He was able to do it while he was defending the single-leg takedown. What Brett did was that from the crotch lift he rolled onto his back while having his opponent’s leg entangled by his leg. After that, he immediately caught Soto’s leg to be able to submit him. Soto had no choice but to tap.

If you look at this video, you can see that Brett made a mistake because he was holding Soto’s leg with both hands. If Soto managed to pull Brett’s arm, he would be able to submit him with an armbar. But, as people usually don’t know how to defend this submission or counter it, this was an easy tap.

So, Should You Practice Calf Slicer or Not?

While it is pretty more laborious to get slicer than other standard leg attacks that do not mean that you should not practice them you should practice and master them and have that be a part of your leg lock game. They come in handy, and many people do not spend time on calf slicer defense. That means that you can get more taps from this pain-inducing submission.