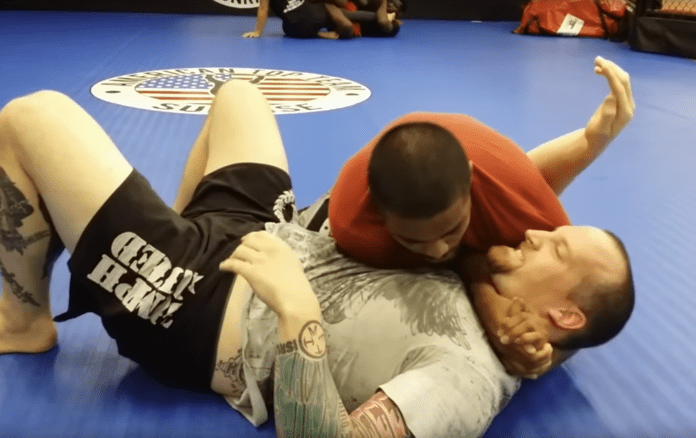 One of the most fun and efficient chokes you can do in BJJ is the Baseball bat choke. It is predominantly a Gi choke, involving either the collar or lapel. It works for two main reasons – sneakiness and superior mechanics. Each of these on its own will make a BJJ move high percentage, but both together are behind some of the nastiest submissions in the sport. The standing No-Gi baseball bat choke is a version of the baseball that takes the sneakiness factor through the roof! Read on.

It is always great when you surprise people with BJJ moves. The squirrel lock is my favorite example – they think they have you in side control and you do a Kimura lock with your legs that they do not expect at all. The baseball bat choke works similarly, from both side control, half guard bottom, and even the closed guard. It is even sneakier, in fact, because you let the top person think they are passing when they’re actually going deep inside a trap that will end up with the good old tap or nap!

The baseball bat choke is really a thing of beauty. It involves many BJJ principles which is why it works so good, on the mechanical side of things. Speaking of mechanical, I mentioned that the main reasons behind the choke’s proficiency are mechanical superiority and sneakiness. let’s look at both, as well as the slight difference between the Gi and No-Gi setup of this choke.

In mechanical terms, the baseball bat choke involves pressure on the neck via the forearms of both your arms, which means there’s really no leeway if you set it all up correctly. Another huge mechanical advantage is the anchors of your arms, which are usually in the gi, be it the collar or the lapels, or a combination of both.

To get the choke, usually from knee on belly, you slide the far arm into the collar, grabbing with four fingers in. The goal is to do the same on the other side but grab with a thumb-in grip.  The goal from m here is to go to north-south.  The arms, holding on like you would a baseball abt will get crossed in the process, delivering a panic-inducing choke in the process.

The sneakiness factor comes in when you’re on the bottom. Imagine how easy it is to establish the baseball bat choke grips from bottom side control, or even closed guard. All you need to do is turn away from the opponent and you’ll have them tapping or sleeping on top of you. 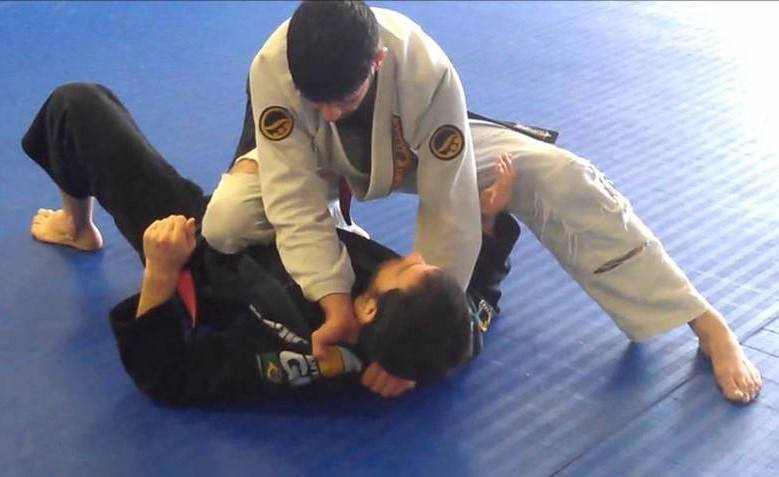 The baseball bat choke will work in No-Gi as well, but it will require a grip change (obviously) that takes some getting used to. The one drawback about this choke is that it works better for people with longer limbs. namely, the grip is a bit strange, as you need to go for an S-grip kind of configuration behind the opponent’s neck in order to get the baseball bat choke mechanics without a Gi. It still works like a charm, though, even if you decide to set it up from standing, which is a whole new level of sneakiness.

Speaking of the standing No-Gi baseball, let’s take a look at three main reasons why it will work for everyone.

Setting the baseball bat choke up from standing is better done in No-Gi than with the Gi simply because you can sneak in the grips easily. Gi grips usually make people wary, and they try to break them, especially if they are different than the usual one s ( which, in the baseball bat chokes case, are). So, the fact that you’re No-Gi increases your chances of setting the choke up from the get-go

Next, you work from that clinch, which is basically halfway to the choke. If, or better said, when you get a double collar tie, you’re all set to go for a No-Gi baseball choke. Staying in the double collar tie clinch will give you control, and if you threaten a couple of dropdowns along the way, you’ll be able to get the choke effortlessly.

Here is where things get interesting. As mentioned, the No-Gi version of the baseball bat choke has a slightly specific grip. Getting it from standing, though, is much easier compared to getting it on the ground, whether it is top or bottom. The double collar tie pretty much guarantees you’ve got enough depth to establish the grip regardless of the length of your arms, which is both a mechanical and sneaky advantage of this particular setup.

The one thing that will happen with the standing No-Gi baseball bat choke is that you will end up being the person on the bottom. If you’re intending to use it as a takedown, you’re better off trying something else. However, the fact that you get an easy setup (clinch and grip) means that you get the element of surprise by dropping to the ground and twisting away from your opponent.

The one thing to keep in mind is not to give mount away. In fact, going for a half guard / deep half guard follow-up, wi your best bet of managing the risk of the choke not working, or you messing something up along the way. Take e a look at the video below to see what I mean.

In essence, going for chokes from standing is quite an unusual way of attacking in BJJ. That means that whatever you do, will work, given that you have realistic expectation s out of the exchange, What I mean by that is that not many people expect you to choke them from standing for a good reason – not many standing chokes work. However, they will help open up other attacks for you, whether it is attacking the back, or looking for takedowns.

If you are dead set on submitting someone with a standing coke, understand this – the setup can be standing but the actual finish is much more reliable on the ground. So whether it is a baseball bat choke (Gi or No-Gi) or any other choke attempt you do, setting it up standing is a great idea. If you want to finish it, though, you better make sure you figure out a way to get the fight to the ground.

The standing No-Gi baseball bat choke is a great thing to surprise anyone with. It will work for you if you understand the mechanics and sneakiness behind it. And, no, the length of your arms won’t matter, especially in the standing setup, given the reach that the double collar tie secures. have fun with this one!