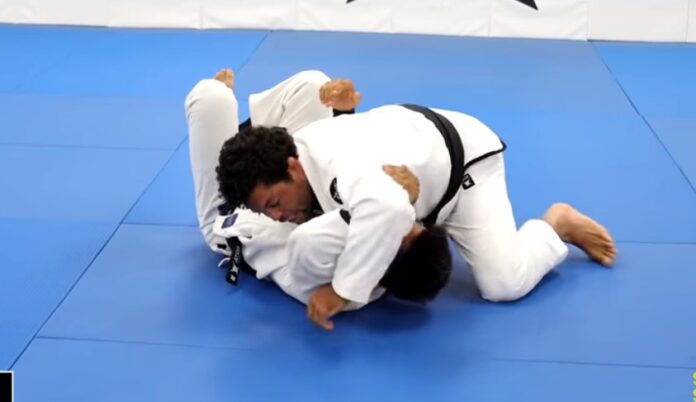 Choking people with the Gi can be difficult since the grips often g I’ve it away. As effective as the cross collar choke is unless you’ve put in the time Roger Gracie has in perfecting it, your grips are going to give you away and people will defend it. That leaves Gi chokes with not-so-obvious, sneaky grip setups as much more potent options, chokes like the bread cutter choke.

The brad cutter choke version that most people know is done from side control, taking advantage of the bottom person sneaking the near side arm between you and themself. This can lead to sneaky ghost escape and Darce for the bottom person unless the top person exploits the opening to get an essential grip that will ultimately lead to a bread cutter BJJ choke.

The grip in question is a back-of-the-collar grip, with your far arm going underneath the armpit of the opponent, trapping the arm they placed in between you and them in the process. This is the anchor grip that will allow you to both hold your opponent in place, and tighten the collar for the choke.

Your other arm goes with the forearm across the opponent’s neck, gripping the opposite side collar with a thumb-in grip. Finishing the choke requires you to place the elbow of the arm going across the throat to the mats (hence the name bread cutter), and point it toward the opponent’s ear. Sprawling and tilting your torso so that it is facing the opponent’s face helps wrap the choke up.

There are people that are so good with this submission that they’ve built a bread cutter game that is extremely difficult to deal with and prevent. The variations in gripping and setting this choke up offer many options, making it effective due to said unpredictability and the easy setup that requires very little motion.

4 Variations To Improve The Bread Cutter Side Control Choke

The above-described version of the brad cutter choke is going to work, and you will be able to get the grips in before the bottom person gets a grasp of what is going on However, there are defenses that can get the bottom person out, both at an early and late stage of the submission threat.

If you are really a fan of the choke, though, you won’t have to accept defeat there. There are several variations of the bread cutter that will work like a charm, surprising even the most skilled opponents.

This is an old-school variation that has been proven to block all sorts of bread cutter escapes and is brought to you by BJJ legend Pedro Sauer.

It involves a slightly different grip with the anchor arm (the one that usually grips the back of the collar). Instead of getting this grip first at the usual anchor point, Sauer likes to get the choking arm in place first. He then sneaks the anchor arm underneath the armpit but grabs the biceps of his other arm (like for a rear-naked choke) rather than going for the back of the collar.

This both amplifies the power of the choke, and puts lots of pressure on the shoulder, making escapes really difficult to perform.

This one is similar to the Pedro Sauer variation but does not require gripping your own biceps. Instead, it works by sneaking in the setup of the bread cutter choke from a reverse Kesa Gatame side control variation.

The setup begins when you place your far side arm underneath the opponent’s armpit on the far side. You can then sneak this arm around, palm up, to grab the far side shoulder, or preferably, the collar on the far side. Unlike the basic version of the choke, you don’t have to go deep and grab the back of the collar.

From a position like this, you’re clear to get the thumbs in grip as well without the opponent being any the wiser about what you’re planning to do. When you’re ready to choke, you’re just going to move your body to the opposite side, going over their head and the choke is going to sink in super tight.

This one is going to catch even those that are good at defending the bread cutter choke by surprise. It is a version that does not require control over the near side arm/shoulder, and as such is super easy and quick to set up.

This one also works with setting up the choking arm first. Once that is in place, you won’t have to chase the shoulder, but rather sneak the free arm over the opponent’s chest and grip the collar on the opposite side of the choking arm, using four fingers on the inside.

It is essentially a cross-collar bread cutter choke hybrid that works incredibly well.

Finally, let’s see a switch in position in terms of top and bottom, and how you can really take people by surprise by setting up the brad cutter choke from the bottom.

The brad cutter from the bottom works with a finishing grip configuration rally similar to the Pedro Sauer variation. The choking arm goes across the throat, just like hen setting u the choke from the top.

You want your other arm to sneak in under the opponent’s armpit, which usually is not a problem as they won’t mind it being there, thinking they have the upper hand. Your end goal is not to grab the back of the collar but go over their shoulder, grabbing the biceps for a rear-naked choke grip.

Finishing the choke will require you to shovel under the opponent, moving your legs toward the top person’s.

Dealing with the brad cutter, as you can see, is no easy feat. If people know different variations of the brad cutter game, you’re in for a long roll/match. However, there re some things you can do, at various stages of the choke setup, which can help you defend, escape or even get a submission counter if you time it just right.

The elbow push is a bread cutter defense that is going to work before the opponent sets up in a choking position. It works when the choking arm is in place, so it is not an early escape, but there is a point of no return – when their elbow drops below your shoulder.

The escape si quite easy – grab the elbow of the choking arm with your near side arm (it is free anyway) and use it to push the opponent’s elbow across your chest and towards the ceiling, This will not only get you out of the brad cutter BJJ choke but also out of side control.

The armbar counter works early when you eel the opponent setting up the choke by grabbing the anchor grip on the back of your collar. This counter won’t work after they’ve sprawled, so it is even more dependent on correct timing than the elbow push escape.

In the best-case scenario you get an armbar from her, and worst case you’re out of the choke.

This one works fairly late during the choke and is extremely effective. The key moment is not panicking and allowing the person to try and finish the choke so that you can move your head.

You want to use your far side arm to grab the far side of the opponent’s head and pull so that you force their ear to their shoulder on the near side. This opens up space for you to pass your head by theirs/ The way you accomplish this is by grabbing behind their shoulder with the near side arm (one in between you and them) so that you can arm drag yourself up and away from the choke. 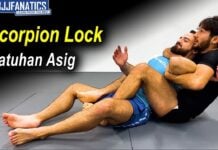