Brazilian Jiu-Jitsu is most likely the one martial art that relies on the use of rashguards more than any other. You don’t really see many Judokas or Sambo fighters in the latest colorful rashguard and spats combo, do you? Wrestlers too are very much content to grapple in a T-shirt and a pair of shorts. However, when it comes to training Jiu-Jitsu a rashguard is not just for show. Gi or No-Gi, wearing a rashguard is, well, a must. Understandably, such a demand has created a huge supply, with lots of options. This, in turn, brings about the issue of quality. In order to help you get a rashguard that’s fit for grappling, today we take a look at an Under Armour BJJ Rashguard.

Let’s face it, we’re all suckers for an Under Armour BJJ rashguard. Ever since MMA fighters made them popular during feature pre-fight videos, Under Armour has been one of those brands that are considered classics. After all, they’ve actually been in the rashguard business for decades now. That said, modern “rashguard fashion” tends to promote more colorful rashguards featuring all kinds of sublimated art. Under Armour tends to stick to a simple, yet powerful design. Still, what the Under Armour rashguards “sacrifice” in terms of artistic look, they more than makeup for in performance and quality. If you ask me, I’d opt for an Under Armour over any other brand every time!

The trend of wearing rashguards during grappling is a fairly new one. That said, Brazilian Jiu-Jitsu is a fairly new martial art as well. Still, the original method of training was, and still overwhelmingly is, with the BJJ Gi. In Brazil, people used to train with Gis, or simply in their Gi pants when the weather got really hot. Then, somehow, rashguards weaseled their way in amongst grapplers. As far as I am concerned, it is all a result of that ever-present surfing-BJJ relationship.

Today, apart from trying (and often failing) to look cool, we use rashguards for a myriad of practical reasons. One such reason is protection. When you hear a rashguard in No-Gi, you obviously get protection from both contacts with others and contact the ground. Moreover, when you have a Gi on, you extend that protection to the Gi, by reducing the amount of moisture it is exposed to. Then, there is the most obvious thing – rash prevention. Given how BJJ training takes place, this one is arguably the most important one.

There are a bunch of other reasons for wearing a rashguard when you grapple. However, wearing an Under Armour BJJ rashguard does not only provide all of the benefits, but it is also a different class to most other rashguards. particularly if you are a fan of low-key high-performance pieces.

Under Armour is without a doubt the leading brand when it comes to rashguards. To be fair, they do have a very wide range of sports leisurewear and training apparel. However, they’re most famous for their running shoes and their rashguards. A lot of that is down to MMA, with early stars of the sport like GSP promoting the brand. Before that, it was all surfers and divers that endorsed Under Armour rashguards. Now, BJJ is taking over that particular mantle. 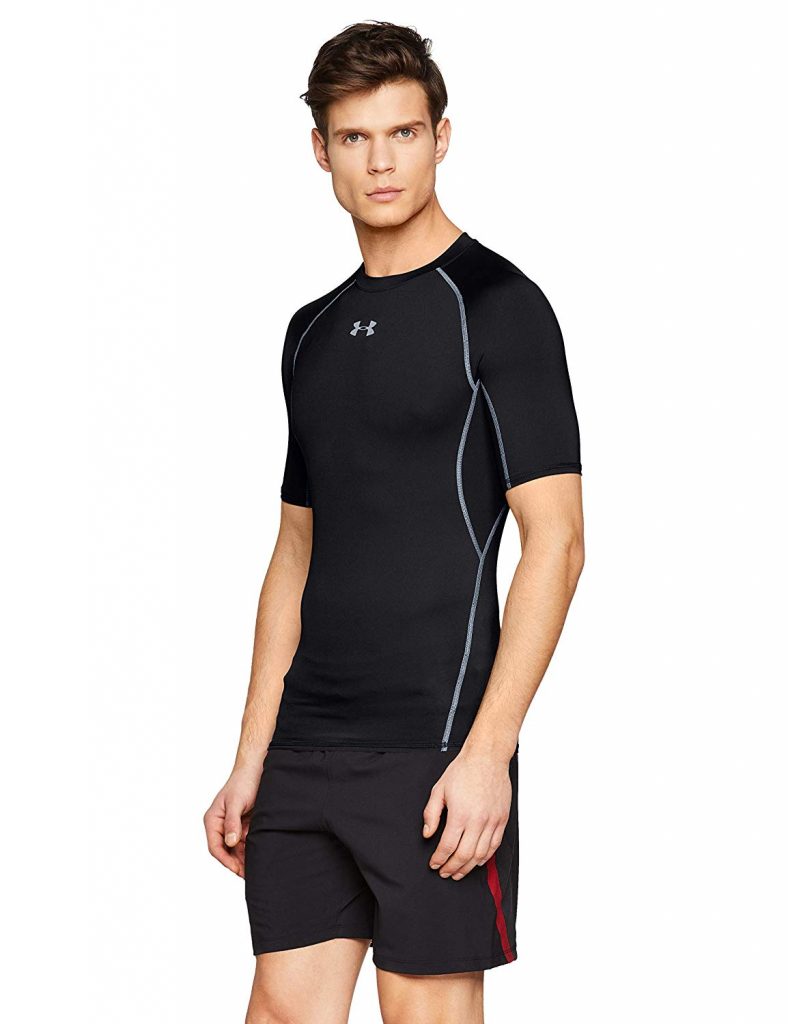 The Under Armour BJJ rashguard options are plenty. They come in all shapes and sizes. For BJJ, it is always good to have so many choices. With Under Armour, you get virtually everything you need. They have short, long-sleeved, and even sleeveless options. Furthermore, they have a huge amount of sizes and a bunch of colors. Plus, they offer men’s and women’s models as well. The area even kids’ sizes and models included. Still, even amongst all of their rashguards, certain models for the needs of Brazilian Jiu-Jitsu much more than others.

To be frank, there’s one in particular that I’m really biased for. Having worn both long as short sleeve variations of it, I can really attest to its properties first hand. For someone looking to get a high-quality, long-lasting rashguard for Jiu-Jitsu training, options do not get better than the Under Armor Heat Gear series rashguards.

The Under Armor Heat Gear Rashguard

The Under Armour Heat Gear series is Under Armour’s most prominent compression gear series. It is one of the most iconic rashguard designs of all time, fit for just about any physical activity, from diving to fighting. In all fairness, the Heat Gear is not a specific Under Armour BJJ Rashguard. however, if there’s any other rashguard that’s tailor-made for grapplers, I haven’t heard about it And I don’t mean they hype, but rather the feedback of people that have actually worn it.

From a BJJ rashguard, we have several major expectations. First of all, we need several qualities that are down to the material. Those are rash prevention, protection from germs, thermal effects as well as moisture management. Next up is how the rashguard feels and fits. In BJJ we need unrestricted movement while also getting the most out of the rashguard’s other properties. This makes it quite challenging for most brands to nail the perfect BJJ rashguard.

Of course, we need to also take a look into account. While anything might fly under a Gi, in No-Gi style is also important. This Under Armour BJJ rashguard luckily delivers on both style and performance. Speaking of performance, the rashguard has to be able to withstand grinding, stretching, and everything else that comes associated with Jiu-Jitsu. Moreover, it needs to be easy to wash, quick-drying, and able to go through all of the above dailies. This makes longevity a really important property. Finally, there’s the cost of it all. There’s no point in wearing a rashguard that looks cool, doesn’t perform, and costs more than your Gi, like certain options out there.

The material of the Heat Gear Under Armour BJJ rashguard is extremely thin. Despite seeming like it would give way, it is extremely durable. The fact that it is so thought highly amplifies the rashguard’s performance qualities. But more on that later.

The material this rashguard is made of is the original copyright Under Armour blend. It is known as HeatGear fabric, hence the series name. The rashguard actually has two parts to it – a “body” and mesh panels. The material of the “body” is a mixture of  90% Polyester and 10% Elastane. Furthermore, the mesh panels are made of the same combinations, but this time featuring 88% polyester and 22 % elastane. For BJJ, this is another key characteristic.

The Under Armour Heat Gear rashguard, long or short-sleeved is one of the most comfortable rashguards I’ve ever had. The fact that it is so thin makes it perfect, as it feels like you’re wearing nothing at all. Moreover, it has a very high flexibility rate, able to stretch in four directions. This means the movement is completely unrestricted, both when you’re wearing it for No-Gi, or as a base layer under the Gi.

Another important aspect of the feel department is thermoregulation. Namely, the heat Gear claims to have the ability to cool you off while you train, thanks to the way it spreads out moisture. Well, this claim is true and you’ll certainly never feel hot or suffocating in this rashguard.

In terms of fi, this Unde Armour BJJ rashguard is a tight-fitting one. Even amongst rashguards, the Heat Gear feels a bit tight. This is, of course, a positive for Jiu-Jitsu. It is not tight in the sense that it compresses too hard or prevents movement, but rather in completely conforming to your body. This means it has a very comfortable fit. It also has a reinforced bottom seam, meaning it will never come up as you train. Finally, even though it fits tight, it is really easy to take off, even after working out for hours.

Available sizes include everything ranging from Xs to 5 XL. 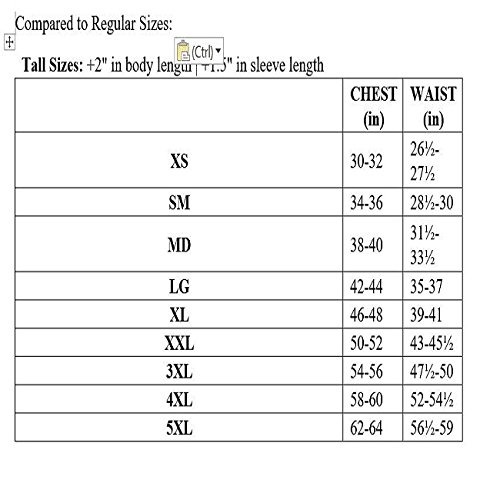 In terms of look, the Heat Gear screams simplicity and minimalism. First of all, it comes in a bunch of colors, more than two dozen of them. It is always a plain colored rashguard, with only the reinforced seems as a decoration in addition to a small Under Armour logo upfront. The seems are either black or grey. The rashguard comes in a long-sleeved, short-sleeved, and sleeveless version. For BJJ I recommend the long, and if you prefer it, the short-sleeved ones.

This is a key component of any rashguard. What can you expect from the Heat Gear Under Armour BJJ Rashguard? Well, first of all, it’ll last. And by that, I mean years. It doesn’t matter if you use it for Gi, No-Gi, or both, this rashguard is one tough piece of gear. Moreover, it provides flawless protection against anything. It is not only germ-resistant against both bacteria and fungi but is also not odor resistant which is often a problem with rashguards. When you roll with multiple people during class, this becomes really important.

In addition to protection and moisture management, the rashguard also provides compression. This means that it helps blood flow, and consequently performance. Furthermore, training in a compression shirt also boosts the muscle’s abilities to recover. Finally, the combination of materials ensures that this rashguard can stretch in pretty much any direction you need it to. Not only that but stretching means it is completely resistant to tears.

Oh, and not that it matters much to grapplers, but this rashguard provides 30+ UV protection.

Yeah, this one can really become a hassle. Do you know all those sublimated art rashguards? Well, they’re usually not washing machine friendly, given all the artwork. Washing them on hand, after each training session is not something you want. Particularly not if you train every day. The Heat Gear, on the other hand, is completely hassle-free. The only thing you need to watch out for with it is that you wash it according to the general color mixing rules. Oh, and it dries fast. And I mean, really really fast!

This is a portion of reviews that people often tend to look at first. In this case, it won’t make a difference even if you look at it first. The Heat Gear Under Armour BJJ Rashguard has an unbelievable price. For the most part, people opt for them precisely because of this and end up positively surprised with the quality they get. let me put it simply – you can get enough pairs of rashguards to cover all your weekly sessions and you still won’t reach the price of one of those modern rashguards that pop up all over the place. Think about that next time you opt to get yourself a new BJJ rashguard. 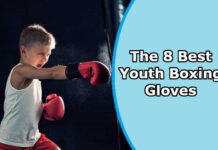 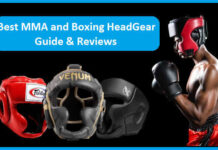 The Best MMA and Boxing Headgear in 2021