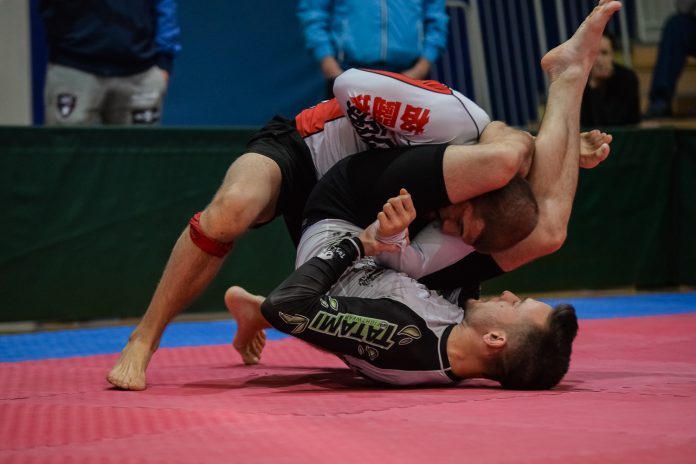 Defending BJJ submissions and successfully escaping them is arguably the hardest part of Jiu-Jitsu. It takes a lot of patience and knowledge to get out of deep submission, but it is, by all means, possible. There’s no submission in grappling that you cannot defend against. The only thing that makes all the difference in the world is timing. If you know what’s about to happen, you can work to prevent it or disrupt it. Once you manage that you can just sit back and wait for the opponent to give up. or better, yet, you can go on a counteroffensive yourself. Today, we look at three very high-percentage triangle choke defense options.

The triangle choke is not an easy submission to defend against. It offers a lot of control over you and allows for multiple adjustments. This makes it a potent weapon across all belt levels. Actually, apart from the Rear Naked Choke and Armbar, it is the one submission in BJJ that works universally from white to black belt with a high degree of success. In order to mount a successful triangle choke defense, you need to know what you’re defending against. Even more importantly, you need to know which defense you need to use at a particular moment of the submission.

As with most other submissions, the best triangle choke defense is prevention. However, triangles are a favorite tool of many high-level grapples, meaning you’ll get stuck in one sooner or later. When that happens you need to know that you have three checkpoints before the point of no return. If you fail by then, your options get simpler. You can either use the best escape of them all – tap or you can go to sleep. In order to be able to recognize the points of defense, you’ll need to know a few basic things about the choke first.

The unsubmittable man in Brazilian Jiu-Jitsu, Tom DeBlass can help you get out of any tight spot in BJJ, including triangles. How? The simplest way is to pick up his “Submission Escapes” DVD set and start going volume by volume. You’ll not only learn triangle escapes but solutions to any submission that might be troubling you!

If we’re being obvious, the main threat with a triangle choke is the pressure on both your carotid arteries in the neck. The triangle choke is a blood choke, involving your own shoulder on one side and the thigh of an opponent’s leg on the other. If you’re there, with one arm across their body and no posture, the time for a triangle choke defense is long gone. Tap and restart. 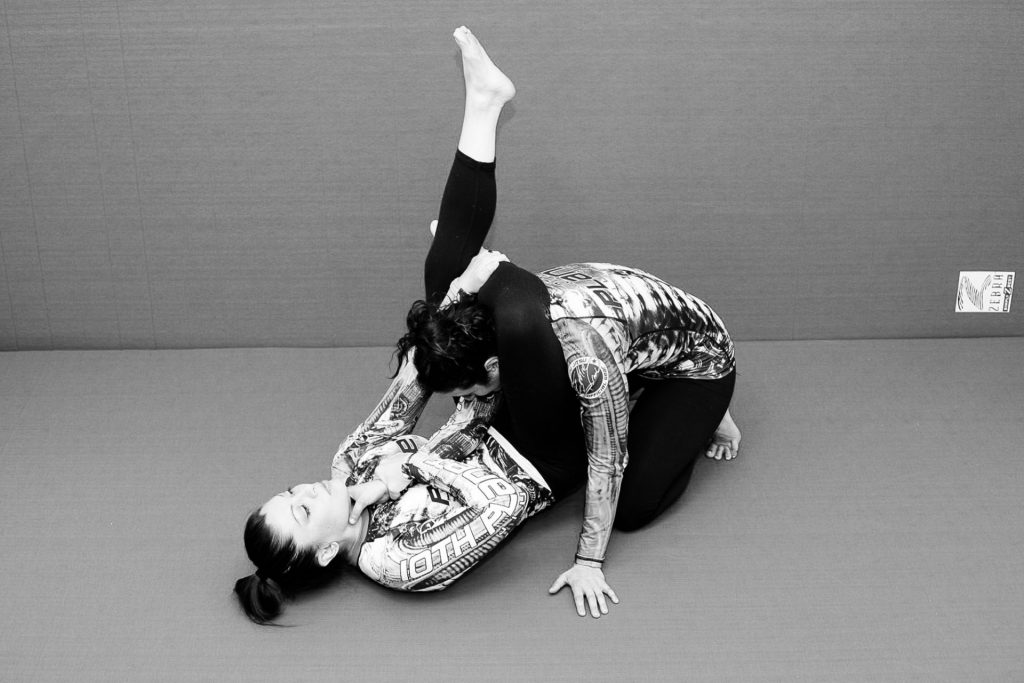 Before this point, though, you have a few options. The trouble with the triangle starts when an opponent has a leg on your shoulder and the other under the opposite side armpit. This, in itself, is not troubling until they cross their legs behind your back, like for a closed guard. this is the diamond position that’ll allow them to control your posture. In turn, they can use it to get into position to finish the choke. So, the diamond position is the first moment you need to react to a triangle choke.

Next up its posture. Even if the opponent manages to lock the triangle you need to make sure you have your posture. You won’t be able to keep it for long, but you that won’t matter if you know what you’re doing. The moment o use a triangle choke defense is here, while you still have the posture to resist.

Finally, once your posture goes, and their legs are in place, the last piece of the puzzle is your arm. If you allow your arm to cross their centerline, you’re done for. Luckily, there’s a last-gasp escape which is a bit unorthodox but does help defeat a fully locked triangle choke.

Perhaps it sounds like defending the triangle choke is no hard thing, but nothing can be further from the truth. If you’ve ever been caught in one, you know. That said, know that it’s clear whether the dangers lurk, we can look to utilize specific defenses for each stage. The three triangle choke defense techniques we’ll cover today work just a well for the beginner as they do for advanced students. If you’re aware of what you’re doing, you’re going to be successful with them for sure. This means you need to stop panicking when a triangle choke is looming and think about your main problem and the solution to it. her area three great options:

This defense comes into play the moment you feel your opponent has the legs in position. When they lock their legs fro the initial diamond, you can expect a pull on your head next. Before that happens, you’ll need to thread the outer arm underneath the opponent’s leg that’s under your arm. This will allow you to use your inside arm to wrap the knee of the same leg and pin it to the ground. You can stay there as long as you want because there’s no way for an opponent to finish you from there.

Once you’re ready to go, use the first arm and place the palm on top of your head, creating a frame. This frame will allow your head to slip out and you’ll end up in side control. Now, it’s time for some punishment!

The previous triangle choke defense requires quick thinking and recognizing where you are. Since in reality, you’ll often be late for that one, your next option is what I call the basic triangle defense. It is the most fundamental triangle defense that works against all levels of opponents.

For this escape, you’ll need to react by going into super posture the moment you feel the opponent’s legs locking in a triangle. In order to get super posture, you’ll need to get up on your knees and drive upward as much as possible. The goal is to get eth opponent’s hips on your thighs while keeping your posture straight. From there; you stand up on your feet and throw one leg over the opponent’s waist. Sit back down and throw the other leg and you’re safe. A simple lean back is going to break their triangle now and expose their legs to leg lock counters.

This last one is a bit counter-intuitive, as it takes you towards the choking leg. However, once you’re deep in a triangle, and you can’t regain your posture, there’s actually not much else you can do. This triangle choke defense works great, you just need to stay calm enough to execute it. Luckily, it is a very simple one.

From a full on the triangle, you need to try to get your trapped arm’s palm on the thigh of the choking leg. Use the other arm to grip the knee of the same leg. This is where the crucial moment happens. You’ll want to place the thigh of that leg on the ground by using both your arms. However, remember to also shift your hips towards the opposite side. If you simply put their thigh to the ground and remain static, your opponent can get you back, or just transition into a mounted triangle that’s a lot harder to escape.

Once you’re in proper position, use your shoulder to apply pressure on their calf. You can now use the near side knee to put pressure on their hip, thus opening up their triangle. AS a bonus, you’ll land in side control once again.