Carlos Condit was sucker punched by US Special Forces soldier and that was enough for Carlos Condit to Knock him out.

The story came from Michael Bisping and now here is footage of it. Something that was supposed to be soft sparring turned out in a huge knockout. As Bisping explains it, the soldier was the cool guy but suddenly he went pretty hard on Carlos Condit. Carlos was suddenly sucker punched by a soldier and when he recovered he went had on the soldier. Carlos had clear attention to drop him down and he did it.

In the footage of that sparring, you’ll see that Carlos was first light rolling with US soldier and after that, they went into light kickboxing sparring. The footage clearly shows everything that Michael Bisping said in a podcast.

“We did some very cool stuff. And one of the things we did was go to an out-base where there was a very small camp set up, very little people and it was where some special force — badasses basically — a small group of hardcore special forces guys and they had a tiny little gym set up.

“In that gym was a boxing ring and we went in there and we were meeting these guys and just shooting the shit, talking to them, and then one of them says ‘would you like to spar?’ I was like ‘alright cool. I’ll spar with you.’ So we put the gloves on and I’m just messing with the guy throwing out a couple of light jabs.

“To be fair, the guy was cool. We had a nice friendly spar and I threw a few jabs and I took it easy and that was that we finished. One guy then says to Carlos Condit — another one of the special forces guys — ‘do you want to spar’ and Carlos Condit says ‘yeah, sure, no problem’. Oh, and by the way, they call him the Natural Born Killer, that guy is cool as fuck. He never raises his voice and he’s super mellow. They put the gloves on and the special forces guy says ‘how hard do you want to spar?’

“So the guy says ‘cool’ but then all of a sudden, right then and there the special forces guy: bang … he suckers punches [Condit] as hard as he can. And I mean a fucking hard shot. And Carlos goes down to the floor.

“It was a big heavy shot, but Carlos gets up, shakes his head, gets his shit together, and then just goes at the guy. Jab, the right hand, left head kick, boom, knocks the special forces guy straight through the ropes onto the floor, unconscious, out cold. Everyone in the room was looking around like holy shit.

“I was like ‘oh Carlos, I’m not sure that was the best thing to do,’ but fair play, ever since I saw that I was like he’s a bad motherfucker man. He’s a great guy.”

Carlos Condit actually said one very interesting sentence to a soldier, “it’s up to you man, hit me as hard as you want to get hit”.
Well, the soldier got what he was looking for.

Check out the video of Carlos Condit knocking out soldier.

Make sure you don’t miss the opportunity, the Special offer from BJJ Fanatics and their Super Deals with discounts going up to 70% RIGHT NOW.
You can find the newest instructionals from Craig Jones, Tom DeBlass, Bernardo Faria and many others. If you decide to upgrade your BJJ don’t forget to use code “FANOM10” for 10% discount more! 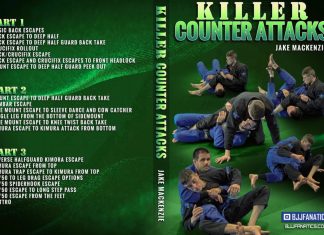 0
The defense is the best offense! OR was it that attacking means you do not have to defend? Well, things are not always so...