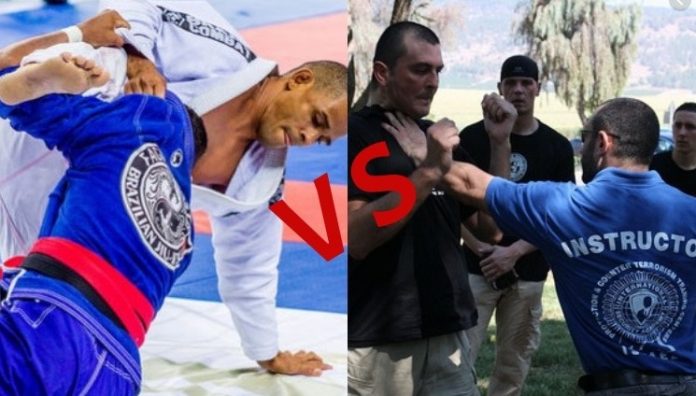 The world of martial arts is full of many different people. Of course, there are a lot of frauds among them, just looking for a payday. While they can’t really make it past established filters in sports martial arts training, they certainly roam wild in the domain of self-defense. The thing is that you can say anything you want about stuff that works, and, since you can’t train self-defense realistically, there’s no way to prove otherwise. Until you need to defend yourself, that is. IN truth, there are martial arts and fighting systems that work. There are many more that are as imaginary as Neverland and will only get you in trouble. Among those that work, Krav Maga and BJJ are two that stand out quite a lot. But, in reality, when we look at Krav Maga Vs. BJJ, which one ends up being the better self-defense option?

The reason I’m writing this Krav Maga vs. BJJ article is that I have strong opinions on both of these arts. I am neck-deep into BJJ and have been for the past 9 years. Before that, however, I’ve dabbled in everything martial arts-related, including a 4-year sting in Krav Maga. So, my experience includes both. And I was one of the lucky ones. I was able to train Krav maga under experienced and recognized instructors. The same holds true for my BJJ journey which is still ongoing. I never got to use any of them (much) in a self–defense scenario, but I do think this particular debate needs settling.

Contents hide
Real World vs. Fantasy Self Defense
You Know BJJ But What Is Krav Maga?
Krav Maga vs. BJJ For Self Defense
Summary

Real World vs. Fantasy Self Defense

What exactly is self-defense? Let me tell you what it is not. It is not what you see in the movies, where Steven Seagal takes on a dozen people armed with everything from knives to machine guns. It is not even what you use in more modern movies, where the number of opponents is reduced, but the damage taken on both sides is extremely unrealistic. Now, let me tell you what self-defense is all about – survival. And in self-defense one thing is as certain as the sun rising tomorrow – you won’t get out unscathed. Self-defense is ugly, never works as planned, and you’ll certainly be hit, and maybe somewhat injured in the process. If you come to think about it, it is not that different from rolling in BJJ…

Anyways, as I teach everyone in an Introductory BJJ class, there’s just one self-defense move that always works. It is 100% efficient and will get you out of any altercation without any injuries. That is running away. Fast.  However, in reality, this is sometimes impossible. When it comes to really having to defend yourself or your loved ones, you need something that works. And, if you’re thinking about Krav Maga vs BJJ in terms of what’s better, I can at least say you’re thinking in the correct direction. Both couldn’t be further apart in terms of how they’re set up, but their basic self-defense concepts and ideas are similar. The reason, as I said, is that both focus on surviving, and getting as far as possible from a conflict.

The main thing with both these martial arts is that they’re among the few self-defense systems that are realistic. Although Krav Maga does involve weapon defense, it does so in a really down-to-earth manner. No Ninja flying moves against guns and knives, or knocking out multiple opponents with death strikes. BJJ and Krav Maga are real, and can both help you find what you’re looking for, albeit in very different ways.

You Know BJJ But What Is Krav Maga?

There’s no point in looking at Krav Maga vs BJJ for self-defense before we actually know what both are. If you have no idea what BJJ is, feel free to browse through this website, and you’ll figure everything out. In terms of Krav Maga, I’ll try and keep things simple. It is a fighting system, rather than martial arts that has its origins in Israel. It was put together by Imi Lichtenfeld, before world war II. He was a boxer and wrestler, so you know where the foundations of the system are from. Moreover, karate and Judo made their way to complete the four foundational arts of the Krav Maga system.

In the beginning, it was used mainly as a military style. Of course, it develops throughout the years and is now IDF’s (Israeli Defense Force) main combat system. There’s also a civilian version of it being practiced around the world. That’s exactly what’s getting a lot of attention in terms of self-defense. The best part about Krav Maga is that like BJJ it does not stop evolving. Today, the art uses moves from Kickboxing and BJJ among other arts, gaining in-depth and efficiency.

Training Krav Maga is similar to other martial arts in the beginning – you learn stances, striking and grappling mechanics, and the likes. However, very soon, they start incorporating something that’s highly unique – a stress drill. They put people under real stress and scenarios that mimic those that happen outside. There are a few different major organizations (like in any other sport / martial art) and there’s a grading system, usually not involving belts. The style of training is impossible to use in a competitive form, so there’s no competition >there are, however, full-body armor, real fights, among other things, in order to help simulate real-world scenarios.

Krav Maga vs. BJJ For Self Defense

So, Krav Mag vs. BJJ for self-defense. Who wins? I’d have to say it is a tie. However, it is not a regular type fo tie. In terms of efficiency, both Krav Maga and Jiu-Jitsu are top choices. Still, BJJ does have a much bigger learning curve to Krav maga. ON the other hand, it offers a lot more control over opponents of all shapes and sizes, meaning you can stay away from needless lawsuits. After all, there’s a multitude of groin and throat strikes in Krav Maga that might land you in different kinds of trouble – legal ones. That said, both arts are very different. They involve fighting on the feet and the ground, but when down, BJJ clearly has the primate. Rolling on a constant basis equates to most of the stress drills that happen in Krav Maga.

One key difference in the Krav Maga vs. BJJ self-defense debate is dealing with multiple opponents and weapons. Both get attention in Krav Maga, but with a realistic approach. Namely, if you face more than one opponent. You’ll most likely be able to defend yourself but at cost of physical injury. AS should be expected. In terms of weapons, they teach a“watered-down” version of the military versions. It is clear this stuff works given that the Israeli military uses it in combat, but that doesn’t mean it’ll work for you. The crayon/lipstick drill is a perfect example of this.

In Krav Maga training, there’s a drill for knife defense where you wear a white T-shirt and a partner keeps attacking you with a red crayon.  Trust me, no matter how much of a knife defense expert you think you are, you’ll end up with red on that T-shirt. Krav Maga and BJJ are both honest. BJJ does not even include edged weapons defense. Krav Maga teaches you that you can survive, but you’ll get cut, and most likely badly in the process.

The best possible scenario is not looking at Krav Maga vs. BJJ for self-defense, but rather both of them for self-defense. They offer different dimensions but are complementary to each other. After all, BJJ is a big part of the ground fighting in Krav Maga anyway. So if self-defense is your goal, why not do both? Krav Maga will yield faster results, whereas BJJ will introduce a component of control otherwise lacking in Krav Maga. I love the combination and definitely recommend you try it yourself.