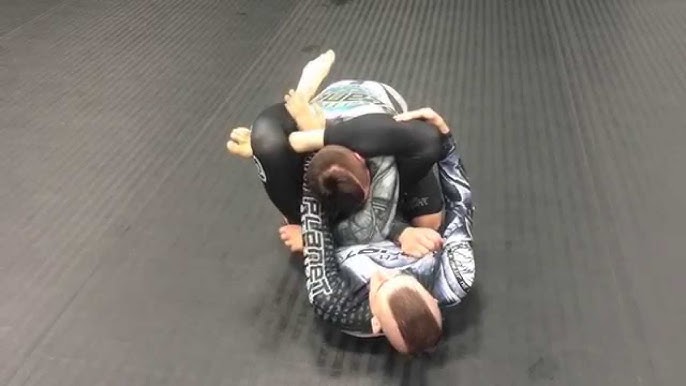 Have you heard of the Dead Orchard? No, it is not a flower we are talking about, it is a BJJ submission. In fact, it is one of the most effective, If not the most effective armbar setup from the guard. Despite what you think, and probably have been taught, the armbar from guard is not as nearly as high-percentage at the highest levels of the sport as it has been portrayed to be. The submission itself is not the issue – setting it up from the guard (any guard, more or less) is. That is where Nathan Orchard’s setup comes into play.

The armbar is a reliable submission that when set up correctly, will make most people tap. Doing armbars from top positions, like mount or knee on belly is a lot more reliable though, due to a simple reason – gravity is working for you in these cases. Setting the submission up off your back is not impossible, it is just harder. In addition, most common setups involve so many steps, that they become far from optimal. Actually, all those steps actually render them ineffective. The Dead Orchard is one of the few submission attacks from guard worth considering.

Contents hide
Submissions From Guard Don’t Work… Unless They’re Unorthodox!
The Dead Orchard Arm Bar Setup
Why Listen To Nathan Orchard?
All In All

Let’s go through the basic armbar setup from the closed guard. You have grips on the sleeves (or collar and sleeve) and you isolate and arm by pulling their elbow high on your chest. From there, you open your guard, swinging in a circular fashion in order to change the angle in relation to your opponent. Then you place one leg over the head and focus on keeping their posture broken with the other leg across their back. From there, you usually need to adjust the grips before extending your hips to finish the submission.

The best example I can give on why this is sub-optimal is trying it on a grappling dummy. If you’ve ever tried it on a grappling dummy what you’ll notice is that this setup is hard and you still mess it up. Now, with a live partner that is existing, looking to set up an armbar this way seems like trying to hold water in between your hands. In different terms, this setup will work if your opponent has never trained BJJ a day in their life, or they make a bunch of mistakes one after the other. That is hardly something you can expect to happen at the highest level of the sport.

So what is the solution? Well, since the armbar is a reliable submission, we fix what seems to be the issue – the setup. Instead of what everyone expects from you, go with the unorthodox, like the Dead Orchard.

How exactly does the Dead Orchard armbar work? Well, the finish is pretty much the same as with any other armbar – you hyperextend the elbow. The reason why it will work is that the opponent is not going to be able to posture out, back out, or stack you to defend. I bet that got your attention.

The Dead Orchard got its name from the founder of the move, Eddie Bravo black belt Nathan Orchard. He uses the rubber guard to set up the move and solves two issues with it. Firstly, it solves a gap in the rubber guard that people often exploit to get out, o the side where your arm controls the shin. Secondly, it solves the setup and finishing of the armbar and even offers several different arm locking options.

What Nathan does from the rubber guard is trap the use the fact that people leave both their arms inside your legs in fear of a triangle. WIth the rubber guard in place, the goal is to either pull (the more obvious version) the elbow of the arm on the side opposite of your rubber guard or use your other leg to trap it in place so that it can’t go back.

From there, the Dead Orchard is basically a triangle but locked on the opposite side of a regular one. Even though you might not have a choke, you have both the opponent’s shoulders trapped inside a triangle configuration, which is a closed wedge system, is one of the strongest structures in BJJ. Moreover, you can do armbars on either arm or opt for nasty bent arm locks if you’re feeling particularly evil.

Why Listen To Nathan Orchard?

Nathan Orchard is one of the best grapplers to come from the 10th PLanet Jiu-Jitsu system. He is very well-rounded but does love to play off his back. Nathan likes to compete and does so a lot, both in No-gi and Combat Jiu-JItsu. He has fought pretty much the who is who of grappling, including Masakazu Imanari, Craig Jones, and AJ Agazarm.

In addition to being a competitor for the better part of two decades now, he is also a great coach. Orchard teaches in 10th Planet Seattle but is also the co-founder of 10th PLanet Portland. His moves have been tried and tested over the years, both by him, his students, and other black belts in the 10th PLanet Jiu-Jitsu system, and even outside of it. The Dead Orchard armbar is arguably his best work, so much so that it has worked not just in No-Gi, but also in the Gi (Caio Terra has pulled it off in competition, I think) and in MMA (Ben Saunders in the UFC).

With 6 EBI appearances and titles like Naga, Gracie Nationals, Gracie Worlds, as well as several superfights in Onnit, Polaris, and other pro-tournaments, it is clear why Orcahrd’s armbar setup should be taken seriously. In short, it works because people don’t expect it and see it coming, as well as because it solves some e of the key issue when it comes to setting up armbars from the closed guard.

The Dead Orchard is a great way of setting up the armbar from the guard even if you don’t like playing rubber guard. In fact, it will work particularly well if you are not known for your rubber guard. All you need is to spend several moments in the rubber guard, setting all the traps and never losing control over the opponent and their posture. As far as finishing the armbar goes, once you’re in the Dead Orchard, you can be as creative as you want – your opponent is not going anywhere.