Slap, Bump, and Go. But wait! After the slap, the other guy/girl went straight for an Imanari roll and the bump part turned in you tapping out to a heel hook! these things happen, both in competitions and during rolls. the questions here are should they be allowed to happen, and how should people react to unsportsmanlike cheap shots like this? the desire to win is something we all have, but how far are you willing to go to win in a Brazilian Jiu-Jitsu Match?

There are plenty of ways to win a Brazilian Jiu-Jitsu Match. Submission, points, advantages, referee’s decision… And yet, people will try to do anything and everything to end up with their hand raised after a grappling match. While there is a case to be made about some “dirty” BJJ moves and their use, others are really cheap shots when it comes to sports, and should not be used, purely out of respect. the thing is, most of these moves are not illegal and won’t lend you in trouble with referees which means, they’re, well, fair game.

The Curious Case Of BJJ Rules

BJJ rules are most definitely curious ones. I won’t get into the different rules that different organizations have as I’m not looking to lead a witchhunt against one particular promotion or another. instead, I’ll just comment on the confusion and chaos that Brazilian Jiu-Jitsu competition rules inevitably bring to every tournament.

There are plenty of contradictions in Jiu-Jitsu rules, from moves you can and can’t use, to advantage points, interpretation of techniques one way or another, and the likes. Most promotions have covered this by starting their rulebooks with a sentence along the lines of “the referee’s decision is final and unquestionable“. This, however, leaves a lot of responsibility in the hand of the referees and leaves grapplers confused by what they should or shouldn’t do, given that they’ll sometimes get completely different outcomes for the same exact situation.

That aside, there are those things that are actually legal to do in a Brazilian Jiu-Jitsu match that is the most curious of the mall. Things like faking handshakes, pretending to tap, using dirty (but still legal) moves, and similar actions are not things we see every day. Respect still has a role to play in BJJ, but every now and again we’ll run into someone who’ll use moves like this to get a win. the question is, whether or not people should be allowed to act like this when rulebooks cite other far less “insulting” things as being “unsportsmanlike behavior”.

Cheap Shots: Winning A Brazilian Jiu-Jitsu Match At Every Cost

I must admit, I am a fun of throwing a cheap shot or two now and again. But only in rolling, and only when it is clear that I’m messing around and joking. In tournaments. I’d never resort to using such a move to gain an advantage that might decide the outcome of a Brazilian Jiu-Jitsu match. Footage from tournaments, though, paints a different picture, and we can only wonder what happens behind closed doors during rolls in BJJ academies.

Now, I don’t want to be one of the Rose folks that crises about respect in martial arts and the good old times – I have no idea what those times are. However, I do know there has to be a line somewhere, or we’ll lose the fun aspect of the sport, and competing in matches. It is okay to trick an opponent in a technical and tactical way, But my take on things is that cheap shots should only be allowed in training, as part of fun rolls between friends.

This is a big one in all combat sports. In fact, I can wager this move is as old as competitive grappling itself. The moment a Brazilian Jiu-Jitsu match, people usually shake hands. Actually, in BJJ, they slap and bump. This is a perceived moment of safety and something that people consider to be courteous.

If you are one to look for chap shots, though, this is the perfect moment to pounce,. whether you skip over the handshake completely or simply launch your attack in the middle of it, you’re pretty much guaranteed to succeed with whatever it is you’re trying to do. In most cases, it is takedown, and it will be the easiest takedown you do. It may even earn you a gold medal in a competition if you can sleep soundly at night knowing how you got it.

This one is always making me laugh in the gym. I have no idea why it is called the Brazilian tap, but since a Brazilian black belt told me about it in the first place, I just took it for granted. It is when you are caught in a submission and you know the tap is coming. You raise your arm, obviously about to tap, but still looking to see if you can sneak in a second or two more of resistance. Usually, seeing an arm ready to tap means the opponent will take it easy, waiting for the finish. That is when people lower the arm, and get out of the sub, using the lack of focus and perhaps even a slight release of pressure.

This is the ultimate tricky way to save yourself from losing a Brazilian Jiu-Jitsu match. If you were ahead on points, it may even bring you victory, and it will all come at the cost of your opponent being careful. Perhaps too careful.

This is an area of Jiu-JItsu that still needs to be clearly defined, so whether or not you win a Brazilian Jiu-Jitsu match (or five) using stuff like this is open for interpretation. They can be considered to be cheap shots or simply legit moves that are a part of the game of fighting.

Dirty moves that you can use to win legally include things like putting pressure on the floating ribs, pressing behind the ear, stomping the neck when brEaking armbar grips, stepping on legs when passing, catch wrestling painful moves, etc. They are legal, but they will also get people to frown upon you.

This is something we do see in BJJ and it is never apparent whether it is intentional or not. While slams and the like are obviously illegal, slapping or kicking an opponent while doing a sweep, or putting frames up, etc are sometimes not even cautioned by referees. actually, getting a warning is probably the worse you’ll do, unless you keep hitting someone over and over again during a Brazilian Jiu-Jitsu match.

Once again, stuff that happens unintentionally in the heat of battle is okay, but people do tend to take advantage of loopholes like this, sneaking in some Combat Jiu-Jitsu to help them get the ‘W”. 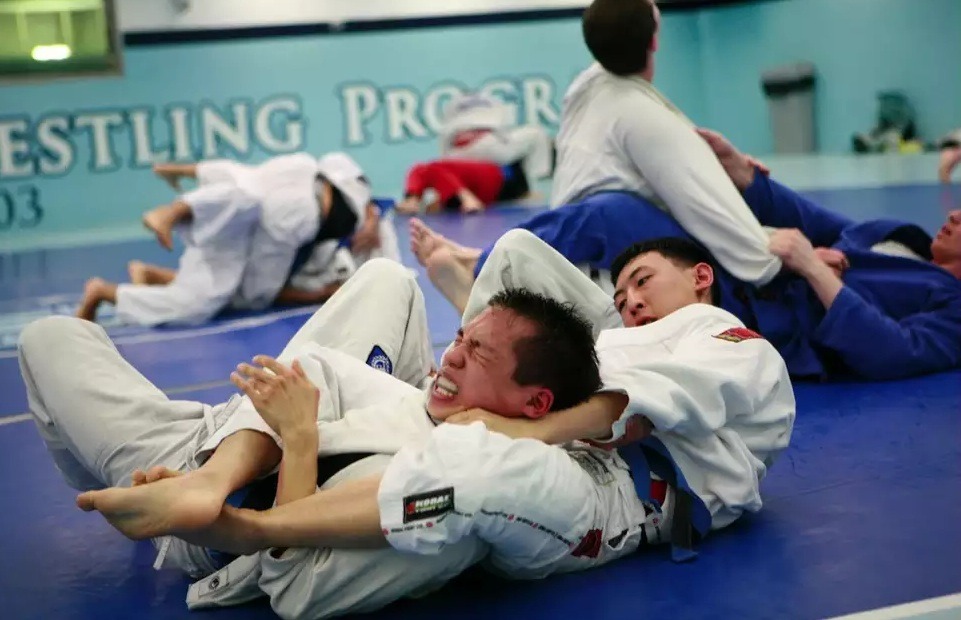 I guess I shouldn’t even mention this, but it is the worst thing you can do, especially in training. Holding on to a submission after someone taps is grounds for immediate dismissal and it is actually illegal. the thing is, sometimes it takes time for referees to break people apart, and in those crucial seconds, someone might end up injured. In the case of chokes, this means putting someone to sleep when they’ve already surrendered, which is just about the cheapest move you can do in all of combat sports.

This used to be a problem, for a while, before rules changed in favor of the folks on the receiving end of it. A clear example was forcing someone’s leg from the single-leg X-guard into a knee-reap position, which would get the bottom person DQed. Rules have changed now to make the person trying to force it getting DQed themselves. However, there are other aspects of BJJ that are not as clear cut as this, and forcing someone out of a Brazilian Jiu-Jitsu match by means of DQ is still a cheap move that people can use.

Regardless of how much you want to win a Brazilian Jiu-Jitsu match, cheap shots should not be the tools you turn towards. It is not just about winning that one time, but about learning and progressing yourself. DOing quick fix things like that will quickly make you notorious, and, eventually, people will find a way to block them. While they might be fun during certain rolls, it is best that we stick to respectful and sportsmanlike behavior during competitions.

What Not to Do In BJJ Competitions