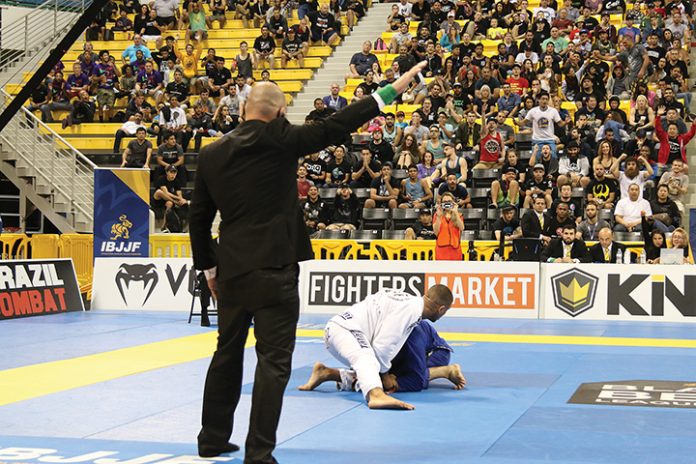 Just recently I got my first go as a BJJ referee. let me tell you, I’d take back every lousy word I’ve ever spoken against BJJ refs! Trying to figure out matches, particularly high paced blue/purple belt one is anything but easy! Just trying t figure out what was going on was difficult enough, without having to think about all the rules I was supposed to enforce. Of course, mistakes happen, and I expect there is not one flawless Jiu-Jitsu referee out there. Still, the experience is great, and I recommend everyone give it a try at a certain point. What I got from it, though, was a whole new appreciation of the notorious advantages. As it turns out, winning BJJ matches by advantage is not just legit, but also pretty difficult to do.

Many people think that advantages ara away for grapplers to game the system. The advantages system is not easy, and those people are probably somewhat right. Those that understand how to make advantages work for themselves are surely going to have an upper hand in BJJ matches. Not only that, but it may lead to victories. That said, there’s a clear reason why so many Gi BJJ matches end up won by advantage – and I have to say I now look at it from a very different perspective. So, let’s talk about BJJ matches and winning by advantages a bit, and why people think it’s a sneaky way of winning.

Okay, first things first, the IBJJF rulebook is not a huge one, but it is not the easiest read either. So, if you’re ever up for refereeing, make sure you really pay attention to anything and everything in there. Even the most inconspicuous things will surely surface during a match. Believe me, you’ll need to use every hand gesture, from giving points to handing out warnings for leaving the mat area. Still, if there’s one gesture you’ll do over and over again, it is the one awarding advantages. In fact, I have no idea how many BJJ matches I refereed, but I must have handed out advantages in at least 90% of them.

The BJJ advantage is something of a conundrum. Not many other martial arts have it, and none employ it as Jiu-Jitsu does. An advantage is basically somewhere in the middle between getting 1 point and nothing. You can gather all the advantages in the world, if an opponent has one more point than you, you’ll lose. You’ll also lose if the score is 0-0, you have 30 advantages and just one single penalty. So why are all these advantages important?

An advantage is a way to reward an unsuccessful, but still deserving attempt at something. However, it goes past just rewarding the more active grappler. You actually need to fulfill a bunch of criteria in order to get an advantage. In simple terms, you’ll get an advantage when you almost do the job. However, you’ll need to be in such a position to actually have absolutely no chance of “finishing the job” in order to get the advantage. So, getting one is not as easy as you may think, which is where gaming the system comes in.

Playing The Game of Advantages

If you take a look at, well, all the highest level Gi BJJ matches you’ll notice that they’re usually slow-paced affairs. Also, you’ll notice that advantages aren’t overflowing like in white/blue belt matches. That is because getting one is actually really hard when both you and your opponent know the system .it can turn into a battle just like the one for point, particularly when two grapplers are at a similar level. In fact, this is exactly where most people try to gain an advantage by getting an actual advantage and everyone outside the two grapplers ends up bored.

Brazilian Jiu-Jitsu, particularly at the highest levels of black belt is rocket science. In fact, it is Elon Musk, reusable-rockets-for-Mars-travels level of rocket science. As such, battling in the final of the Mundials means you’re in a war for that single advantage that’ll make you a world champion. AS such, advantages are worth just as, if not more than points, and are not just something you randomly get out of nothing.

Ther are countless ways people try to make the advantage system work in their favor in BJJ matches. For example, getting pulled into half guard instead of the full guard is one. Form thereon, if you manage to keep the game there, even if you do not pass, you have an advantage. The trick is, you won’t get it until you have no more chance of passing the half guard, which means the opponent recovers some type of open or closed guard. Since this can happens a few minutes in a match, or even at the very end, the advantage point comes late. That means the board shows 0-0 until you’re out of the half guard, in one direction or the other.

This is just one example of how people try to make the advantage system work in order to get that all-important win. And, we have to admit, it is a legitimate part of the game.

The Outcome Of BJJ Matches If We Took Advantages Out

As a competitor, I’ve both won and lost BJJ matches by advantage. The ones I did win did not feel particularly satisfying, as winning by submission. Losing by advantage, though, felt heartbreaking. I’d much rather have lost by tapping out than by a single advantage. Fast forward a few years and I have a completely different approach to everything. In fact, I know actually appreciate the advantages game a lot more.

You know what would happen if we took advantages away? Just take a look at some of the no point submission-only events out the. Metamoris, although defunct comes to mind. Without a clear way fo distinguishing who did more, there would be plenty of draws. And, since you can’t have draws in a single-elimination tournament, that would mean a lot more referee decisions, And, if thee’s one grey area where people can actually be subjective, that’s a referee’s decision. So, advantages are a clear way of making sure we end up wit ha winner, even when there are no points or points are tied. Moreover, they make the tactical aspect of the game much better, since people need to factor in advantages when they grapple.

All in all, the advantage system is actually a good one. There might be space for some improvements but that holds true for the entire rules system. Moreover, advantages can actually keep things honest, since there are clear cut situations in which they’re awarded. What we can actually do to make people understand how valuable they are, is to explain them a bit better. I competed for years and it took me picking up a referee gig to finally understand them.

If you are a BJJ competitor, you need to know the point system. Otherwise, you’ll end up losing more bjj matches than you win. That said, advantages are actually a huge part of the point sytem. They end up being awarded much mroe frequently tahn points, and have the power of easily decidng amatch. So, when yiou end up stuck and can’t get celar poitns, start thinking about getting advantages, instad of only hoping they’ll come if you move about, they won’t.