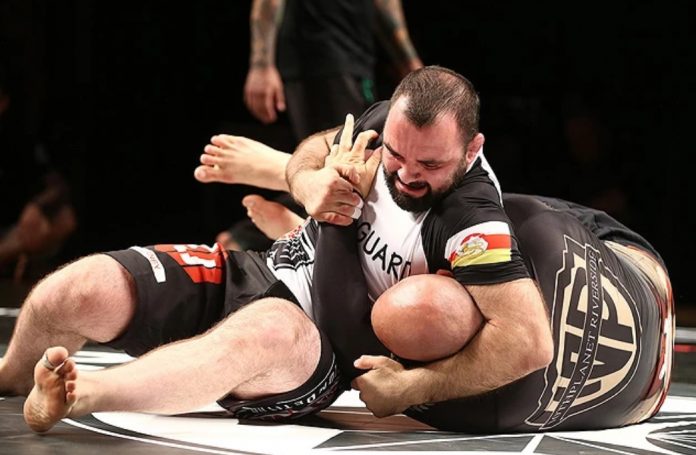 Side control is one of the most fun positions in BJJ. Well, not at first, and especially not if you’re the one the bottom, but it grows on you. The reason most people find side control to be difficult to maintain is the dynamic nature of the position. Unlike in wrestling, a pin won’t do you much good in Jiu-Jitsu. You can’t hold someone down indefinitely, and you’ll eventually lose the position. However, if you decide to play side control ina an open manner, you’ll suddenly find a lot more side control attacks that you might’ve thought were possible. In fact, some are completely out there, but then again, those are the most fun ones to pull off, aren’t they?

Side control attacks usually mean you’re going to the mount or back or finishing someone directly. In most cases, it is an arm lock or a choke that does the trick from top side control. But how many times have you lost everything when trying to transition against slick bottom players? Or, how many submissions have slipped through your finger because they were exactly what the person on bottom was expecting? As high percentage as some side control attacks might be, switching things up form time to time is also a good idea. Why

Why not? Side control is a position that perfectly embodies the idea of Brazilian JIu-JItsu. You can be heavy but needs to stay active. You can submit, but can also end up submitted. You need to think ahead and plant traps because there are many escape options. In other words, you play every aspect of the BJJ game when you’re in side control, both physically and mentally. That, and you probably have more attacks available to you than from any other position.

When you come to think of it, side control [puts you in a unique position to have the opponent’s entire body on a platter. Like, literally. From most side control variations, apart from North_South, your positioning is normal in relation to your opponent, rather than parallel (like in mount, guard, half guard or back control). Moreover, you have inside control (the space in between the opponent’s armpits and hips). That translates to plenty of opportunities for doing pretty much whatever you like. Submission wise, you have chokes, armlocks and leg locks, and a whole variety of them as well. No other position offers so many attacking options.

Even more so, side control attacks don’t include only submissions. On the contrary, you can go and switch positions, trying to climb the ladder of BJJ hierarchy. Mount, knee on belly and back control are the usual endpoints from side control. However, you also have q2uite the few side control variations to play with. From the basic one to the 100 Kilo position, Scarf hold, Reverse Kesa Gatame, North-South… All of these translate to more and more side control attacks you can use.

Let’s start with eth e tightest North-South variation you’ll ever learn. It is an Eddie Bravo invention, and one of his best ones I might add. The usual issue with north-south is finding a way to control both the hips and shoulder of the bottom person without compromising your base. Well, leave it to Bravo to solve this puzzle. For the falt mode, you place one arm at the hip of your opponent. You then place your head on the opposite side, glued to the mats and their hip. The arm on the side of the head goes over the near side shoulder, again, as heavy as possible and glued to the mat. Finally, you use your hip to block their other shoulder, trapping the head in the process.

As long as you keep your body stiff in a push-up-like position, nobody is ever going to get out from there. The best thing is that you don’t have to do anything – literally.

Going on the offensive here, let’s talk about linking several interesting attacks together based on how an opponent reacts. Or better yet, make them react in a certain fashion. From the Kesa Gatame, you’ll often end up with the opponent’s arm over your shoulder. That’s an armlock right there. The key is, trapping them and making them uncomfortable. What you want to do is swing your top leg over their head. But don’t just leave it there, pul with it so that you completely break their posture. Now you can have your fun. An inverted armbar is right there for the taking.

If the opponents decide to push your leg off with their arm, they’ll just open up more side control attacks. As they push, go under their armpit, and proceed to catch a cross-face with the arm trapped in between you and the opponent. Crush them a bit from there before you head off to mount or the back.

This is one move you’ll instantly fall in love with. It will require the use of a Gi, but you might even figure it out in No-Gi if you’re creative enough. Whenever there’s a frame against your neck, that means you have an arm to trap. Loosening up the partner’s Gi on the far side, Wrap it around their arm, aiming to trap the wrist with the lapel. The goal is to control the end of the lapel with the arm under their head. Now, you have several side control attacks to choose from.

The best one, though, is an unexpected mounted triangle attack. First, you’ll need space, so it is imperative that you push the near side leg to the ground in order to wind their hips up. This allows you to swing a leg over and go straight deep into a triangle. The finish is extremely easy, and you still have armbar options left on the arm that’s not wrapped up.

If you haven’t seen Dean Lister vs. Josh Barnett in Metamoris, you need to stop doing what you’re doing and watch that match. What you’ll witness is one of the best side control attacks ever pulled off in a high-level grappling match. Once again it is the scarf hold side control variation, albeit a bit modified.

From Kesa Gatame, the goal is to thread the arm that goes around the opponent’s head as far as possible. the crook of your elbow should end up on the back of their neck. You then gable grip your arms and project your weight forward by shifting your hips. The goal is to pull their chin towards their chest while compressing their ribs at the same time.

This one is a real breath stopper, both for the person on bottom and anyone watching you perform it. It is a lapel choke that comes out of nowhere and is so simple your opponents will hate themselves fro tapping out to it. all you need to do is loosen up your own lapel, on the side that is further from the opponent’s head. This is extremely easy to sneak through and people usually are none the wiser as to what is going on.

The goal is to feed the nd of the lapel to the hand of the arm that’s under the head. And by feed, I mean really feed it deep. Elbow goes back and you simply place your head to the near side hip. The choke is unstoppable and people are going to double-tap with both arms like they’re playing drums.

I mentioned Kesa Gatame several times so far, so now let’s look at the Reverse Kesa Gatame a swell, AKA the twister side control. One more Eddie Bravo brainchild, the Twister version opens up crazy amounts of side control attacks. However, getting to the back via the Truck ahs to be the most attractive and unexpected one. Twister side control is basically Kesa Gatame, but with you facing the legs. For the Truck transition, you want to pull the far leg of the opponent to the ground (wind the hips up). You then use your bottom leg to hook that same leg you’re pulling, as deep towards the knee as possible.

The roll, which is the attractive part, is actually easy. Place both your shoulders on the mats, on the opposite side of your opponent. Now either pull your legs towards your torso for the Truck or extend them fro Twister or back control.

The credit for this one goes to Roberto Cyborg Abreu. As a blue belt, I had an awesome time choking people left and right with this one. I’ve forgotten about it a bit, so this means that I’ll have to dust it off and have some fun with it once again. This is oen of those side control attacks that work perfectly in both Gi and no-gi.

From side control, any side control, just hold the opponent’s own collar with the arm that’s under their head. Pop up, either directly or from knee on belly, and place the point of your knee on their carotid. push with the knee, pull with the arms (your second one is holding the pants at knee level. In No-Gi, both your arms connect behind their neck with an S-grip, near side arm going under the armpit like for a paper cutter choke.

Side control attacks don’t have to be boring, nor predictable. On the contrary, spice things up by introducing unexpected moves and throwing caution to the wind. Who knows what else is going to open up fr you once you let loose from side control. It is all about how you move when in side control, not about how well you stay in place.