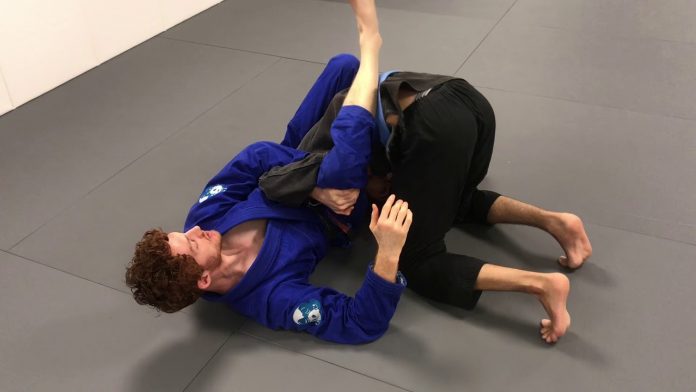 Every once in a while a brand new move surfaces out of nowhere then the world of Jiu-Jitsu. It may be a sweep, a new controlling position, or, most often, a new submission. And by new, I mean a slightly modified move that already exists. Generally speaking, these moves are a result of countless hours of experimentation and mat experience. This means that the inventors of most of the “new” BJJ moves are usually black belt instructors.

However, now and then a purple or brown belt comes up with a true gem that takes grapplers breaths away! Actually, in rare circumstances, even a white belt might stumble on a move that works. Whatever the case, when these moves end up working like a charm against high-level opponents in competition, you can bet they’re going to become BJJ mainstay. One such recent “game-changing” move is the Tarikoplata submission.

As you may conclude from the name, the Ttarikoplata is a shoulder lock. It is one more in a long line of Omoplata variations. Essentially it is a shoulder lock done against a bent arm. However, its true value lies somewhere else. The Tarikoplata has a huge mechanical advantage that is going to force even the strongest opponents into submitting. This is due to the fact that it works against a well-established defensive BJJ principle that nobody could crack so far. Now, thanks to the Tarikoplata, we don’t just get a new submission, but we’ll also end up with a better defense/counterattack strategy after a while. It is the circle of Jiu-Jitsu.

He is a brown belt from Norway, but he moved very early in his career. Although he popularized it at purple belt, he probably had it in the works even as a blue belt. This clearly portrays that in Brazilian Jiu-Jitsu, belt level does not determine someone’s ability to come up with a legitimate move. It is all about individual effort and the evolution of the sport. So, if you’re a fan of Omoplatas and Barataplatas then you are in the right place. Even though the information is pretty scarce, we’ll try to explain the Tariokoplata as best as we can. 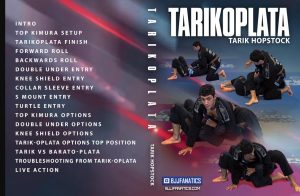 Speaking of Tarikoplata, I bet you still have a lot more to learn about this move. Since the Tarikoplata DVD/DIGiTaL Instructional just came out and it’s awesome. Tarik Hopstock, a Tarikoplata innovator really explained in detail how Tarikoplata works. Also, you can check out our review about Tarik’s Instructional.

So who is this prodigy that managed to come up with such a cool BJJ hack? The culprit behind this brand new shoulder lock is a young up-and-coming grappler by the name of Tarik Hopstock. Tarik is a brown belt under Eduardo Rios. He lives and trains mostly in Oslo, Norway, although he lived for a short while in Morrocco too. Tarik’s gateway to Jiu-Jitsu was Judo, which he took up as a kid. Not satisfied with one training per week, he did some research and came up with Frontline Academy. It was near him, with multiple classes per week and a top coach. Only it wasn’t Judo, but BJJ.

Tarik demonstrated huge talent and a strong will to compete even from an early age. He quickly rose through the ranks, demolishing people in every belt level so far. Now, Tarik trains 2-3 times a day and is sponsored by the likes of Rios gear and Defense Soap.

In competition, the purple belt is where the grappling world took notice of Tarik. Only a few months after getting his purple belt he destroyed everyone in his class and got silver in the absolute of the Swedish IBJJF Open. The move he used to win multiple of his matches was the Tarikoplata, a cruel bent-arm shoulder lock.

There’s a really interesting reason why people are taken aback by the Tarikoplata. It goes against a crucial BJJ principle that we’re all aware of – elbows close means safety. Keeping your elbows tight to your body is something BJJ coaches try to instill in students worldwide. It is beneficial both for defense and attack as it helps make you more compact. Defensively, it is the best way of resisting direct arm attacks. Or, at least, it was.

Now that the Tarikoplata is in play, simply keeping your elbows together is far from enough.  The move is powerful because it is based on another strong BJJ principle in itself. namely, the Tarikoplata requires you to put your entire body against the bent arm of an opponent. That’s a losing fight 10 times out of 10, for your opponent. This is where the Tarikolata is different from the Barataplata as well. It is a much more compact move and is easier to keep a hold of. At least from what little I’ve played around with it.

From what I’ve attempted, the open guard position is the best road to a Tarikoplata. Actually, any Omoplata setup is a possible entry. Whenever an opponent is stubborn by keeping their palm close to their body, you have the opportunity to surprise them. Most importantly, you need to have a leg between their arm and torso, like for an Omoplata. Unlike an Omoplata, Tarik’s shoulder lock requires you to thread an arm on the inside along with your leg.

First, you need a collar grip in order to keep your opponent’s posture down. Next, you’re going to thread your other arm along with the leg. At the same time, you’ll use your free leg as a wedge behind the opponent’s neck. This will allow you to release the collar grip and thread the arm over so that you grab your own hip (like in Spiderweb).

Then, you’ll have to flip your opponent over. To achieve this, you need to switch your hips and use the same motion as an Omoplata with your leg inside. You’ll end up in an S-mount-like position. All it takes to post with one arm and push your hips in for the tap.

One very very useful application of the Tarikoplata is as a counter-submission to a stack pass. All you need to do when an opponent attempts to stack you is to place the collar grip in. Then, thread your other arm in on the same side. Even though you don’t have the elbow exposed, you still proceed as before. The next step is placing the wedge behind their neck.

From there, a palm-to-palm grip and a pull are enough to expose the opponent’s elbow. Once their elbow is between your thighs, you simply go for it as before. Thread the other arm in, flip the opponent and finish with hip pressure from the top.

One of the best and probably the easiest setups for Tarikoplata is once you manage to catch the Kimura grip from side control. Having your legs above your partner’s head gives you enough leverage to pull your partner’s arm up and swing your leg over him.

Just like in usual Tarikoplata the main pressure will come from your leg pushing your partner’s arm together with your arm pulling his elbow. Just make sure you don’t lift the pressure leg high in the air and going with full uncontrolled rotation of your hips because it’s pretty easy to hurt your training partners once their grip holding their attacked arm breaks.

The Mechanics of BARATOPLATA – A Painfully Effective Submission