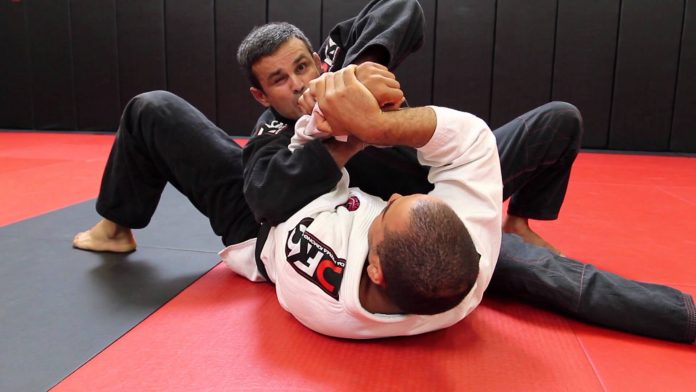 The side control position is a position of different opportunities at different times of training BJJ. For the white belt grappler, it is mostly the safe heaven position from the top. Passing the guard to get to side control is as good as getting any submission. At blue belt, it is mostly about staying there for long enough to get to the mount or back. Submissions from side control really enter the frame at around the purple belt level. At brown belt, it is all about weight distribution and effectiveness without too much effort. After that, at the black belt, side control is just another position where battles for details decide the outcome.

What I stated above is just a general idea of what happens from a certain Jiu-Jitsu position as people progress through the art. There are no rules, and white belts might turn out to have a deadly submission game from there too. That said, today’s focus is on the “purple belt phase”, i.e. submissions from side control. The side control position is the pinnacle of the phrase “position before submission”. Retaining side control is no easy feat even for seasoned grapplers. Conversely, attacking while keeping the position really requires experience and the appropriate choice of techniques. Just like with every other position, some submission options are simply more reliable than others.

The “Side Control Destruction Gi & No-Gi” DVD by Will Grundhauser is a very comprehensive guide to submitting people from all side control variations. It is full of crucial details that make you feel like a ton of bricks while you’re hunting for the subs!

How To Attack From Side Control

The one thing you need to understand about side control is that it is very dual in nature. You can either be static and have utter and complete control, or be dynamic and go for submissions. Hunting for submissions from side control means you need to understand how to distribute your weight and prevent the opponent from escaping. Static control, on the contrary, is mostly something competitors use to secure points.

On the subject of points, let’s clear up a common misunderstanding. You do not get any points for getting side control. The reason most people associate the position by getting three points is because of passing. When you pass the guard, you end up in side control in most cases. The three points you get are for the pass, not the position itself. Another common reason for the confusion is ‘sweeping”. If you find yourself on the bottom of side control, and you flip positions, you won’t get any points. Sweeps work from guard positions only so the only thing you get is a reversal, which might bring you an advantage.

Technically speaking, there era two major factors in attacking from side control. Both affect your attacking options very much, defining what you can and cannot do. These are the ways in which you position your arms and your legs. Namely, you can’t go for a leg lock directly from North-South, without completely losing control over the opponent. You need to understand how limb positioning affects your attacking opportunities from side control in order to be effective from the position.

Nasty Submissions From Side Control

Submissions from side control that work with a high percentage are not that many. While there are plenty of attacking options, not all of them are easy to pull off. Especially when you factor in weight distribution and all the technical details. In that sense, the submissions we’re about to go over, are both easy to get and can be set up without your opponent even noticing.

In terms of availability, the submissions from side control you can get are chokes, arm locks, and leg locks. Learning how to use them is not hard when you know which submission fits which positional variation. Furthermore, backing up every submission with a transition to mount, back or Ashi Garami is also key. Finally, all these submissions work as a chain as well, offering you the option to be a constant submission threat from side control.

If there’s one thing you can easily do from side control, it is attacking the wrists. No matter which side control variation you choose, bar North-South, you’ll have a near and a far side arm to attack. Since most opponents will be looking to defend with their arms close to their chest, you can hunt for wristlocks with ease. From the most basic side control position, where an opponent is framing on your neck, you’ll want to first release their head. Use that arm to isolate their far side arm completely. Place the other arm underneath the triceps of their arm. Once you have everything set up, use the first arm to pull on their elbow. This is going to change the angle of their forearm so you can place pressure on their wrist with your shoulder/collarbone.

Armbars, both straight and bent, are also very viable options from side control. Since the Americana is fairly easy to defend, and the armbar requires you to end up on your back, your best overall bet is the Kimura. For the Kimura, you’ll start from the same position as the wristlock, taking your arm from under the opponent’s head. Actually, you might go for the wrist lock, and the moment the opponent’s arm slips past your shoulder, you have the Kimura set up. After all, I said it was a chain of submissions from side control, right? Once you have the arm trapped, you project your weight forward, moving to the North-South at the same time. From there, getting the Kimura grip is easy. If finishing doesn’t go your way, you can always transition to a straight armbar or to the back.

The paper cutter choke is one of the top submissions from side control you can go for with the Gi. In terms of arms and leg positioning, you start from the basic side control position, but you’ll have their near side arm trapped with the arm that’s near their hips. The goal is to thread your arm all the way to the lapel on the back of their neck. Once there, you should establish a four-fingers-in grip. When you have it, you’ll switch your hips, like for a Kesa Gatame. This allows you to place your forearm across their neck, gripping the far side lapel. Switch back your hips and you’ll end up in a very deep choke that’s hard to defend.

The arm triangle is a “classic” side control submission that works both in Gi and No-Gi. This one works from the basic side control position, where you keep your arm under their head. The goal is to trap their far side shoulder between your head and their’s. The best way to achieve this is by using a palm to palm grip to take all space away. To finish the choke you’ll need to go all the way through by placing a knee on belly. The beauty of this is that you’ll end up in the mount at one point. This means that you can collect the 4 points and proceed to choke your opponent has a large points advantage.

Leg Lock Submissions From Side Control

Leglocks are not the usual submission from side control, but they are effective nonetheless. One great example is the kneebar. Getting to the kneebar requires you to go for a Kimura. It is a great way to make sure you get a submission if you cannot place the Kimura grip in after you get to North-South. Still controlling the arm, move to the other side, and grab the opponent’s leg, undercooking the knee. You’ll end up in an armbar-like position with a leg in between your opponent and you. All you need to do is turn toward the leg you’re controlling, let go of the arm and throw your legs around their leg. In order to maximize your chances of success, place the opponent’s foot under your armpit to finish the kneebar.

Since we covered attacking from all other side control variations, let’s give the twister side control a little moment of glory too. From there, you can once again get a kneebar, or go into the 4/11 position for more finishing options. Going for this one requires you to face the opponent’s legs in the first place. The goal is to place an underhook under the knee of the far side leg. Use the grip as an anchor to pull yourself into a reverse knee on belly position and all the way across. You’ll end up in the 4/11 position, with plenty of finishing options available.

DVD and DIGITAL Instructionals Related to Submissions From Side Control :

4 Knee On Belly Escapes You Need To Learn