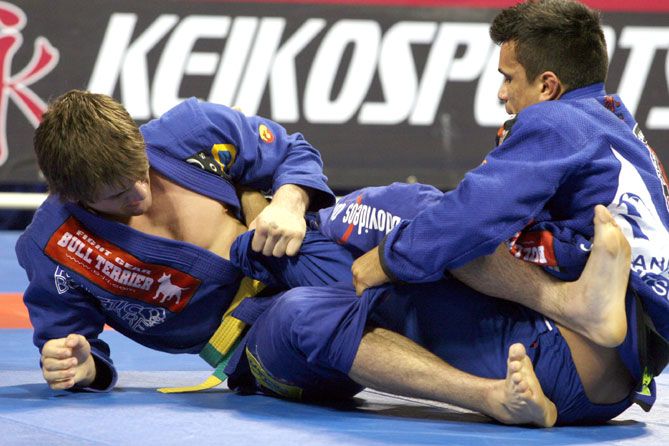 It is amazing how certain BJJ positions get completely opposing reactions in different time periods. The usual example is, of course, that of leg locks. Previously seen as a cheap move, today they’re redefining the world of grappling martial arts. There are plenty of Jiu-Jitsu positions that come in and out of “fashion” as times change. The Berimbolo is no longer a mystery, but neither is it done as often as before. One of the positions that have gotten lots of slack over the years is the 50/50 guard. Much like with leg locks, the 50/50 guard is finally getting some recognition as the dangerous position it is.

Today’s big resurgence of the 50/50 guard is connected to the rise of leg locks. It predates the Danaher Death Squad system for a short period of time and was brought into the spotlights thanks to Ryan Hall. He is such a proponent of the 50/50 guard that he has named his academy 50/50 Jiu-Jitsu. Hall proved the efficiency of the position in both BJJ and MMA competition, lifting the veil of ignorance off of the position. From there on, things started looking good for the 50/50. So much so, in fact, that even the IBJJF changed the rules regarding the position a few years back.

The 50/50 guard is a Brazilian Jiu-Jitsu position that falls under the open guards’ category. It involves two athletes getting entangled with their legs intertwined in very similar fashion. One competitor’s leg gets around another competitor’s same side leg, thus providing the same set of circumstances for both. Since both opponents have the same opportunities, the position was dubbed “50/50”. During the engagement, both people are usually seated on the ground, hunting for leg locks or different lapel guard options. The mechanics of the guard change slightly when one opponent stands up, but once again, both players get opportunities to work so it remains a 50/50 situation.

The 50/50 guard is very easy to attain from a wide variety of different positions. Such is the diversity of this position, that entries are available from both standing, top position, bottom position and even while escaping bad positions. Here are a few different entry concepts to reach the 50/50 guard that you can use based on the resistance and skill level of your opponent.

The Bad Reputation Of The Position

This guard is often associated with stalling in BJJ competitions. Or at least it used to be. Since the much-debated ban on “knee-reaping” and heel hook attacks, the 50/50 was demoted to a tame position. Players would usually consider it a strategic position that allows the competitor familiar with it to play the point system.

The bad reputation of the 50/50 guard was due to the perception that none of the competitors could (or would) advance in a match. Submissions, the ultimate goal of a Jiu-Jitsu contest, were thought to be off the menu from the 50/50 guard. Instead, both competitors are stuck in a battle for advantages and sweeping points. Sweeping was huge from the 50/50 guard but practically ineffective. You can sweep your opponent pretty easily from the position, but they can sweep you right back. So, people started faking sweeps to get advantages and win matches by the smallest of margins. Since the 50/50 guard is easy to maintain but doesn’t get negative stalling points, competitors used it to run down the clock while controlling their opponent without much effort.

The 2009 World Championship featherweight black belt semi-final did not help this perception. Rafael Mendes and Rubens Charles went for a 9 minute 50/50 “battle” that seems like nothing was happening. The two grapplers were stuck in the 50/50 position for exchanging sweeps. To be honest, they did attempt a few Toe Holds, but with no apparent success. What they did achieve is open up the stallers’ eyes to the opportunities of the position. From there on, matches like that became the standard, rather than the exception.

Fábio Gurgel and Rodolfo Vieira, among others,  criticized how people were using the 50/50 it to slow matches the game down.

So, is the 50/50 guard really that boring? Truthfully, that depends a great deal on two major factors. One is the context of use, while the second is the rule set of the tournament. An ADCC match where heel hooks (both regular and reverse/inverted) are allowed, demonstrates how dangerous the 50/50 guard can be. Actually, in most No-Gi settings, the guard provides spectators with great entertainment and excitements.  On the other hand, in an IBJJF tournament where heel hooks are outlawed, it is a whole different story. Since even toe holds are only allowed at brown and black belt level, the 50/50 guard can grind all action to a halt.

Since the heel hook is probably the 50/50’s most powerful weapon, it would be great if the IBJJF would reconsider their rules. However, it is not just heel hooks that can be done from the 50/50 guard in high-level matches. Modern lapel guards are the analog of leg locks for the Gi community. They’re proven moves that are frowned upon by the No-Gi proponents (for obvious reasons) However, the lapel game is another huge aspect of the 50/50 guard that makes the position exciting. If two people are forced to battle for straight ankle locks and/or sweeps from the 50/50 it will indeed be a boring affair indeed. But it’s not the position’s fault it is how it is perceived by grapplers. So wise up and discover all the awesome opportunities from the 50/50 guard.

First, it is important to understand what the 50/50 guard has to offer. It is important to be aware of what you’re looking for once in the 50-50 position. This understanding will give you a better chance of progressing through it towards a submission. For starters, you have to make sure have control over the knee of your oponnent’s trapped leg. The best way to go about this is using your arms. Whoever controls the knee in the 50/50 is going to control much of the action. For one, the opponent won’t be able to step out of the trap. Even more so, you’ll both have offensive opportunities and be fairly safe yourself.

When an opponent is also familiar with the 50/50 principles, it becomes harder to stand up. If you feel like you’re behind your opponent, you should primarily make sure you’re safe from submission. Causing your opponent to stand up is a great way of evening the odds. However, whenever you sweep from the 50/50, remember not to follow them and come up on top. If you do your leg might end up trapped and you’ll be in the pendulum-like sweep exchange. Make sure you have your knee free before you get up, or, even better, set u pa submission while your opponent is falling down.

As the position continued to develop, more submission attacks are becoming available from the 50/50. Foot locks, toe holds kneebars, even D’arce setups and armlocks are starting to pop out everywhere. Other from Ryan Hall, Rodrigo Cavaca along with his students, is one of the biggest 50/50 guard innovators. Check out some cool options, legal across all rule sets, from the 50/50 guard:

The basic concept when passing is to initiate a position that turns the odds in your favor. That means transforming the 50/50 into a 70/30 at least. Otherwise, you’ll just end up back on your butt.  A great concept comes from Caio Tera, where your inside leg has to get across and to the opposite side of your partner’s body.  This position is now called “unfair 50/50.”  the reason is that the “leg across” concept takes away all the leverage of the bottom person, allowing you to apply pressure and break the structure of the guard.

Invest In Jiu-Jitsu Leg Locks To Really Master Them