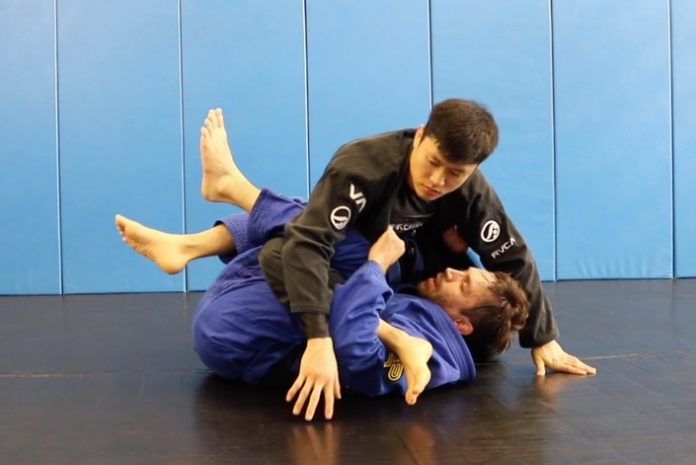 In BJJ there are a few sweeps that are considered to work universally against pretty much everyone. They’re a sort of Hail Mary, that you turn to when all else fails. That said there are times when those sweeps fail you need to have options instead of just staying stuck there with nothing left to do. For most people, the BJJ waiter sweep is one such position of very high efficiency. And, if truth be told, they’re not wrong. The fact that the sweep work mainly from the deep half guard only strengthens its position as a Hail Mary move. However, at the highest levels of the sport, you need to have a Hail Mary for your Hail Mary. Or, even better, a few of them.

Personally, I’m not a huge fan of the deep half guard. It works and all, but I’m not really keen on having to use that particular way of getting underneath someone. Still, one move that’s commonly associated with the position is definitely amongst my go-to moves. That is the BJJ waiter sweep. And yes, contrary to what some people think it is not only available from the deep half guard. In Gi Jiu-Jitsu, where lapels are in play, the deep half guard is one of the best sweeping positions you can find yourself in. Even in No-Gi, it has its merits. However, if you take a look at the stuff that’s really high percentage, you’ll find one reoccurring move – the waiter sweep. And still, this sweep is not the end, but rather the beginning of a neat little attacking system.

The BJJ waiter sweep is a simple sweep that uses leverage in a painfully obvious way, Perhaps this is exactly why it is so efficient. The sweep works perfectly against people of all sizes, as long as you can set up the initial grips and hooks. Once you’re in though, one thing to remember is that you do not actually have to sweep. On the contrary. Just like a D’arce choke can work as a position of control and submission, the BJJ waiter sweep can also be both a position for safety and a sweep, depending on your preference and the situation you’re in. 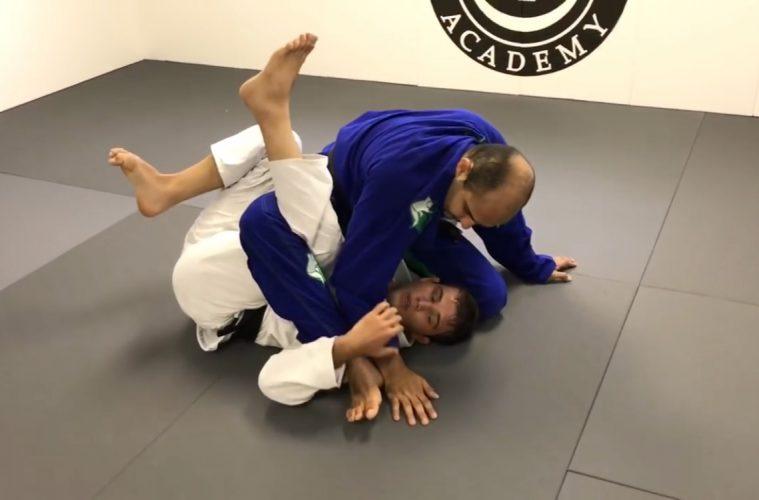 The reason why the sweep is so effective is mainly the deep half guard. This half-guard variation actually defies most half-guard rules. For example, a cardinal rule of half guard is to never have your back flat on the ground. In the deep half, it is a prerequisite. Moreover, this particular aspect of it allows you to set the waiter sweep up at will. In fact, the deep half is a lazy guard of sorts, one that doesn’t require more than just placing grips and hooks.

Speaking of grips and hooks, the same principles make the waiter sweep so powerful. The principle is simple, first, get underneath. That is something you achieve with the deep half guard. Secondly, get leverage for a sweep. To achieve that, you isolate one leg and strategically place wedges around it. For the waiter sweep, that means having one of your hamstrings on the inner thigh of your opponent, while firmly controlling the ankle on the same leg. From there on, it is open season!

Sweeping with the BJJ Wiater Sweep is as easy as doing a rocking chair motion while extending your leg. It is unstoppable and guarantees you’ll end up on top. However, following up with a solid position or a pass can be challenging The leg entanglement that makes it so efficient as a sweep, turns into a problem when you end up on top. However, there are plenty of great solutions to this particular problem. For instance, there’s absolutely no need to sweep at all.

You can set up devastating submissions right there from the spot. Moreover, you can hunt for better offensive positions like different guards or even back control as well. In fact, once you’re in the waiter sweep, direct sweeping should be your last option, as that’s something you are guaranteed to get. Let’s explore some of these options.

At first glance, you might find similarities between the BJJ waiter sweep and Berimbolo-like movements. That is due to the hooks around one leg, and the fact you’re using the leg as a lever. So, since the mechanics are similar, why not use the waiter sweep to get from a deep half guard straight into back control? For this setup, you want to control the ankle of your opponent in your elbow crease, rather than holding on to the pants. From there, you want to roll to the outside, completing a full 360 roll on the ground. When I say roll, I mean rolling like a log, rather than forward/backward rolling.

The moment you complete the roll, you’ll actually end up behind an opponent with one hook in. All that’s left it to get the seatbelt.

Another transitional option from the deep half guard waiter sweep is actually maneuvering yourself into the X guard. AS an open guard variation, the X guard hs lots more attacking options to offer, plus added maneuverability. Getting there might be because you want to, or because an opponent opes it up for you. In any case, think of it like this: you go to the X guard and variations from the waiter sweep in order to attack, and, if it doesn’t’ work you, you can still go back to the dep half or the waiter sweep and try a different direction.

For this particular transition, what you need is the opposite of the back take – a pants grip. This grip will allow you to elevate the trapped leg in order to get your free leg on their opposite side hip. This pretty much lands you in the X guard. The opponent will have to focus on getting up if they do not want to end up in a leg lock or swept. That said, those are the two most probable outcomes even if they do get up on their feet.

In terms of straight leg locks, there are no options worth exploring there are a few that you can hunt for from the BJJ Waiter Sweep but they’re low percentage. Instead, you should use the waiter sweep to get to a position that actually opens up plenty of leg attacks. Moreover, once you get an Ashi Garami, completing a sweep or going into a pass becomes that much easier. For that purpose, the goal from the waiter sweep position is to get an outside Ashi Garami. Getting it means you have to go for the basic sweep. As we already know, that’s not hard to execute. However, once you get the opponent’s hips to the ground, untangling to get up can be a mess.

Instead of looking for that, you simply wrap both your legs around the other leg of the opponent. To clarify, that’s the leg you weren’t doing a sweep on. From there on, you can attack from outside Ashi Garami, or transition into Rear or Cross Ashi variations. Conveniently, you can also get up to pass much more reliably from there.

For those that enjoy using the BJJ waiter sweep as a means to get top position, it is always worth exploring how to end up straight into a dominant position. And, when it comes to guard passing there’s hardly a much better spot than the leg drag. However, you’ll need to modify the sweep slightly in order to make sure you get on top hassle-free. Once again you go for a deep pants grip. This time, though, instead of simply sweeping up, you’re looking to extract your leg from underneath. As long as you have a secure pants grip, you’re safe from any counter-attacks.

The goal is to use the leg that’s not free as a pendulum, gaining huge momentum to sweep. Due to the position of your legs now, instead of engagement, you actually end up directly in the leg drag. Whether you pass or hunt for leg locks from there is entirely up to you.

This one is a real treat. When it comes to submissions that open up directly from the BJJ waiter Sweep position, it doesn’t get better than this. All you need to do here is sneak in your free leg. To do that, you proceed to the side, looking to extend the leg you have trapped in the waiter sweep position. At the same time, aim to keep the free arm on their lapel, in order to create distance. Once you have that, it becomes extremely easy to sneak the other leg on top of the far shoulder. Given the waiter sweep’s original position, the other leg is already in place for a deep triangle attack. Quick, easy, and very sneaky.

The BJJ waiter sweep is one of those positions that we all think of as a one-off move. However, it is much more than a sweep. In fact, it should be a position of itself, since you can actually stay there safely for a while, Moreover, there are so many more attacks that come out of it apart from just a sweep. next time you find yourself in this position, you’ll have several cool and effective options to try.

X Guard: Do You Know All The Possible Variations?