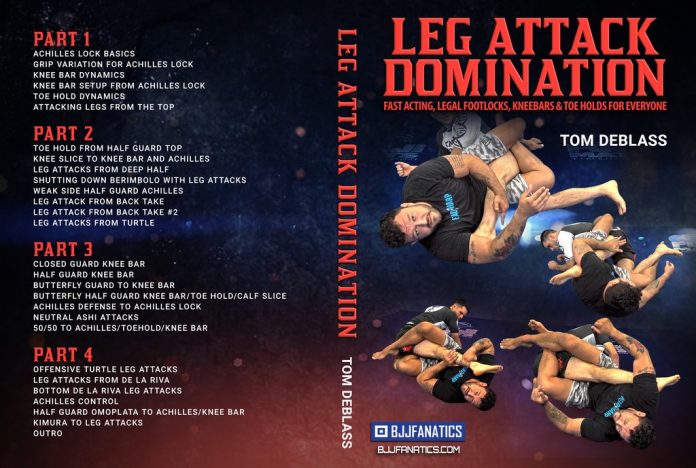 One of the universally most likable people in BJJ and also one of the most dedicated coaches out there have a real treat for us all! Tom DeBlass is a name everyone in the grappling community knows by far. What’s most impressive is that everyone positively knows him. In other words, he is one fella that’s extremely hard to hate on. That said, he is also a coach of the highest grade, able to teach high-level JIu-Jitsu to anyone. In fact, he is so keen on teaching that he has one of the largest DVD collections ever put together by a single coach. And he is far from over. His latest installment, though, is one everyone will appreciate, especially after the recent events in the ADCC absolute division. Welcome to the latest Tom DeBlass DVD instructional review of his “Leg Attack Domination” DVD.

Whatever Tom DeBlass has to teach, I’ll be listening. So far, he has a bunch of crazy good DVD instructionals, the likes of the “Butterfly Half Guard” and “Submission Escapes“, to name a couple. In essence, everything that man has to offer is pure genius. However, this last one is something else. As a Ricardo Almeida black belt and a regular at Renzo’s, Tom’s knowledge of leg locks I second only to the Dark Lord Danaher himself. As such, everyone has been urging him to release a leg lock DVD. And, the release of the “Leg Attack Domination” Tom DeBlass DVD Instructional has the best possible timing – right after a crazy ADCC. Without further ado, let’s see what Tom has for us in this brand new four-part BJJ instructional.

Why Everyone Loves Tom DeBlass

Different people will probably answer differently to this, but one thing is for certain – Tom is one of the best people to learn from. As a modern-day coach, he has the perfect approach to things. If there’s one thing that really stands out about him is how humble he is the man teaches everything, from kids’ classes to competitor-specific sessions, and even finds the time to clean the mats of his academy. That’s an example of a true modern-day samurai and martial artist if ever there was one. Still, there’s a lot more from Tom, and this latest instructional is just one example that he has lots more to contribute to the community.

Tom is a black belt under Ricardo Almeida, who in turn is of the famous Renzo Gracie lineage. There’s not much needed to say about this lineage, as we can all see who is dominating the world JIu-jitsu scene at the moment. Tom is also famous for being the coach of Gary Tonon and Gordon Ryan in their early days before they went on to join the Danaher death squad. Make no mistake, though, Tom is not only a coach but also a highly accomplished competitor himself.  He is a No-Gi world champion, ADCC veteran as well as a retired UFC heavyweight.

Currently teaching out of Ocean County Jiu-Jitsu (his academy) Tom is extremely busy. He is in high demand, doing interviews and teaching seminars whenever he is not at the academy or helping Tonnon and the Ryan brothers when they compete. And, in the midst of it all, he has a fresh DVD ready every couple of months. The latest “Leg Attack Domination Tom DeBlass DVD Instructional is now about to join his ever-growing collection, bringing a new dimension to leg locking.

While you might think that learning leg locks from Danaher is the top of the mountain, you’d be surprised how high up that same mountain Tom DeBlass is. He has been doing them for years, even before they were so popular in both BJJ and MMA. Plus, let’s not forget that tom is constantly training with the monsters at Renzo’s NYC Academy. That means constantly rolling with Tonnon, the Ryan brothers, Nicky Rodriguez, etc. Not an easy thing to accomplish even for a heavyweight black belt of Tom’s pedigree.

That said, Tom is not just one of those leg lockers that specialize in only one submission. On the contrary, he is a master of everything, legal and “illegal”. Moreover, he has a deep understanding of the Ashi Garami positions. So much so, in fact, that he has several modifications and a whole host of unique entries. It is all in his latest ”Leg Attack Domination” Tom DeBlass DVD instructional. And, there’s also an aspect of leg locking in there that nobody has covered so far – counter leg locking. Plus he really loves leg locks, making him someone you don’t want to mess with.

Welcome to the new era of BJJ leg locks!

With any tom DeBlass DVD instructional, you’re pretty much guaranteed to get a DVD of the utmost quality. “Leg Attack Domination”, though, takes things to an entirely different level. This is not just a specialized leg locking DVD to teach you a few moves to surprise people. This is also not a leg lock specific system that only covers all the leg lock variations that tom uses .instead, this is a way of integrating high-level leg lock attacks into every aspect of your Jiu-Jitsu game. That means that you can hunt for leg locks from almost anything else you’re doing or vice versa. Tom’s approach is certainly an advanced one, but the way the information is presented is suitable for everyone. And, yes, while this is a No-Gi instructional, she submissions themselves are all IBJJF approved moves that are perfect for Gi grapplers.

The instructional has a total of four volumes, which is pretty much the norm nowadays. IN the first one, DeBVlass covers everything you need to know, and then some, on the subject of finishing Achilles locks, kneebars and toe holds. Volume two goes into setups, offering some crazy offensive and counterattacking leg lock strategies. Volume three is arguably the most interesting one, featuring lots of leg lock hunting from different guards. Finally, the turtle position and advanced positions like De La Riva guards feature in the final portion of this Tom DeBlass DVD Instructional.

Kicking the instructional off, Deblass starts by sharing some key tips on the mechanics of breaking legs. In that sense, he starts right at the beginning – with the ankle lock. In the first few chapters, it is all Achilles lock, covering grips, basics, and interesting setups. Following suit is the kneebar, and Tom really gets into how the dynamics of this position actually work. Moreover, he ties everything together beautifully by showing you how to set up kneebars from a previous Achilles lock attack.

Summing up the trio of leg locks that make up most of the “Leg Attack Domination” Tom DeBlass DVD Instructional, there are also a couple of subjects on toe holds. Once again, it is dynamics first, and a few interesting setups later. The final chapter is on attacking leg locks in a safe and high-percentage manner when you’re the one on top.

Part two starts with an awesome toe hold from half guard. The half guard, both top and bottom is Tom’s bread and butter along with leg attacks. So, any tips he shares on those two subjects, particularly in unison, is something you need to be paying close attention to. No surprise, this move works perfectly, as I’ve already discovered in training.

Keeping up with leg attacks from the top, the next chapter goes into kneebars and Achilles locks off of the knee slice position. There are even a few leg attacks from the deep half guard, which is a true rarity. The one part of this particular volume that most people will enjoy is the instructions on shutting down peribolos with leg locks. Let’s just say no one is going to invert on you any longer. Wrapping up are several leg locks that work off back attacks, including the turtle.

We’re past halfway in this Tom DeBlass DVD Instructional, and it is time to look into attacks from guard. You’ve probably never thought of attacking leg locks from the closed guard. Well, Tom not only has, but he also has a perfect way of doing so. His closed guard knee bar setups are followed by a few butterfly guard attacks. Those involve just about everything, from toe holds to calf slicers.

This part also addresses the highly important subject of defending the Achilles lock. Still,  instead of escaping, the “Leg Attack Domination” DVD will teach you how to respond with an Achilles lock of yourself. There are also chapters on how to counterattack when you’re both in Ashi Garami, as well as options from the 50/50.

The final part of this instructional offers leg locking options from several different advanced BJJ positions. Opening up the account are surprise leg attacks from the turtle position. Following suit are De la Riva attacks, mostly from the bottom. There’s also a very cool Omoplata to Achilles lock/kneebar combo that all but ensures you get a submission finish. A huge portion of attacking leg locks off of a Kimura grip wraps things up. However, not before Tom goes deeper into the Achilles lock, this time explaining how you can control the lock.

What can I say except this is a Tom DeBlass DVD instructional that you need to own? While this holds true for anything he has ever released in DVD or digital format, the “Leg Attack Domination” DVD is something that you can implement straight away. It doesn’t matter if you roll with the Gi, No-Gi, or like to work from top or bottom. This instructional will give you options to widen the scope of your BJJ game indefinitely.