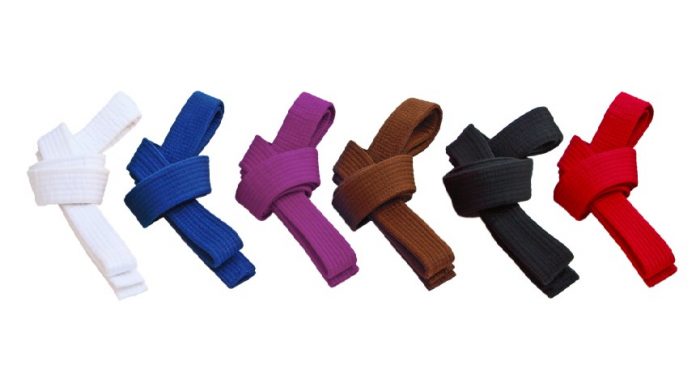 This is one post I bet is going to spark some controversy. One reason for that is the nature of the subject – BJJ belt promotion. Moreover, there are bound to be people reading this that are on different sides of the story. As such, please feel free to give us your thoughts on the subject. As for now, I’ll share my two cents on the subject of BJJ belt skipping, how most BJJ people see it and whether or not it is fair, or disrespectful. Speaking of which, we’ll take a look at the belt system of BJJ and ask a very important question – is it still as relevant as it once was?

BJJ belts are the utmost source of pride for grapplers. It doesn’t matter how many submissions you get in a roll, or how many medals you win. Those are certainly big accomplishments, but they’re most often fleeting ones. One that stays with you, at least until your next promotion, is your belt. If you train BJJ the right way, at a proper academy, you’ll need to work for each and every belt you get to wear. In other words, you’ll need to deserve them. Well, But is it fair?

Let’s recap the BJJ belt system for just a little bit. There are five BJJ belts that everyone has to go through. As with most other martial arts that have a belt system, white is the first one. You have that the moment you enter the gym. The belt that comes next is the blue belt, the most desired belt in all of Brazilian Jiu-Jitsu. Why? Simply because nobody wants to be a beginner. Even though people at a blue belt are still at the beginning of their journey, they’re not complete beginners anymore.

Right after the blue belt, grapplers get the coveted purple belt, the mark of becoming an advanced BJJ practitioner. This is where most people really start training and discovering the art, building their own style, and eventually, legacy. The brown belt is next, offering grapplers some time to clean up certain parts of their game before they get the promotion to black belt, something that not many people end up achieving. And still, there’s more. If you remain a black belt for 40 years, you’ll earn the coral belt, which is, realistically, the highest Jiu-Jitsu honor you can get. There’s also the red belt that comes after the coral one, but not many people can live long enough to achieve it.

The usual journey people take is the one between white and black. In terms of promotions, in BJJ an instructor is going to call you out and tie the next belt around your waist when you’re ready. If the academy is not a McDojo and the instructor is legitimate, you’ll most likely need a couple of years between belts. That means getting a black belt takes an average of ten years. You can see how BJJ belt skipping can be offensive now, right?

As BJJ spread around the world, as expected, it started becoming controversial in certain areas. With so many people training, and many looking to cash in from the sport, everyone is looking for shortcuts. To that extent, BJJ belt promotions are controversial subjects on their own. Th certain people giving (selling) belts out online, or simply giving them away for a certain price, this that really derve them tend to frown. And they have every right to do so.

However, there’s one more “trend” nowadays, that’s questionable, to say the least. That is BJJ belt skipping. One example I’ll use is going to be Daniel Cormier. To make things clear, I have nothing but admiration for the UFC veteran. He is an MMA world champion and one of the best wrestlers in the world. While he has been training in MMA and wrestling for decades now, he never really went through the ranks in BJJ. Just recently, he got his brown belt directly, skipping over the blue and purple belt periods. Cormier’s case is just the last in a series of similar ones, where MMA fighters, Judokas, and wrestlers get belts without really going through the system.

Is BJJ belt skipping merited in these situations? Yes, we’re talking about world-class athletes that have used grappling to fight some of the best in the world. There are instances, like Antony Pettis catching black belt Benson Henderson in the UFC, where belts didn’t really make a difference. However, Pettis, for one, never claimed to be a higher belt than he is. Jon Jones, as well, is another one who trains in the Gi and is going through the entire belt system. While people might have experience in grappling, si ti enough to earn them a BJJ brown belt straight through the door?

As with most things in BJJ, there are two schools of thought. One suggests that people need to go through the system belt by belt, and show respect. They do not have to spend two years at each belt, but they do need to spend time at each. Personally, I support this approach. There’s a commonly accepted moment in IBJJF tournaments that I’m all right with. If someone is a Judo black belt or has had pro MMA fights, they can enter a competition as a blue belt. That’s ok with me. For people that have spent a lifetime in fighting, starting as a blue belt is more than fair. However, BJJ belt skipping from start to end is unacceptable.

That said, is the BJJ belt system still the marker of BJJ knowledge and level it once was? Just a couple of weeks ago we saw blue belts submitting multiple-time world champion black belts at the ADCC. And while some of those involved did receive new belts as a result of their success, there was no BJJ belt skipping. Nicky Rodriguez got a purple belt at the podium, and Nicky Ryan got his brown belt a week later, to name a couple.

To be fair, BJJ belts really do not demonstrate how skillful someone is nowadays. With many different schools and approaches, plus exclusive Gi and No-Gi schools, it mostly comes down to effectiveness. Still, even in cases where the lines are blurry, going through the ranks is the least we can do. It is a great way to keep an order to things and show respect to our roots, both the Brazilian and Japanese ones.

If it is not clear by now, I’m a proponent of the ‘BJJ Belt Skipping is not OK” camp. As such, I think everyone needs to go through the ranks, even if they only spend a few months at each belt. It is a way of acknowledging how hard the journey can be for everyone else. Earning the rank of BJJ black belt should carry a lot of weight. Even though belt rank does not outline how much more ceratin grappler knows compared to others, as it once did, the belt system is still very important.