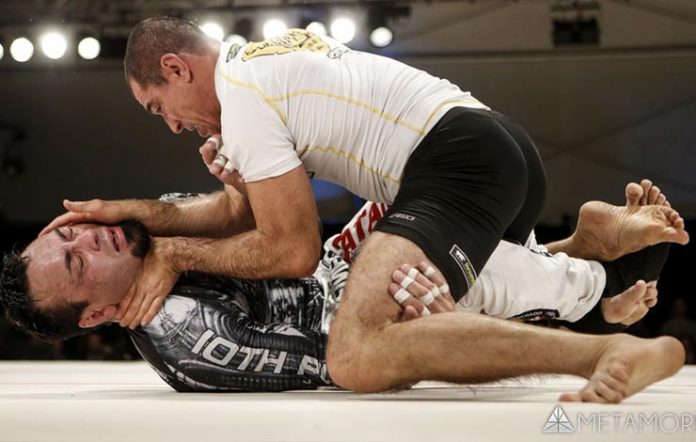 Certain positions in Brazilian Jiu-Jitsu seem to be designed just to annoy the living hell out of you. Just think about it. The lapel guards like the worm guard are just one obvious example of such hideously boring positions. However, even those tedious lapel guards have nothing on moves that work in both Gi and No-Gi. The moves that transcend the Gi border are usually those that people are after, especially those with more experience. Now, annoying positions do not necessarily mean ineffective positions. IF you’re playing them, then you can use them to stall, sweep, submit or simply transition, depending on the position. But if you’re caught in one and the opponent is defensive, be prepared for a long roll. Once such a position that makes guard passing a nightmare is the half guard lockdown.

The half guard lockdown is an old half guard position that, to this day, still presents a hard puzzle to solve. Whenever people are up against it, they seem to be at a loss for options. It is a half guard variation, but it seems that all the half guard passing principles do not work. Well, that is the point of the lockdown. it is a brainchild of the one and only Eddie Bravo, the founder of 10th Planet Jiu-Jitsu.  It is likely influenced by the work of his teacher, coral belt Jean Jacques Machado. The point of the half guard lockdown is exactly that – to lock you down in place. Once you’re all secure and have nowhere to go (read: pass), the opponent can start working on attacks.

You can see the Catch 22 here, right? Your opponent has you in a secure position which you can not pass, even if they’re simply holding you in place. Then, they add attacks which you need to fend off, on top of trying to solve the lockdown puzzle. it is an impossible position to be in, hence all the frustration when a very good lockdown player gets you there. But, this is Brazilian Jiu-Jitsu, and every “why” has a “because”. The half guard lockdown is no exception and there are some passes that people attempt out there. Some of them work better than others, and we made a selection of the three that have the best rate of effectiveness.

What to Expect From The Lockdown

The half guard lockdown is a half guard position that is fairly easy to establish. As such, even beginners can be a nuisance from there, in terms of keeping you in place. Attacking requires a bit more experience, though, and is a trait of more advanced grapplers.

The first and main difference between the half guard lockdowns and a regular half guard is the positioning of your legs. Namely, while your legs are on the outside of your opponent in most cases, with the lockdown they’re on the inside. Not just on the inside, but in a very specific position. The name is due to the fact that your legs are crossed, inside leg over the outside. In addition, the inside leg also hooks the opponent’s leg at the ankle, providing incredible holding mechanics.

So, what should you be wary of from the lockdown? Well, first and foremost the position of your hips. The higher your hips end up on the opponent’s body, the worse position you’re in. Moreover, you need to be careful of your free leg. Once the opponent gets an underhook with their arm on it, you’re past the point of no return and you’ll get swept with the electric chair. What’s worse is that, if rules allow it, you’ll end up tapping to a crotch ripper as well.

Passing The Half Gaurd Lockdown

The half guard lockdown seems fairly simple as a position, doesn’t it? Well, it is simple, but it also has a lot of components to it, making it a nasty trap. The lockdown is like a spider web – the more you fidget and move, the more you tangled up you get. Instead, passing the lockdown needs to be simple and minimal.

There are two main areas that you’ll notice in all three passing options that we have on offer today. First of all, your hips must never cross the hip line of your opponent. If they do, your primary and immediate task is to get back as low as possible. Next up, you will stay as still as possible and make minimal movements. The thing with the lockdown is that attacks are hard if you’re doing nothing. So move as little as possible to adjust your positioning and, even when you pass, avoid doing any excessive movements.

The hips switch pass is one that works for sure. How do we know it works? Well, it is the favorite way of passing the half guard lockdown of the legendary Bernardo Faria. And, if someone understands the half guard and passing, it is the 5 x World Champion.

The hips switch pass works by rooting yourself into position until you deal with the lockdown. For that, there’s nothing more important than keeping the hips low and placing the knee fo your trapped leg on the mats. It is going to be the major pivot point so make sure it’s glued tight. This’ll give you enough space to neutralize their hook by simply lifting your foot towards your butt. From there. you have the space to maneuver into a pass by switching your hips and placing the foot between their legs and their butt. Now, your safe from the lockdown and ready to demolish what’s left, of their guard.

Bernardo Faria has a complete DVD set on how to pass each and every guard variation in BJJ. Check out the “Battle Tested Pressure Passing” DVD for a comprehensive guide into the art of brushing past your opponent’s guard with ease. Learn from the best, at a cut-price that’s available once in a lifetime!

The scissor pass is one of the simplest ways of passing the half guard lockdown. Once again, it’s all about keeping the hips low and methodically untangling your feet. For this variation, though, you’re going to use a bit more movement than before.

For the scissor pass, the goal is to end up in hip switch position before you attempt to pass. Remember that if you do not establish a strong cross-face immediately, you’ll have to go back and try again or get swept. If you hit it right away, though, just stay there and work to unlock. Use your free arm to put pressure on their far side hip and scissor your legs. this is going to bring the locked leg behind, and the free leg (your bottom one) in front. The aim is to hook their leg with your bottom leg and strip their hook off. Scissor your legs back into the starting position and you’re free and clear of the lockdown.

The shin circle is probably the most well-known lockdown pass. However, most people are usually attempting it from a faulty position, ending up on their backs as they do. As with the previous two passes, the shin circle requires your hips to be as heavy as possible, as low as possible.

For this position, you start off just like with the scissor pass. Actually, this is a great option to sue if they’re lockdown is too tight for the scissor pass. Here, once you switch your hips and establish a cross-face, you want to use your free arm to push down on their knee. This is going to create enough space for you to simply circle your shin out of the lockdown. Once again, the lockdown is not a threat anymore, unless you pick your foot off the mats.