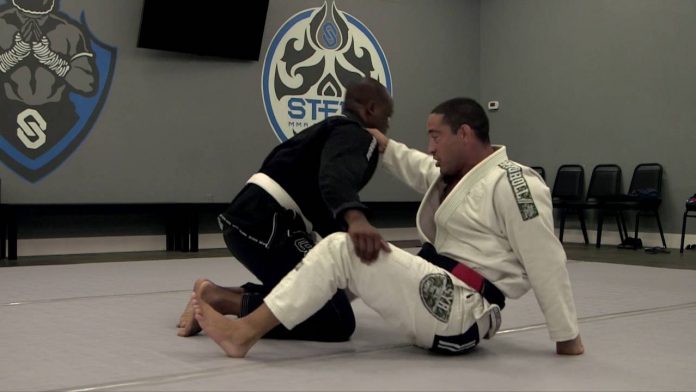 Playing guard in BJJ can be as simple or as complicated as you make it be. There’s a clear progression that we usually see here. At first, it is all about surviving so the closed and perhaps half guard are the options most people choose. As grapplers get to blue and purple belt, first they go into open guard variations and then straight into crazy land. After all the experimentation, once people get their brown belts they tend to look for simplistic ways to get what they want. Mind you, simply doesn’t necessarily mean boring, nor ineffective. On the contrary, there are certain guards that might seem like they do not even guard positions. Yet they work, especially at the highest levels of the game. One of those guards is the surprisingly simple collar guard. So, all you advanced purple belts and above, this one is meant for you.

Playing guard is fun! When if you’re not a fan of the guard, you still need to know how to deal with people when you’re n your back. With the collar guard, it’s mostly you on your butt, if we’re being honest. The original idea behind the closed guard was that of simplicity and control. While the closed guard offers both, it also requires quite a lot of work in order to set up attacks. namely, if you do not deal with the opponent’s posture and base, you’ll have a hard time doing anything. Open guards are usually more attacking in nature, but lack the control of the closed guard. Somewhere in between, is a simple guard that delivers on both. That said, do not expect closed guard-like control, nor spider guard-like attacks from the collar guard. Instead, expect safety, ease of movement and effortless sweeps.

To make things clear, the collar guard is far from the ultimate guard in BJJ. there’s no direct substitution for it without the Gi, making it useless in No-Gi.  However, with the Gi it has an unusually wide range of applications. It can work as a guard, it can lead into takedowns from the top and it offers direct control from the top after a successful sweep. Furthermore, the guard’s mechanics offers a way to prevent your opponent from passing, while creating pain and discomfort literally without doing anything. And, most importantly, it is very easy to enter into either a closed or open guard variation from there or get back up to your feet in case you’re looking for a transition.

The collar guard is painfully simple to get, yet works like no other bottom position. The hardest part is getting the collar. For this guard, all you need is a cross collar grip on your opponent’s lapel. It is smooth sailing from there on.

For one, you’ll need to be on your butt, with your legs either in a butterfly position or a seated combat stance. Whatever the starting position is, you’ll need to change it constantly. Since opponents are going to be looking for a pass, you’ll need to switch sides of your base in order to stay in front of your opponent. This is made really easy by the control you have with your arm.

The arm you have gripping the opposite side collar should remain straight at all times. This is a crucial detail to make the guard work! You need a locked out elbow in order to have a strong frame. Furthermore, your knuckles should be right up against their collarbone, grinding up and down. This produces pain and discomfort, making the grip notoriously difficult to break. It also helps prevent any flying armbar/triangle attacks your opponent might be thinking of due to the extended arm. Speaking of the extended arm, as long as you keep your weight back and your spine straight you’ll have absolutely nothing to worry about.

Finally, your other arm should either post behind you in order to provide support for your frame, or you could look for additional control. there’s a variation called the collar and sleeve guard. The name pretty much explains it all. The free arm goes on their sleeve, taking away all their passing options as well as their posture. This variation is slightly better suited when playing the collar guard against a kneeling opponent.

Let’s start looking at some attacking options. Remember that his article is simply an overview of all your attacking options from the collar guard. In the future, we’ll focus more on some of them, analyzing them in-depth. For now, let’s just look at the options.

One of the easiest things to do from the collar guard against a standing opponent is sweeping. Since opponents can’t pass because of your collarbone frame, they’ll be looking to try and circle around. This is where the collar guard is particularly effective, as the same frame keeps your opponent’s from passing while allowing you to attack, Once you have a leg in sight, all you need to do is grab the heel and do a technical stand up for an ankle pick sweep. Now you’re on top, controlling the leg and the collar.

Hunting for leg locks is also fairly easy from there. Standing opponents caught in the collar guard have no posture, so moving them into certain directions is easy. Just like before, when a leg presents itself, getting to an Ahsi Garami is only limited by your knowledge of entries from different angles.

Submission wise, it is best if your opponent is on their knees. This helps them get some posture back but opens up more attacks. Loop chokes, for example, are right there for the taking. As are armbars, triangle chokes and Omoplatas from the collar and sleeve variation. Furthermore, against a kneeling opponent, the configuration of your legs changes, as you should have a knee shield up, This makes sweeping with basics, like the scissor sweep really easy.

Transitions And The Collar Drag

The beautiful thing about the collar guard si that you can use it to transition if you do not like attacking directly. For example, having a collar and sleeve means arm drags are easy to get. Once you have an arm drag, you can easily get the back and finish from there. Once again, numerous leg lock positions are also right there. You can get there just by reacting to your opponent’s movements, without having to set anything up.

Adam Wardzinski is a Polish grappling phenom who has one of the nastiest guard games out there. His butterfly guard works because it is simple, effective and leads to his favorite submissions – leg locks. In his “Butterfly Guard Re-Discovered” DVD set, Adam shares all his knowledge of this powerful, yet easy to use, BJJ guard. Check it out and connect it to the collar guard for a killer guard game nobody can solve!

A huge thing you can do is the collar drag. With, your hips open to the side of the collar you’re controlling, it is really easy to face plant your opponent on the mats. Just switch the hips explosively and pull with your arm. You’ll end up in side control, or in half guard, against half kneeling opponents. You could also use the collar grip to create space and get up and either hit a collar drag from standing (much more powerful) or go into a different takedown. The opportunities, as you can see, are endless.