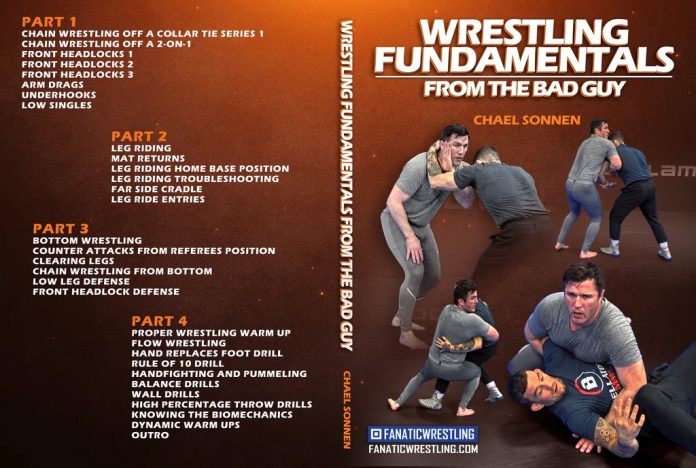 So, you’re looking to add wrestling to your BJJ but do not know where to start? There are several options out there, but if you want a proven one, you need two things. First up you need someone who knows which wrestling techniques cut it in BJJ or MMA settings. Secondly, you need a good teacher that knows how to explain things to perfection. well, with the Wrestling Fundamentals DVD you get both. the man behind it is no other than the ultimate MMA bad Guy Chael Sonnen. And the content of this DVD is guaranteed to lift your grappling game up a few levels immediately!

Chael Sonnen has always been an entertaining character to watch. Whether he was fighting inside the octagon, commenting fights or talking trash to promote fights, whenever he was on, people were watching. It wasn’t until that Ultimate Fighter season where he coached against Jon “Bones” Jones, though that we really saw how much martial arts knowledge he has. Chael Sonnen is not only a great fighter and a top of the notch shit talker. He is also a highly accomplished grappler that understands writing on a very deep level. His brand new Wrestling Fundamentals DVD instructional is the best resource for a BJJ grappler looking to add some strong wrestling to their game.

In terms of Chael Sonnen, I think no introductions are really required. Everyone knows him as the man to almost beat Anderson Silva while he was in his prime. He also had notable UFC battles inside the octagon as well as crazy rivalries with people like Wanderlei Silva that never got resolved on the mats. All in all, Chael is a fun guy that we enjoy watching.

The 42-year-old Oregon native has a professional MMA record of 30-17 so far. At the moment, he is on the Bellator roster, where he is coming off a loss to Lyoto Machida. He started his martial arts journey with wrestling, conquering many titles along the way, the likes of All American and the Dave Shultz memorial. This rich wrestling background later proved very important to his success in MMA. Sonnen began MMA training in 1997 and got to the UFC in 2005. He spent some time-fighting in other organizations before eventually returning to the UFC after the WEC merger. His last years were ridden with controversy, from steroids to a famous on-set scuffle with Wanderlei Silva.

After a short-lived retirement, Chael returned to fighting, signing for Bellator. So far, he lost to Tito Ortiz, got to beat his biggest rival Wanderlei as well as Rampage Jackson, and lost to Fedor Emelianenko and recently Machida. In the meantime, he put together a highly successful grappling promotion named Submission Underground. it features tag-team sub-only matches that are highly entertaining, Sonnen often competes in those events himself. The next edition of SUG is scheduled for July 7th with Craig Jones vs. Antony Rumble Johnson the headliner. In the meantime, Chael Sonnen also came out with the Wrestling Fundamentals DVD, which is on review here.

So far we know Chael Sonnen is a great MMA  fighter and an even better wrestler. That said, he has more than 20 years experience at the highest levels of MMA and even more in wrestling. That means that if anyone knows what’s going to work in a fight, it is Chael. To that extent, the Wrestling Fundamentals DVD focuses on wrestling moves that are ideal for BJJ. Even then, there are some modifications and adjustments along the way, which Chael demonstrates. That means you get both the wrestling classic move as well as the optimal modification for BJJ.

This Chael Sonnen DVD instructional has four parts to it. He covers pretty much everything that wrestlers know by heart. However, Sonnen only focuses on moves that work with the highest percentage. He kicks things off with some classics like collar ties and headlock and talks about chain wrestling. Next, he covers some groundwork, offering ways of pinning and controlling that are different from those we use in BJJ. Volume three is all about the defensive side of things, mostly covering the referee’s position, this gives a completely different dimension to escaping the turtle that BJJ grapplers will particularly enjoy. Finally, there’s something special happening in volume four, as you’ll see from our review below.

When it comes to wrestling Fundamentals there are hardly any that fit the description more than collar ties. The Russian 2-on-1, the arm drag, and the front headlock are the holy trinity of wrestling moves that work. Well, Chael brings all of them together, offering much-needed variations that fit BJJ and MMA needs.

The most impressive part is that he puts everything to use straight away. his concept on chain wrestling is actually in the very core of Brazilian Jiu-Jitsu. he ties everything up so good that you’ll end up catching even black belts with ease once you drill these moves enough times. There are a few front headlock chains that’ll surely change both your standing and turtle game. Moreover, there are some great underhook and low singles secrets in there that only seasoned wrestlers know!

Groundwork is an aspect of wrestling that really doesn’t get the recognition it deserves. I’m on a roll with using writing pins and controls in BJJ training. and I can tell you that they work like a cham. Chael Sonnen’s Wrestling Fundamentals DVD has a complete volume focusing on some crazy pinning and transitional grappling wizardry. Most of the volume focuses on leg rides. Those are in essence, slick ways of using leg entanglements to dismantle the turtle and get the top position.

Chale Sonnen covers pretty much everything concerning leg rides. From basic rides and amt returns to suing leg rides to get to the home use position. Once you see what he considers as a home base you’ll immediately have to try it. it is that good. Moreover, he has some incredible cradle entries that help you both pin and transition around an opponent.

The Referee’s Position AKA Bottom Turtle

Regardless of grappling martial art, escaping on the ground is by far the hardest part. however, you have the option of muscling out or using technical ways to get the upper hand. As expected, Chael Sonnen is a fan of the latter, and that’s exactly what you can find in volume three of the Wrestling Fundamentals DVD.

It all begins with the referee’s position, which is pretty much a turtle with extended arms. While this position is risky in BJJ, it is the staple of defense in wrestling. With the modifications Chael teaches, you’ll be able to take all the defensive power of the position and transfer it to the turtle. From options on clearing the legs to devastating counters, Sonnen sure has a great system of bottom position escapes! The chain wrestling concept when it comes to bottom defenses is groundbreaking, to say the least. Make sure you pay particular attention to this part!

Universal Principles And Drills Of Wrestling

This volume of the Chael Sonnen Wrestling Fundamentals DVD is by far my favorite! Here, Chael covers some crazy basic wrestling moves as well as going into the philosophy and principles of grappling. So, you get some crazy information on basics like grip placement and fighting along with key advice on flow wrestling. But that is not the best part.

This volume also contains some integral wrestling drills. As you might know, wrestlers are notorious for the amount of time they spend doping drills. Well, Chael covers all the most important drills, from pummeling all the way to wall drills, On top of that, he outlines the perfect wrestling warm-up that includes many different elements. What you’ll learn is how to get your heart pumping, integrate key technical drills as well as some crazy-effective quick throw drills.