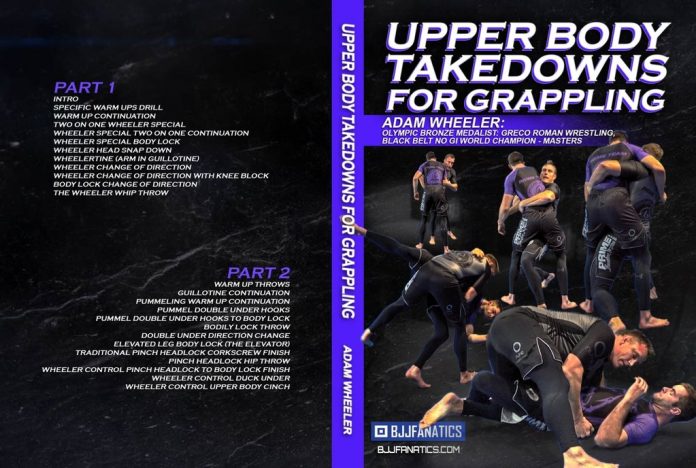 What are the best takedowns for Brazilian Jiu-Jitsu? Is it Judo throw,s wrestling takedowns or Sambo rolls? How about our very own guard pulling? Thinking in this sense is a great way to learn techniques. However, it is not a great way to find the answer you’re looking for. Instead, you should think about what’s the best way to engage someone while standing in BJJ? From there on, figure out how you prefer to engage people on their feet. Only then can you honestly figure out what the best way to take someone down is? In terms of fighting in a superior fashion, consider entangling with the upper body. Clinching is something most of us take for granted, so an Adam Wheeler DVD is here to clear up all the confusion.

Clinching while looking to establish dominance in the standing exchanges of grappling is as old as grappling. Even striking based martial arts like Muay Thai spends a lot of time working on the clinch. In BJJ, Gi or No-Gi, people almost always go for upper body engagement rather than attacking the legs first. Actually, this is natural, as it is a safer way to pursue things. Adam Wheeler is an Olympic medalist wrestler and a BJJ black belt that likes to explore the realm of upper body takedowns. After all, upper body entanglements take you right past grip fighting and most of your opponent’s defenses. Do they work? See for your self in the “Upper Body Takedowns For Grappling” Adam Wheeler DVD.

Adam Wheeler is one of those Travis Stevens types of guys that can take BJJ to the next level. He is a born and bred grappler, one that’s more comfortable entangled with another person than roaming on his own. The standout Greco Roman wrestler has a very legitimate black belt given to him by Carlos Machado. You can see how he is the person to turn to when in need of a rapid improvement in your takedown game. 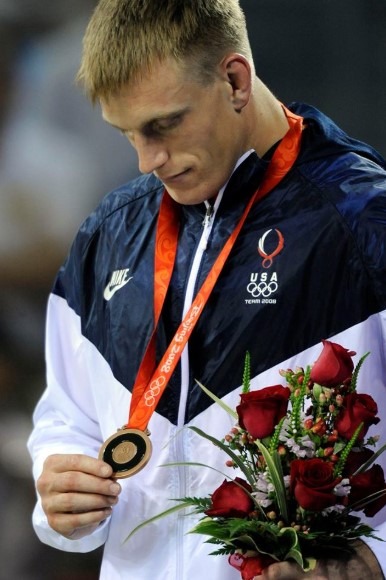 Adam’s grappling exploits start with Jiu-Jitsu, albeit of the Japanese variety. However, the grappling martial art of choice turned out to be wrestling. So much so, that Adam got a Bronze medal in Greco Roman wrestling at the Bejing Olympics. He put everything he had in wrestling but still kept training BJJ on the side, which eventually, brought him a black belt. So far, Adam has competed against some of the top people in Jiu-Jitsu, both in the Gi and without it.

Now a SWAT officer and a regular BJJ coach, the Olympic medalist decided to give video instructionals a try. And, if this first Adam Wheeler DVD is anything to judge from, he’s not going to stop there. He has immense grappling knowledge that should become available to everyone who’s addicted to grappling. And he chose the best spot to change grappling from – the standing game.

In all fairness, whenever we think about two BJJ people on the feet, we rarely think in terms of clinching. Still, at a certain point, the match is going to end up with one or both grapplers in a clinch variation. Wine this is going to happen inevitably, why not be the one that can make the most of it? Clinching is such a big part of martial arts for a reason – it works. The fact that it comes to us naturally is just a big bonus.

The thing with upper body takedowns is that they can feel a bit awkward at first. The main problem is in the distance. For both wrestling takedowns and Judo throws, despite shortening the distance, we still have to keep our hips away, or at a specific angle to the opponent. With upper body takedowns, the configuration of clinching means we need to have a great understanding of hip positioning. Being so close to an opponent opens up the possibilities of counters, especially if you do not know what you’re doing.

On the other hand, the clinch is one of the safest places to be. If the opponent has no training from the position, you just bypassed grip fighting, his takedown options and all of his defenses in a single step. Moreover, it’s a great way to keep control over somebody standing, and then extend that control to the bottom game once you get there. The “Upper Body Takedowns For Grappling” Adam Wheeler DVD is going to make upper body clinching for BJJ crystal clear even to complete beginners.

Mr. Wheeler’s digital instructional comes in a two-part set that’ll have you drooling for more. Yeas, that’s right, he did not explain everything there is to know about upper body takedowns in just one DVD set. However, what you get is a digested version of what works. As a bonus, you get moves that work at absolutely every level. The contents are organized very clearly and neatly, with no time wasted whatsoever.

All in all, this Adam Wheeler DVD is a crisp and clean product, with no fuss about it. you can tell that Adam was a high-level wrestler but by the intensity of demonstration and complete grappling dedication that he radiates. All in all, you need this DVD. It is going to offer you a great alternative to common BJJ takedowns. Moreover, it’ll catch even your coaches by surprise.

The very first thing Wheeler discusses in his “Upper Body Takedowns For grappling” DVD set warming up. Of course, a wrestler’s preferred way is going to be drilling. So, Adam begins with specific warm-up drills to get you in gear and ready for the takedown game. After all, training takedowns are the riskiest part of training grappling, so you should never skim a thorough and specific warm up.

The first technical thing Wheeler goes over is the two-on-one. While in BJJ people mostly perceive this as a No-Gi specific grip, it is much more. It offers control, as well as direct takedown options. Adam calls his two-on-one the “Wheeler special” and he provides a couple of takes on it. As you’ll witness further into the Adam Wheeler DVD, the Olympian likes to use his name in conjunction with most of the move she demonstrates. This makes them easy to remember and, in turn, execute.

Right after the two-on-one and the body locks specials, Adam heads over to the snap down. Of course, what comes next is a guillotine variation, dubbed the Wheelertine. It is an arm-in guillotine version that is going to help you get the fight to the ground and finish at will. The truly essential part of this DVD comes near the end. Before rounding everything off with the Wheeler whip throw, Adam goes over a direction changing. While this is easier to do and understand from a distance, it takes more finesse when in the clinch. It is an integral part of the standup game and one you must pay close attention to. Luckily, this volume has all you need to grasp this concept once and or all.

The second part begins with some warm-up drills once again; however, this time the exercises are different and include throws. Using them in conjunction with the material from the first volume is the best way of practicing them. After warming up, Wheeler further dissects the guillotine and how it can help your takedowns.

Another staple of grappling has the central role in this volume – pummeling. From warm-up drills to goals, execution, and variation, you’ll learn how to sneak your arms past your opponent both standing and on the ground. Of course, body lock throws and double underhook clinching follow suit very closely. Some incredibly cool front headlock options are next. They seem to have a place in a catch wrestling instructional as well. They’re brutal, effective and might get you to tap without even looking for one. A good example is a corkscrew pinch headlock throw.

The final technique listed in the second volume is the duck under. Better said, it is Adam Wheeler’s version of it, which is optimal for BJJ. All in all, the ultimate clinching guide for Jiu-Jitsu folks, and perfect for those that do not want to engage in a takedown exchange.