There’s no shortage of world-class coaches in modern Jiu-Jitsu. Up until a decade or so ago, real high-quality coaches were scarce. Now, every major city in the world has one. However, even amongst them, there are some that truly stand out. Marcelo Garcia, for example, is a guy like no other, both as a coach and a competitor. Others might not feature so much competitively as they do in the role of professors. Of course, one such person that requires no introduction is John Danaher. He has accomplished so much, that even his black belts end up joining the stable of world-class grappling coaches. One such man is Firas Zahabi, a true innovator in the world of Brazilian Jiu-Jitsu and combat sports in general.

A few years back, I only had a vague idea of who Firas Zahabi is. To me, he was an MMA coach, based out of Montreal, Canada. His biggest accomplishment was guiding Georges St. Pierre to glory and making him one of the most legendary champions the UFC has ever seen. However, since GSP had Danaher as his Jiu-Jitsu coach, it never even occurred to me that his MMA coach can also be a world-class grappler. It just shows how we take things for granted, both in life and BJJ.

Back to Firas Zahabi. A black belt under my professor once told me that Frias is actually a black belt in BJJ and a great one at that. Since I really looked up to this black belt, (and still do) I decided to research Firas a bit. That’s when I came across his YouTube Channel and the Universal Jiu-Jitsu series. IF you haven’t seen them by now, check them out. You’ll find plenty of things there, including one of the sickest guard modifications in grappling!

Firas is a guy who, like most of us, was interested in martial arts from a very young age. He trained multiple disciplines but had a very unusual approach towards martial arts. Unlike most of his contemporaries, Firas Zhabi never really got into martial arts for the fighting aspect. He was intrigued by the arts themselves and ended up dedicating his life to them. Now, he is the head coach at the Tristar Gym in Montreal, a modern-day stable for top-level grapplers and MMA fighters. 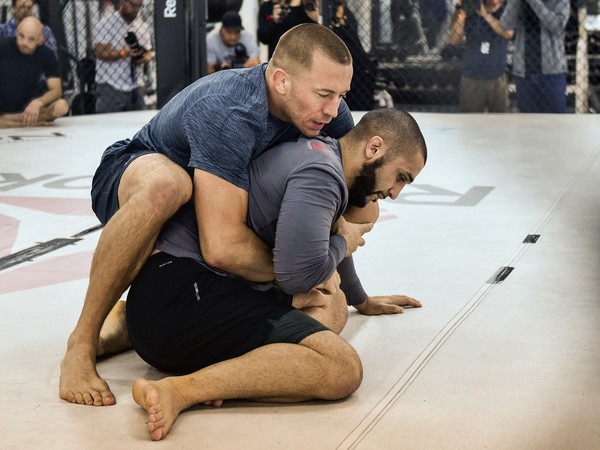 Taking into account the analytical approach Firas has towards things, it is not hard to connect him to Danaher. One might even go as far as the claim that the two were made for each other. Similar to his professor, Zahabi likes to dedicate enormous attention to details. However, he does so in a very specific way, looking at the essence behind the details instead of only at the technical aspects. This gives him a unique insight into both Jiu-Jitsu and other martial arts. It also makes him what he is today, one of the best martial arts coaches in the world.

Firas Zahabi is a formidable grappler, make no mistake about it. His open-minded approach means he includes everything in grappling, not just BJJ. he is a huge fan of wrestling as well and uses it to perfection when he rolls. He often focuses on a certain part of grappling, offering solutions to common problems. More often than not, some of his solutions involve innovation and adjustments of things grapplers take for granted. As is the case with one of the most utilized guards in BJJ – the Reverse De La Riva.

The Drawbacks Of The Classic Reverse De la Riva

The one major drawback of the Reverse De La Riva guard was always the placement of the free leg. One leg is deep in a De La Riva hook, there’s not much need for an explanation there. The other one, however, used to go on the hip. The first trouble with it keeping the hook there was the leg drag pass. Unless you had really good control over at least one of your opponent’s arms, leg-dragging was an easy way to get past the guard.

As the leg locking game came into prominence, the Reverse De La Riva suffered more than most guards. The placement of the free leg meant that it was open to leg locking submissions of all varieties. Form the deadly Estima lock all the way to Multiple Ashi Garami setups, the Reverse De La Riva started to gain the name of an unsafe position. Until Firas Zahabi took matters into his own hands.

Refresh your Reverse De La Riva knowledge with the help of Seph Smith. The Ryan Hall black belt is a true RDL wizard and now you can learn all his tricks too! ‘The Reverse De La Riva Almanac” DVD is the best complete resource on the subject out there. containing everything from basic mechanics to numerous attacking setups!

The Reverse De La Riva Lockdown is the brainchild of Zahabi, and it solves all previously stated problems. The modification that Firas Zahabi made, offers a way to completely prevent all kinds of pressure passing. for once. Furthermore, the Reverse De La Riva Lockdown successfully hides the free leg, while also using it to create a wedge. This gives you even better control over the leg you’re focusing on. Plus, it opens up som any new attacks.

The trick with the Reverse De La Riva Lockdown is easy. Instead of the hip, you place your second leg under the hook of your first one. This creates a “lockdown” position, keeping your leg safe from both leg locks and the leg drag. Furthermore, it provides great support to the hooking leg, allowing easier manipulation with the opponent’s base.

As Firas states, the key is in the angle. Once you have the De La Riva hook in, you need to hip escape to the side. this removes any slack between your leg and theirs, making the hook hard to break. The arm goes under your leg with a grip behind the heel. This prevents the smash pass and offers a great way of controlling the whole leg. Locking everything downturns this guard into one of the most offensive positions available in Jiu-Jitsu.

What You Can Do

Your options from the Reverse De La Riva Lockdown are even more numerous than form the classic form of the guard. Namely, off balancing your opponent is easier than ever before. The reason is that you now have two legs placed strategically on both sides of their knee. When you simply kick your legs over your head, you get an opening to spin to towards the back. it is worth noting that there’s no need for any inversion whatsoever, as your opponent will give their back away by themselves.

Next up, are sweeps. You can sweep to the side of the trapped leg with ease. All you need it to place sideways pressure on the opponent’s knee and you’re up. Moreover, if your opponent attempts to widen their base, you get even further options. The tripod sweep is right there for the taking with just a simple switch of your legs.

The best part about it is that you can enter into Ashi Garami from multiple angles. When you kick your opponent over your head, you can always entangle the legs instead of going for the back. Or you can go into the 4/11 out of a tripod sweep attempt. The opportunities are truly endless, and your legs remain safe at all times. Thank you, Firas!