The grappling world seems to get wackier as time goes by. First, we only had the usual, “vanilla” IBJJF Gi competitions to test out our skills. Later on, Metamoris opened a whole Pandora’s box by coming out with the submission-only format. From there on this format got associated with the No-Gi scene for one reason for another and caught on like wildfire. It took a while to find the best ruleset, which Eddie Bravo ultimately did with EBI. His ruleset got further adopted by many organizations, an even modified by some. Now, it seems there’s a whole new level of wackiness in the grappling competition scene. And it seems fun as hell too! Today’s focus is on the latest quantum leap in Jiu-Jitsu competition formats – the Quintet Grappling tournament.

Usually, when grapplers come up with grappling tournament ideas, they tend to come out successful. When the grappler in question is a true legend of the ground game, we expect nothing less. Even when it sounds dubious at first like the Quintet Grappling Tournament did. The founder of this innovative tournament format is non-other than Japanese grappling veteran Kazushi Sakuraba. The esteemed grappler, pro wrestler, and MMA vet clearly had some time on his hands which he used pretty creatively. He brought a pro wrestling component into an individual sport that’s based around teams, and arguably, hit the jackpot!

What the Quintet Grappling Tournament is all about is basically “tag team” grappling. No, it’s not like the 5 on 5 MMA madness we saw a few years back. This tournament is very well thought of and precisely organized. It features teams of 5 grapplers that battel under pre-determined rules, thus having always changing chances of victory! ANd this crazy new format already attracted huge name the likes of Craig Jones, Josh Barnett, The Martinez brothers etc. But will it catch on?

Learn the most effective choke setups for No-Gi from Austrailia’s premier grappling coach! Lachal Giles has a DVD out by the title “High Percentage Chokes: No-Gi” Form the guillotine to the Japanese Necktie, you’ll have everything you need for any kind of a tournament!

The interesting thing about BJJ competition is that is is an individual sport that only works with a team. There’s no preparing for competition without a good team, nor competing successfully without sound corner advice. However, once you step on the mats, the outcome is all down to you. But what if winning a tournament wasn’t down only to your success in a single grappling match?

The QUintet Grappling Tournament’s concept is that grapplers face their opponents’ as a team. Each event features teams of 5 grapplers, that have varying chances of victory, depending on each member’s success on the mat. Let’s look at the rules to gain some clarity.

First of all the Quintet is an invitational tournament held in No-Gi format (rashguards are mandatory). The competition’s format is based on the Japenese, pro wrestling “Survival Series” model. This means that a few 5 member teams, that have to fulfill certain conditions will battle it out between themselves.

The basic rules are that the weight of all competitors on a team must not exceed 946 lbs (430 kg). Furthermore, each team has their own order of appearance. The first pick of one team is going to go against the first pick of another, and so on. The time limit is 8 minutes unless there’s a weight difference of more than 33 lbs (15 kg.) IN that case, the total time of a match goes down to 5 minutes.

The victorious grappler proceeds to the next round in which he/she’ll face a grappler that has also won on the other side of the brackets. Only illegal moves are the closed guard and heel hooks. The way of getting eliminated is by losing, or drawing within the time limit. IN case of a draw. both grapplers get eliminated.

The Result So Far

While there are more rules than the above, we covered the gist of it so far. For the first tournament, Sakuraba employed the help of Josh Barnett for moth the competition format and on the mats alike. They were part of the “Haleo” team, one of four teams that fought for glory at the inaugural Quintet event. The tournament took place on April 11 at the legendary the Ryogoku Sumo Hall in Tokyo. Apart from the Haleo team, three other teams completed the roster. Those were the Sambo team, Polaris team, and Judo team. The glory went to the Polaris team, unsurprisingly, given that it featured Craig Jones, Daniel Strauss, Gregor Gracie, Charles Negromonte and Caol Uno. Runner-ups were the hosting Haleo team. 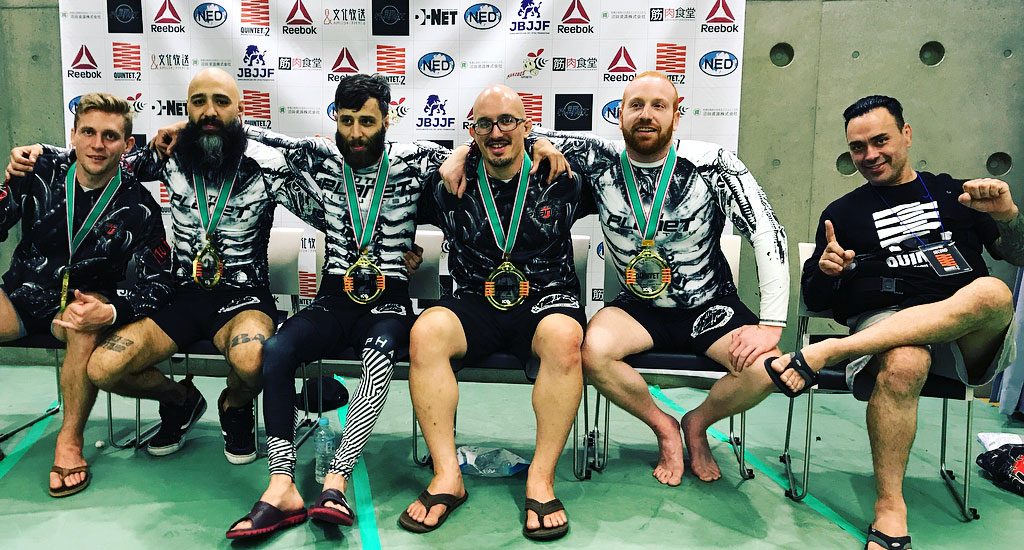 While the first event didn’t really get plenty of attention, the second one most certainly did. It took place just a couple of days ago and featured a whole new lineup of 5 man grappling teams. To be completely honest, I only got wind after the event, but it most certainly raised my appetite for the next one. Through some very very exciting matches, the 10th Planet Jiu-Jitsu Team got the best of Tiger Muay Thai, Reebok and Vagabonds teams.

The organization’s aim is to put on one more event in 2018, for a total of three. I will most certainly be looking forward to it and will take careful note of the build up. It seems to me, personally, that his format is a really fun one to compete in and it will certainly catch on. I can’t even imagine what this format is going to give birth to next, but for now, I’ll settle for Quintet Grappling Tournament 3.