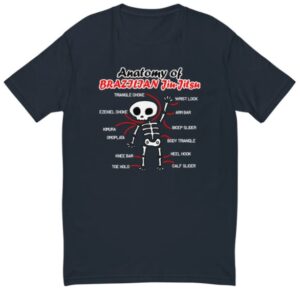 The subject of getting the fight to the ground in BJJ is one that has been beaten to death. We all accept that BJJ is not the most efficient grappling martial art for taking someone down. That said, it does present a solid obstacle for even the most proficient of takedown artists. BJJ players can be notoriously hard to take down when they’re the ones’ dictating rules of engagement on the feet. Throw in some BJJ takedown techniques into that and you’re going to be able to deal with everyone without much trouble. If you’re really interested in dominating every moment when standing you should look into the snap down.

Neil Melanson is one of the most complete grapplers in the world. he has extensive experience in catch wrestling, BJJ, Judo and Sambo. So when he issues an instructional, you get it and listen to what he has to say. “The Headhunter guillotine Series” is a DVD set in which he goes over everything headlock related, including snap downs.

So, what exactly is the Snap down? It is a simple and very effective method of getting your opponent completely out of alignment. The snap down is basically a way of getting your opponent’s head lower than yours. However, when I say lower, I mean really low. Like, face on the mats low. While this is the ideal version of events, in most cases, the opponent will react, opening up a host of attacks. Which is exactly why the snap down is a staple of BJJ takedown techniques.

The goal of any standing exchange is to conquer your opponent’s base or posture. In both circumstances, grips play a deciding role. Without them, there’s no way you’re going to get a takedown. The snap down requires you to have one arm on the biceps of the opponent’s arm, and another behind their head. Whether the arm that goes on their neck is inside or outside of their arm is not too important. Both ways work. The important thing is that the snap down position gives you great control over the opponent’s posture. As such, it is the perfect base for executing a number of BJJ takedown techniques. The Gi equivalent is a collar and elbow grip on the Gi.

To get your opponent’s posture down, you’ll need to put in some effort, though. Gi or No-Gi, you’ll have to manipulate the opponent’s base to get their posture broken. The principle of Kuzshi is key here. To get your opponent off balance, you need to stagger their feet first. The snap down gives you the mean to do so by simply going back and keeping your grips tight. Snaping the opponent down from there is all about fast and explosive movement.

Taking someone down with the snap down is actually a very straightforward thing. Once you have the grips in you simply step back and to the side a bit to destroy their base. Once you have it, use the arms to pull the opponent’s head and shoulders down. If you go to one or both knees during the process, your opponent will end up on the ground for sure. Even better, they’ll be in a turtle position, with a front headlock readily available for you.

Apart from a direct takedown option, the snap down is the perfect entry to unite a number of BJJ takedown techniques. If there’s one thing that the snap down offers for certain, it is that your opponent is going to end up bent forward. IF they resist the direct takedown, or you cut it short on purpose, they have very predictable options let. The instinctual thing is straightening up in an effort to regain posture. This, however, given the clinch (collar) grip is nearly impossible. It also opens them up to headlocks, arm drags, double and single leg takedowns, trips, Judo throws, and even submissions.

The snap down is more of a position zero for launching Jiu-JItsu attack than anything else. Yes, it is a very viable takedown on its own, but it works much better if you use it to launch other attacks.

Let’s now get into some specific examples of how the snap down can work for you. Firs,t we’ll go over a couple of No-Gi options, before turning to the Gi snap down. Finally, we’ll round off the snap down game with a very cool submission setup that doubles as a takedown too. Plus, it works in both Gi and No-Gi!

No-Gi Snap down To Double Leg

The very fundamental use of the Snap down is without the Gi. This is logical, as it is, after all, a wrestling move. From the basic head and arm tie, the goal is to execute the Snap down as before. Move your feet back sot hat you create space and focus on snapping the opponent down. In order to be heavy, you’ll also need to drop to your knees as you pull. This time, however, you’ll crouch low instead of dropping to the knees.

The moment your opponent’s head hits the lowest point, they’ll be looking to get back up right away. Since you’re looking for different BJJ takedown techniques, now, you’ll let them raise. as they do, remain crunched and you’ll find yourself ready to execute a power double without any effort. You can also always switch to a single leg from there, or any other low stance takedown you want.

The Russian Snap is one of the most attractive, yet extremely difficult and advanced moves to hit. Still, if you set it up with the Snap-down, your chances of getting it improved very significantly. The Russian Snap requires you to get lower than your opponent while using a wrist grip to flail their arm violently to one side. From there, the goal is to get it all the way to the other side as explosively as possible, while raising your torso. This creates a swinging motion that’s literally going to plant your opponent on the ground.

The snap down is the key part since it creates a position in which your opponent ends up fairly low. From there it’s not hard for you to get lower than them, and use the momentum of them raising up to execute the takedown.

With the Gi, the mechanics of the Snap down remain pretty much the same. All that changes is grip placement and how much you can off balance an opponent. Since the Gi creates some slack, if you’re really good at it, you can actually create more Kuzushi this way than in No-Gi. Furthermore, it opens up many more BJJ takedown techniques, as Judo throws now enter the frame.

The simplest thing to do is use the snap down a few times so that you break your opponent’s posture and tire them out. Then, when you decide it’s time simply stay on the ground with your knees as they attempt to raise. Unlike in No-GI, here the opponent won’t be able to get back up due to the collar grip. This means their head and knees are now really close, so an ankle pick on either leg is a piece of cake.

The train wreck is a takedown that is as powerful as it sounds. It is actually a Judo modification that is very specific to BJJ. And, the snap down makes it a lot more devastating. The idea here is to be relentless in snapping your opponent down, though. The goal is to truly shake your opponent up as you repeat the motion over and over again. Then, the best course of action is to threaten the foot sweep.

This will not only have your opponent out of posture due to the snap downs, but also off balance with one foot up. That means you can pull on the collar (with a cross grip) and the sleeve so that your opponent slams to the ground. This is probably the most powerful of all the takedowns stemming from the snap down.

Finally, the simplest thing with the biggest reward. If you manage to snap your opponent all the way down to a headlock, you can focus on finishing directly. Any front headlock choke will do from a position of a kneeling headlock. However, the guillotine choke provides the most bang for your buck. Especially if you executed a particularly explosive snap down. Even better, Gi or No-Gi doesn’t really matter as this works in both.

Finishing is also very versatile. You can finish by sitting down in a regular fashion or try to roll over or to the side. Whatever option you choose, you’ll have to mess things up really big to lose the submission from there.

This Is The Most Powerful BJJ Takedown Combo