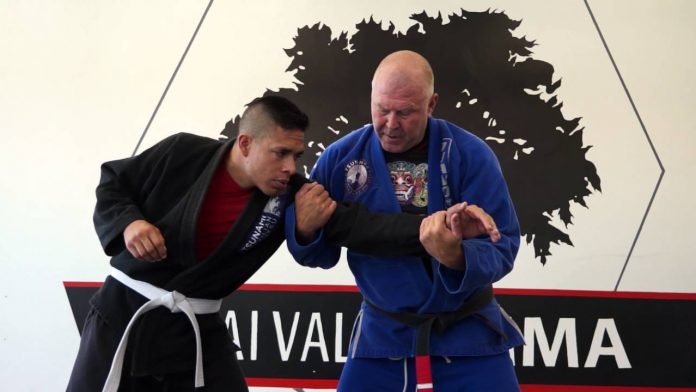 Wrestling moves are highly favored by Jiu-Jitsu players due to a few important reasons. First, they are very diverse and versatile. Second, they’re highly effective. Third, some of them do not take ages to get the hang of or even master. And finally, they work equally as well in both Gi and No-Gi. Among the BJJ takedowns with a wrestling origin, the double and single leg takedowns are by far the most common. There is, however, one more wrestling-based system that is a perfect fit for BJJ – the Russian tie.

Also known as the Russian two-on-one, the Russian tie is a wrestling position that is tailor-made for Brazilian Jiu-Jitsu. If you’re looking to improve your BJJ takedowns, this position is going to offer you a complete game plan. To begin with, it is a very effective takedown of its own. Furthermore, it opens up doors for a multitude of other BJ takedowns like ankle picks, fireman carries, and some wicked rolling throws. And last but not least, it opens up direct submission options thanks to its proximity to the front headlock.

In terms of BJJ takedowns, the Russian tie ticks all the boxes. It is fairly easy to learn, it’s applicable to all levels, and offers huge control over the opponent. Specializing in this move is going to make you better at all assorted BJJ takedowns as well. This is due to the fact that the Russian tie can work as an entry point to other takedown moves. Even better, entering into the position itself is arguably easier than entries for other types of BJJ takedowns.

The Russian Tie System For Jiu-Jitsu

The Russian tie is, in essence, a high control position offering submission or takedown options. This is highly similar to most BJJ positions where you have control and transition and/or finishing opportunities. Why this move is not among the first choice moves for Jiu-Jitsu layers is unclear. Although originally a No-Gi move, the Russian works just as effectively in the Gi as well.

With the Russian tie, you basically want to establish complete control over one of the opponent’s arms. This, in turn, leads to control over their torso and posture, which allows you to manipulate them easily. The two main aspects of the Russian tie are grip placement and finding the correct angle. The move works best when you are placed in the perfect position.

Gripping for the Russian tie is nothing new, as the principle is a basic two-on-one grip. You use two of your arms to control one limb of your opponent. Furthermore, you’re going to use all your body weight against their arm, placing it completely under your control. To get the Russian tie, one arm needs to go around the opponent’s forearm and grip their biceps from the inside out. The other arm goes low on the wrist, controlling the end of the lever.

In terms of angling, you need to be angled slightly to the outside of your opponent, your shoulder right below theirs. Paired with the grip, this position is really hard to get out of. For total control, you need to place the top of your head under the opponent’s jaw. From there, just lean forward so that your bodyweight breaks its posture.

Finishing the takedown is as easy as two steps forward, one step back, and a pull. You’ll end up in the front headlock against a turtled opponent.

Entries Into The Russian Tie

Entering the Russian tie is arguably easier than with most other BJJ takedowns. The basic entry works off the most usual hand placement position when standing. The collar tie in No-Gi or the sleeve and collar grip in GI are the usual starting points. That said, anytime your opponent has an arm behind your neck or high on your collar, you can think about getting the Russian tie.

Remember this one thing if you hope to become successful with the Russian tie system – hunt for an extended arm. If your opponent has a collar grip on you to push you away, they’re inviting the collar tie entry. In case of a collar tie, you’ll need to make sure you cause the extension yourself.  This is fairly easy to complete – simply open your body to the direction opposite of the arm you’re attacking. It’ll both open up the correct angle and allow for easy grip placement.

When gripping, go for the wrist grip first. Grip with the thumb near the side of their palm to guide their arm downwards. As you shift slightly towards their back, place the second grip (on the biceps). You’re now in the Russian tie. All you need is to push their head and distribute your weight.

Another great option to get to the Russian tie is off arm drags and as a counter to certain Judo throws, Once you understand how the position and the basic entry work, you’ll be able to obtain it from anywhere. Even from the guard.

BJJ Takedowns From The Russian Two-On-One

The whole point of the Russian tie for BJJ is to get you control. Once you’re in the position you are going to be able to control your opponent without any risk of counters. The Russian tie takedown itself, as discussed previously is the easiest and fastest option. However, there are lots of other BJJ takedowns up for grabs from there too.

One top option is a simple ankle pick. As your opponent reacts to the Russian tie, often times they’ll try to pivot back in front of you. This is going to open up an easy ankle pick takedown. Your best bet is going for the opposite side leg. You can also set the ankle pick up by faking an Uchi Mata from the Russian tie.

Another great option that ties into the previous two is the fireman carry. Whenever the opponent attempts to counter your pull from an original Russian two-on-one takedown attempt, what you’re looking for is an extended ner side leg. You can also cause them to extend it by forcing them to step back. Once the weight is on the rear leg, you just duck under and you’re all set for a fireman’s carry.

The Russian tie opens up much more than just BJJ takedowns. As you can see from the positioning, getting to the front headlock is as easy as throwing an arm around the opponent’s neck. You can do it from the turtle after a takedown or straight away. As far as match-ending moves go, once in a front headlock from a Russian tie, you can always roll under your opponent. That’ll send them straight over your head an lend you into mount. That’s six points right there and a mounted guillotine ready to go.

Check videos of setups and Takedowns from the Russian tie:

How Elite Wrestlers use the Russian Tie for BJJ / MMA
2 on 1 takedown by BJJ JOE
Russian Tie Throw by DJC WRESTLING
How to Secure 2 on 1 for more Takedowns
10 Russian Tie Up Set Ups, and Counters in About 2 Minutes